I bought this '49 Oldsmobile Futuramic Series 98 Sedan in 2016 thinking that I could rehab it. But, I am physically unable to do the work that it needs because I have MS. Therefore, I am reluctantly selling it.

I found some gas receipts in the glove box from 1968 and 1969 with the original owner's name and his sons's signatures on them. So, I took a chance and I was fortunate to find a phone number for the original owner, so O called it.

This car was purchased new on January 28, 1950from Royals Motor Service Company, Hampton, Virginia and it cost $2525 when new.it is legally a one owner car because the title is still in his name. The lady whom I contacted said, "Oh, the green Oldsmobile! My husband and I had our first date in that car!"

The original owner was an engineer at Fort Eustace, VA for NASA. It was the family car and his three sons drove it to school and college and dated their girlfriends in it.

The hood ornament, hood emblem, hood letters, deck lid letters, deck lid emblem and lock, right Futuramic emblem, deck lid emblem, handle & linkage, 2 hubcaps, 3 trim rings, right door trim pad, radio, and spare wheel &tire were missing. I bought used ones & installed them. However, the door trim pad is in poor condition but the moldings are in great condition and can be used to make a new one. The radio and door trim are still missing. The front bumper is bent and rusty, but I bought a good used front bumper that will go with the car.

The engine turned over when I bought it, but has since seized. I've put ATF and diesel in the engine in an effort to free it up.

Except for pin holes in the front floors and a couple of small dings, the body is rust free and straight. It has the original 2 tone green paint, but as you can see in the photos, it is extremely worn and thin.

Except for the right door trim pad and radio, the interior is original and complete, but it is dirty, worn, and shows 68 years of use. Remarkably, the original gray rubber front floor covering is still in tact. It is a good preservation, resurrection, or restoration project.

It has the famous, and nearly bullet proof, 303 Oldsmobile Rocket V-8 Engine with the 4-Speed Hydra-Matic Transmission.

The odometer currently shows 107,710 miles, which we believe to be actual, and it still has some of the oil change stickers on the left door and in the left door jamb verifying when it was serviced. I was told the original owner maintained the car meticulously.

The car is from Hampton, Virginia and was in Virginia from 1949 until 2016 when I had it shipped to Texas.

I installed a set of used radial tires and added the Port-A-Walls.

Thank you for your interest. 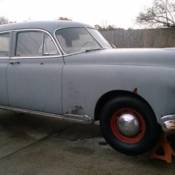 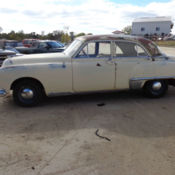 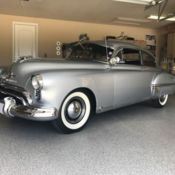 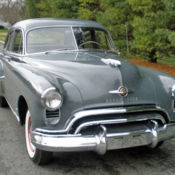 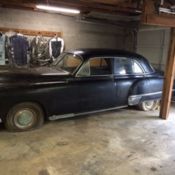 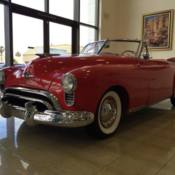 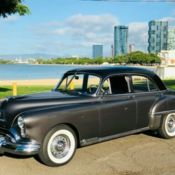 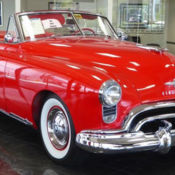 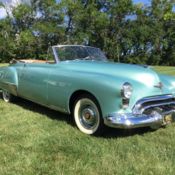 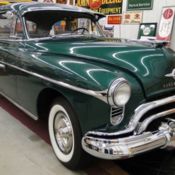