A chrome rear boot luggage rack has been added since the photos were taken.

There are not many better ways to get into a British roadster than this 1972 MGB convertible. It has classic good looks in a car that does not cost a fortune to acquire or maintain. So, it is the ideal vintage roadster for the purist who enjoys driving their classic.

It is easy to see why these cars are so popular. The sleek European lines with just the right amount of chrome give an MGB like this one a confidently regal appearance. Classic MG lovers know this was one of the last years to have the more desirable chrome bumpers that hug the form front and rear.

Car was built by the owner of the largest British Car repair facilities on the front range of Colorado. He had prepared the car for his daughter. Front end was rebuilt, new spindles for wheels as well as new wheels and Michelin tires. All shocks were replaced. The car drives very tight, engine has a great audible.

The car will also be sold with files of service records showing that at no time was any expense spared with regards to this vehicleâ€™s preventive maintenance and repair/replacement of parts.

Files of paperwork list all upgrades, repairs, and restoration in 2006-2012. A small sample list of the larger items includes.

This is one genuinely nice example of this classic British sports car - a beautiful and mostly all original and stock rust and accident free example of the legendary chrome bumper Mark III MGB roadster! The trunk, floorboards, rocker panels and all the typically rust prone areas are all solid and rust free, the chrome is good.

This car drives very well with no known issues! The engine purrs quietly under the hood and the 4-speed manual transmission shifts smoothly through the gears - an absolute pleasure to drive! The simple uncluttered lines of the early MGB's were never improved by later revisions (the MGB line survived until 1980) and it is still these early models, with the desirable attractive small chrome bumpers, which were a sturdy, and straight forward sports car with features that will fascinate enthusiasts for decades to come, that are most sought after by MG enthusiasts and collectors. There was no denying the appeal of the MGB which in almost all respects; performance, comfort, space and convenience was a distinct improvement on its predecessor, the MGA and despite of little or no profits being returned to British Leyland, the model enjoyed record sales for the company. Without a doubt you will look hard to find a better looking or daily driving example of this rare piece of British motoring history - perfect for the MG enthusiast or any classic British car collector!

These cars are liked because they are built for the driver. The dash is dominated by a full set of Smiths gauges with a large speedometer and tachometer, as well as dials for other vitals such as oil, fuel, and water. And if the weather is not ideal for wind-in-your-hair motoring, full roll-up windows and an easy one-handed folding top are quite convenient. Car also has original tonneau cover to cover the cockpit in inclement weather when the top may be down.
This is a desirable year and a desirable look for a timeless British classic. Time to get your hands on this MGB.

Seller will assist with buyers shipper as needed. 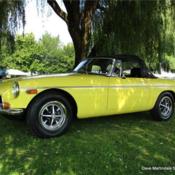 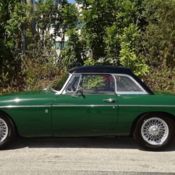 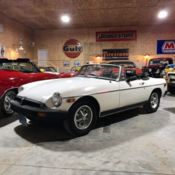 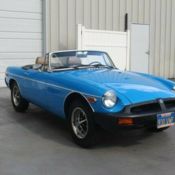 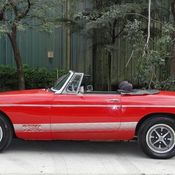 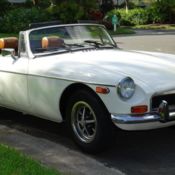 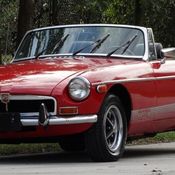 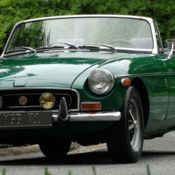 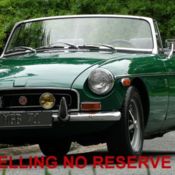 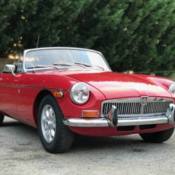