WOW!!! How is this for a radical ride??? This outrageously modified 1964 Mercury Comet Gasser harkens back to the early years of drag racing when attention-grabbing Gassers ruled the quarter-mile. This mechanical masterpiece, dubbed the "Filthy Greengo", was built on the Discovery Channel show Texas Car Wars, Season 1; Episode 3. If you've ever watched that show, or the many like it on cable television, you know that it takes the skilled hands of master craftsmen to finish off those builds to be presented to the world, and that is never more evident than in the terrific execution of this electrifying tribute to the good old days. The "Tale of the Filthy Greengo" is ready to be told!
Honestly, this two-door hardtop sedan is such an eye-catcher that it's really hard to say what grabs your attention first. It definitely embraces that vintage gasser look, raised high all the way around with a solid straight axle up front, although it's been keenly engineered to not be too bouncy. This wasn't some half-hearted project, but rather a labor of love, and although you don't see too many Mercury Gassers, this Comet is instantly recognizable with its original trim, bumpers, and lights still in place. It has a deep metallic green paint job with a lot of flake that pops in the sun and looks great, and although it's every bit of a driver-quality finish, the custom pinstripe work throughout elevates it to a level not often seen at the racetrack. Up front a gorgeous 'razor' grille between a set of colorful headlights sets the tone, further punctuated by the gigantic cowl hood up top, and the painted silver accents all over the body provide a wonderful contrasting backdrop to the hot-green finish. Every modification to this machine further emphasizes the competition-based theme, but they didn't go so overboard that the spirit of the original Comet design is lost. No, it's instead enhanced, leaving us to wonder if the '64 Merc was always born to be wild.
A quick survey of the inside reveals that the foundation of the interior is basically stock in appearance, albeit with some added hardware to account for the neck-snapping acceleration in this car's repertoire. The original-style tan bench is in great condition, and actually surprisingly comfortable compared to most racers, and offers lap belts for safety, although we might recommend installing harnesses to the roll cage that took place of the original ear bench. The door panels are stock materials that were painted bright silver, while the original dash was given a two-tone black-on-silver treatment that looks fairly clean as well. A small diameter steering 3-spoke wheel with a bright green glittering rim enables you to maintain a firm grip while banging down the track, and the B&M shifter in the floor manages quick shifts for the C4 automatic transmission below. You'll hit every gear every time, and just in case you forget where the gas pedal is, a bright red footprint pedal leads the way. Tucked under the dash, a three-gauge auxiliary instrument cluster monitors the vitals of the power train in concert with the original units, while atop the dash, a big, highly-visible tachometer keeps track of just how loud this beast will scream. For added safety and further room under the hood, the battery was relocated to the trunk, and if you're wondering what that cooler is doing back there, I can assure you it's not for a picnic. In fact, it's part of a rudimentary air conditioning system, although the jury is still out regarding its efficacy.
Now let's talk power! Obviously, there have been some great advancements under the big cowl hood, I can't imagine a Gasser can be called such without a thumper leading the way. Hit the starter on this bad boy and you'll hear a potent 289 small block Ford V8 roar to life, which has been built up just enough to handle the racetrack with pride while still having some street manners left over for the ride home. Despite the tall cowl, there's no huge blower protruding from the hood, or some gigantically displaced block underneath it, so the motor is in fact quite tame when compared to some of these virtually undriveable Gassers you see on race day. On the engine there's a big Holley 4-barrel atop an Edelbrock performance intake, and with the help of a full MSD ignition, an open element air cleaner, and steel-braided fuel lines, it fires to life with ease provides good horsepower up and down the throttle. The presentation is quite nice as well, with a brightly painted valve cover set-up, alternator, and air cleaner that really help the engine pop out from the satin black engine bay. Long-tube headers carry the exhaust out in a hurry to the straight pipes that exit at the profiles, and the incredibly aggressive note it emits can easily shake the neighbors awake in the morning. Thanks to an easy life spent in sunny Texas, everything is solid and clean underneath, with upgraded shocks and front disc brakes leading the presentation. Finishing the classic big-and-little look of this Gasser are a set of gold mag wheels wrapped in 155R14 Firestone blackwalls up front and a set of fat 26x9.50x14 Hoosier slicks in the rear.
This Mercury Comet Gasser is a fitting tribute to an era when racers lived by a simple mantra: run-what-you-brung-and-hope-you-brung-enough. Obviously, in this case, somebody brought plenty. Now you can too. Call today! 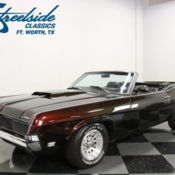 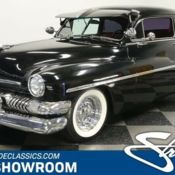 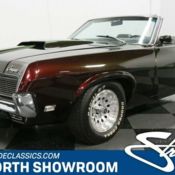 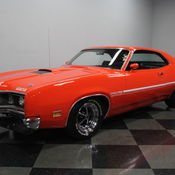 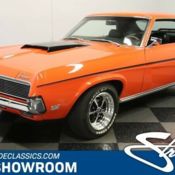 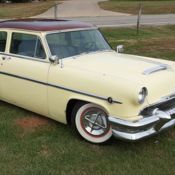 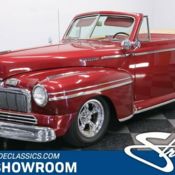 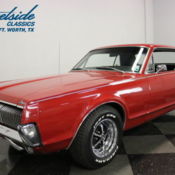 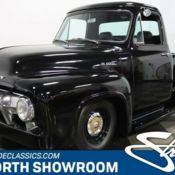 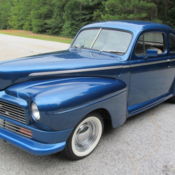