1987 Unimog FLU 419.Only 1694 original miles! If you donâ€™t know what a FLU-419 is, it is aspecial vehicle built for the military in a joint effort by Unimog, Mercedes,Freightliner and Case. There was only2400 of these built, so they are now increasing in value as a collectable. Being rare, you might wonder if parts weredifficult to find, but they arenâ€™t. Ifyou need parts for the front loader or backhoe, they are readily available fromCase. All the companies that built this arestill in business, and sell their parts.Unimog builds an incredible vehicle, known worldwide for their tractorlike work abilities, and ability to handle difficult terrain. They have been used by various militaries around the world for decades. The combinationof load carrying ability and excellent off-road capability has made theminvaluable. This one has a pintlehitch, and a towing capacity of 17,000 (made to tow a Howitzer!) They haveportal gear axles which give them excellent ground clearance and help keep thedifferentials up out of the way.These FLU-419â€™s were made to get to locations fast (can go up to 50mph), and clear runways, dig foxholes, make roads, etc. Hereâ€™s a good video showing the capabilitiesof the FLU-419 https://www.youtube.com/watch?v=Gqhu7PftRAk

Mercedes builds terrific diesel engines, and the onein mine starts easy, and runs great. Noleaks (rare for a diesel), but it only has 1694 miles on it! Freightliner is well known for their truckbuilding abilities, and Case is well known for their backhoes. The neat thing about the FLU-419 is thebackhoe folds up and lies across the back, out of the way. The backhoe is powerful. Itcan dig up to 14â€² deep with a reach of over 17â€², and it has a break out forceof 10,000 lbs! The front loader bucket israted at .75 cubic yards, the lift height is 98â€³. Itâ€™ll lift 3,300 lbs and the breakout forceis 6,000 lbs. It has an auxiliaryhydraulics attachment hose reel for runninghydraulic power tools like ajack hammer, rock drill and hydraulic chainsaw, etc. These were included with them originally, andstored in compartments on the right side.These tools are valuable by themselves ($500 - $1000 apiece). Many people have removed them before selling theirFLU-419s, but mine still has the drill and jack hammer tools on board. Ibought a hydraulic chainsaw for it too, that I might include if this bringsenough. Occasionally youâ€™ll see one ofthese FLU-419â€™s on eBay for cheap, but those typically have big problems. Mine is in great shape. The only reason Iâ€™m selling mine on eBay is (withcurrent virus concerns, and the number of people that would like to just comelook at it without buying) I donâ€™t want a bunch of people just dropping by - onlythe actual buyer.

The 4WD didnâ€™t engagewhen I first got it, but it was a simple pneumatic switch that went bad. I bought a new OEM one, and it all worksgreat now. The seats were showing somewear, so I had them professionally redone.There are switches on the rear (by the backhoe controls) that supposedlycan remote control the front bucket, and engine rpms, but I havenâ€™t even had achance to even figure out how/if they work.I have replaced odds and ends as I found them (like window moldings,etc) â€“ most just to keep it looking great. I had planned to keep this thing long term. It runs and operates great. Two of the hydraulic cylinders startedleaking, and I had them rebuilt. Theonly issue I know of now is one of the swing cylinders has just started leaking(used it pretty hard clearing some trees). Anything with hydraulic cylinders willeventually leak, and need service. Itâ€™sjust a part of owning hydraulic equipment. Iâ€™ve been told that these swing cylinders are easiestto rebuild on the machine (since the backhoe will lay down, allowing easy access),so Iâ€™ve just bought 2 rebuild kits (one for each side, though only one is leaking). The guy I bought it from bought newbatteries, new tires, and all new hoses on the front end.

Most good FLU-419s inthis condition, with tools, bring $25K to $30K (and the prices will increase asthey become more collectable). My pricereflects the fact one swing cylinder works fine, but leaks and needs repacking(I have the parts already â€“ just bought them).If I have to rebuild it myself, Iâ€™ll relist it with a price reflectingit. Local pickup only, but I will workwith your shipper. It does weigh a bitthough. Shipping weight is 16k pounds. It is built really solid! $500due within 24 hours of end of auction, and balance due at time of pickup. I do have this listed locally too, so Ireserve the right to end early. If youhave any questions, please feel free to ask.I really really hate to sell this, but I donâ€™t need it â€“ just want it. Iâ€™d planned on holding onto it because it isso cool, unique, and as an investment, but Iâ€™m having to thin out the toys abit. Hard to believe, but the wife saysI have too many toys! 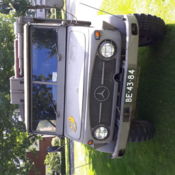 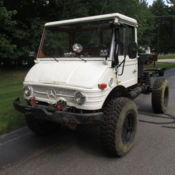 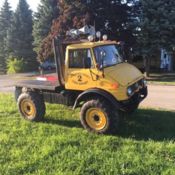 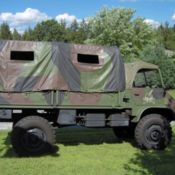 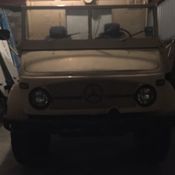 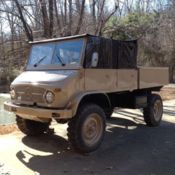 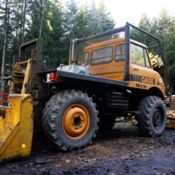 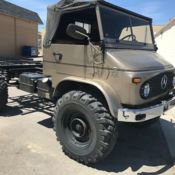 "Unimog go anywhere do anything beast" 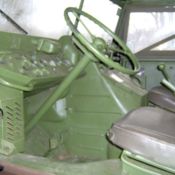 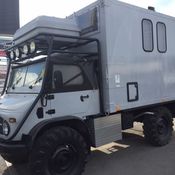