180 hp, 2,778 cc OHC six-cylinder engine with Bosch fuel-injection, four-speed automatic transmission, independent front suspension with coil springs and unequal A-arms, independent rear suspension with low-pivot swing axles, trailing arms and coil springs, and four-wheel hydraulic disc brakes. Wheelbase: 94.5 in. When Mercedes-Benz launched its new 230SL two-seater in 1963, it represented a huge improvement over the previous 190SL. A 150 horsepower, six-cylinder engine replaced the 190's four-cylinder, and it was gradually increased in size to the most desirable 180 horsepower 2.8-liter engine, as found in 1968's 280SL. The bulbous bodywork of the 190 was replaced by Paul Bracque's crisp, angular design, and its unusual, detachable, concave hardtop roof gave rise to the nickname "Pagoda Top." The elegant two-seater was never intended as a pure sports car, but Eugene Bohringer surprised observers by winning the rugged Spa-Sofia-Liege Rally in the 230SL's competition debut. The Sporting Motorist called it "the sort of debut one would expect from the Stuttgart factory." In eight years of production, Mercedes-Benz built 49,812 230/250/280SL examples. The 280SL was the most popular model, accounting for 23,885 units—almost half of the total. Mostly, however, the pagoda top SLs became the choice of celebrities and the wealthy, likely to be seen cruising sunny coastal roads and parked in front of trendy restaurants and grand hotels. The car on offer has been beautifully repainted, and chrome and bright-work redone, new interior and refinished interior wood trim. The hardtop was also restored as well. It is handsomely finished in the color combination of burgundy with a black canvas soft top and a palamino interior. This attractive roadster is also fitted with a floor mounted automatic transmission shift lever, the most desirable combination. This is a splendid example of Mercedes-Benz's last completely hand-made car. It awaits only an appreciative owner who would have bought it new in a heartbeat. 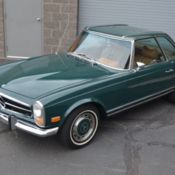 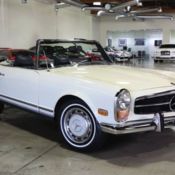 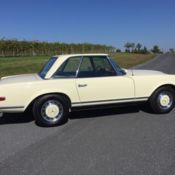 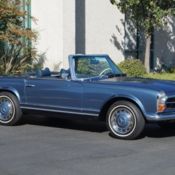 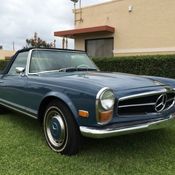 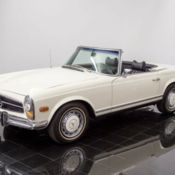 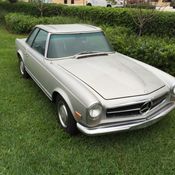 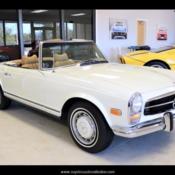 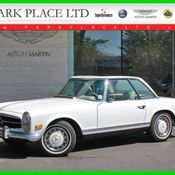 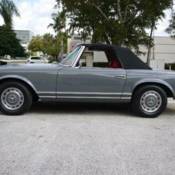