How about some all-terrain surefootedness combined with plenty of comfort that'll come in handy for more commonly encountered driving situations? This 1982 Jeep CJ7 Laredo has you covered on both accounts - it's equally at home on the asphalt as it is on paths less travelled, with fresh power and four-wheel drive agility just a flick of the lever away. It will arrive at its next destination with a clean AutoCheck in tow as proof that, despite the temptation it... presents for spirited driving, it's been ably navigated away from collisions during its lifetime. Jeep's CJ series cut its proverbial teeth on military usage and it only takes a quick glance at this CJ7 to see the aesthetic legacy of that service. While it's certainly rugged looking, it's also noticeably more refined than its predecessors and, with a wheelbase a full 10" longer than the previous iteration, the ride it offers is downright smooth for such a versatile vehicle. Its black exterior is in very good form - the paint has a strong shine to it and the gray Laredo lettering and the accents running above the rocker panels are nice and sharp. The bumpers both fore and aft are table straight and still have their shiny chrome finish, as do the step bars, chrome hood latches and mirrors. When the weather permits, Jeeps like this one are most often seen in their open-air configuration, but rest assured all the components are on hand to provide a more sheltered driving experience when needed, including both a removable hard top and a vinyl bikini top, as well as a pair of full-fledged metal doors. For those occasions when the call of rugged terrain can't be answered, there's plenty of comfort on board as well. The black ultra-leather interior provides a nice, opulent look, and the pair of buckets up front are well-contoured for support and have plenty of padding. The center console between them is in very strong condition and features a sturdy lockbox in which to stow away valuables. Air conditioning is often an after-thought in a vehicle as rugged as this, but it's on board and functioning at its best. Whether you're off-roading or navigating a more sedate route, you'll be well-covered as far as tunes are concerned - the Pioneer AM/FM/CD stereo also features an auxiliary port for additional sound sources and teams with a pair of Polk speakers inside to provide a quality audio experience. Lower the tailgate in back and you'll find some welcome storage space behind the rear bench seat. A totally rebuilt 258 cubic inch inline 6 Jasper engine was lowered into the engine bay only 16,000 miles ago, so this Jeep is well-positioned for future action. The powerplant is surrounded by clean components and fresh-looking hoses, fires up very promptly and runs nice and smoothly - after all, it's just now entering its prime - teaming with a 3-speed automatic transmission that's shifting in top form. Four-wheel drive surefootedness sits within easy reach of the driver and, with the ground clearance this CJ7 has, it's no mere novelty. The potential for off road fun is undeniable. Power steering makes for easy navigation, while power brakes that feature discs up front provide low-effort, fade-resistant stopping ability. This rugged ride surmounts obstacles on its set of very sharp 15" wheels wearing Cooper Dominator Sport A/T tires. Looking sharp and ready for action, this 1982 Jeep CJ7 Laredo has fun written all over it. Call today! 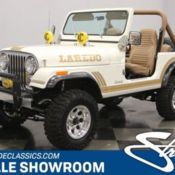 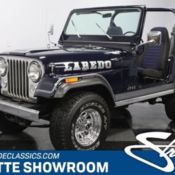 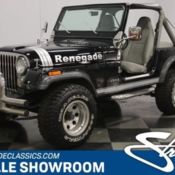 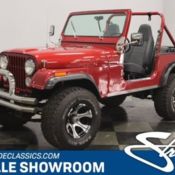 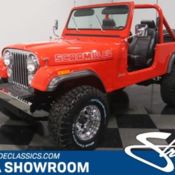 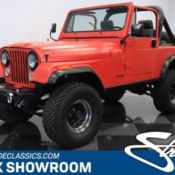 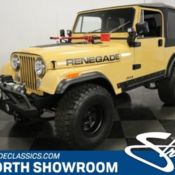 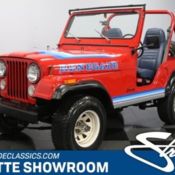 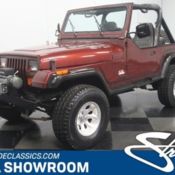 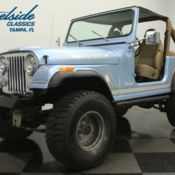