I hate looking at something without getting the full story, so here it is. I have a 2016 Jeep Wrangler and got nervous that it was too heavy for my RV on a big trip West. My neighbor had a 1993 YJ Wrangler in excellent condition so I purchased it and got it ready to Tow. I found out that my 2016 is usable and I just don't need two Jeeps. The good news is that my neighbor is a Florida Snowbird and this is a true Florida Jeep from Cortez Florida. It is a five speed four cylinder with 108,000 miles on it. It was so rust free that as soon as it got here (to Pennsylvania) he the entire interior floor pan and cargo area Rhino Coated and the entire chassis undercoated. Everyone though he was crazy but this things gonna last forever. They were shocked at the repair shop because the original paper production labels and bar codes were still readable on the frame. There is no rust ( one small thing explained later) and it is the original paint. Both my neighbor and myself are very picky vehicle owners. I have all of the service records, the manual, and even the original window sticker. Everything that it has ever needed, it has been done. It Starts, Drives, Runs, and stops like new. It starts right up, does not burn or drip oil and it tracks straight as an arrow down the road. It had never been through a Pennsylvania State Inspection. Our State is tough and I had no Idea what to expect. It needed Rear brakes, they were done, and that was it. There is a Badland 12,000 pound Winch on the front with a cable remote control. The winch has been used only once and it works great. It has been wired with a flat 4 in the front and also with the hookups for Roadmaster 9700 series Auxilliary brakes, although this wiring has never been tested. It is also wired with a flat 4 in the back to tow a trailer and has a hitch for a bike rack etc.. It has Power Steering, Brakes, and Air Conditioning. It has super heavy Weather Tech Floor-mats. The Soft top is in great shape with no tears or leaks. It also comes with The full all weather Trail cover which covers it tightly at night when you have the top off. This cover is like new only having been used twice. The front Hitch is U-Haul and my neighbor is a retired Boilermaker / Welder, so everything is over-done if anything. The Jeep is ready to hook up now and tow anywhere. There is a set of plug-in magnetic rear tail lights that come with it so that it can be towed by just about anything. Now,,,,here's the picky bad stuff. It developed a water leak around the windshield gasket. Which caused the frame to develop some rust from the inside out. ( Very common on this year)This was sealed and touched up but never replaced. The main gasket at the windshield hinge was replaced and things were examined. Nothing needs to be done and nothing leaks but if you were going to make things perfect, the local quote to replace the rusted part with paint and labor was $350. The part alone sells for $180 on Morris. There is a radio but it does not power up and there are no speakers. The drivers door lock does not operate with the key. It is missing a lock rod clip which broke. I could not find the clip anywhere online but if you do, it's a $5 fix. Take a look at the photo I took with the door panel off. Everything is that clean. All the other locks work as normal including the locking center console. Everything else including all guages light etc. work perfectly. I think that's it. I told you I had two Jeeps. Here's the funny thing. For reasons I just can't put my finger on, this one is more fun for me to drive than the new one. It certainly gets more attention because most of these after 25 years are in pretty bad shape. I'm sure I'm forgetting something so feel free to Email with any questions. I also have this listed locally and will have to cancel auction if it is purchased before any bids. Thanks for looking

ps,,,,FORGOT TO MENTION,,,,I have the rear (Fold and Tumble) factory seat and all of the hardware, seatbelts etc. It's all in excellent shape and will go with the Jeep. That Utility box that you see in the photo is just bolted in with two of the seat mounting bolts. no extra holes were drilled. That extra vehicle cover in the same photo easily stores in the box along with much more space for tools, safety gear, etc. 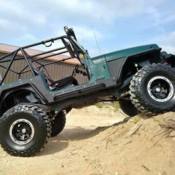 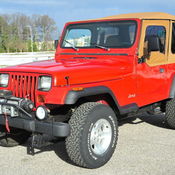 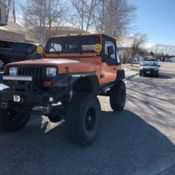 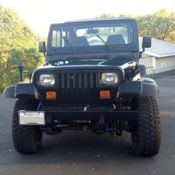 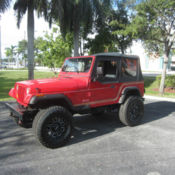 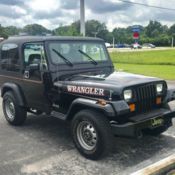 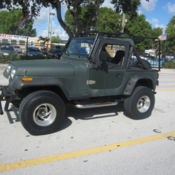 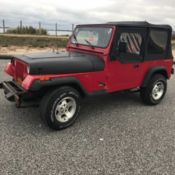 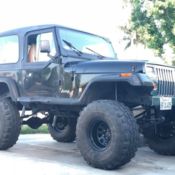 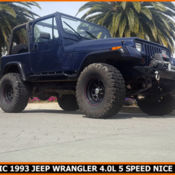