The collector car market is a funny thing, but when you sell as many cars as we do, you can often spot trends before they're really a trend. Such is the case with '80s trucks, particularly those from GM like this 1987 GMC Sierra Classic 1500. Nice ones are hard to find but when we do get one that's this clean, they never last long. That says there are a lot of you guys out there who just love these... trucks, and it's easy to understand why. Some will argue that this brilliant red GMC is simply too nice to be original, but as far as we can tell, that's original factory paint. It's been buffed and cleaned up, but since it's a one-owner truck, we're inclined to believe the guy when he says it's never been repainted. The deep shine is pretty darned nice (remember, this was the time when GM had a hard time making paint stick to bodywork) and with a modicum of care, it should look this good for years to come. It has obviously never been wrecked and comes from a warm climate, so the overall look is quite impressive indeed; original paint means no nasty surprises waiting underneath. It has been fitted with a stainless grille up front that gives it an updated look without erasing its identity, and there's nobody who doesn't love the look of a stepside bed. And like stepsides of old, it's fitted with a wood plank floor (yes, in 1987!), along with a set of shiny stainless bed rails to dress it up a bit. The handsome red interior features rather rare bucket seats, a center console, and yes, a Muncie 4-speed manual gearbox, which was added shortly after the truck was purchased. The seats have original cloth seat covers and the plush carpets are indicative of the upscale Sierra Classic, making it feel far more luxurious inside than you'd expect from a pickup. It's loaded with options, too, including A/C, cruise control, power windows and power locks, plus a tilt steering column, so it's hardly a sacrifice to drive this one every day. It's a great combination of factory and replacement parts, with gauges that are probably original but in very good condition (except the column-mounted tach; that's new), a very nice dash pad, and a newer Kenwood AM/FM/CD stereo head unit in the dash. Heck, even the clock works! They just don't get much nicer than this! Hard to go wrong with a fuel-injected 350 cubic inch V8, and in 1987 the pickups were actually packing usable power and torque. This one remains completely stock, so service and maintenance is easy and it remains a lot of fun to drive. Obviously someone has taken good care of it, as the engine bay is extremely clean and tidy, complete down to the factory air cleaner and intake hose. It starts easily and idles well, and with about 300 pounds of torque available, it feels punchy around town. A custom dual exhaust system adds a second catalytic converter, cut-outs with side exits AND rear exits, and glasspack-style mufflers for a great sound. The underside is quite original, so it's not as clean as the top side, but it's ready, willing, and able to go at a moment's notice. And for the bright red truck, the factory Rallys and 255/70/15 Cooper radials are the right choice. Just watch, this one will sell quickly, too. If you like the truck, don't hesitate because when they're this nice, they just don't sit around. Call today! 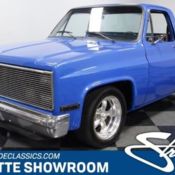 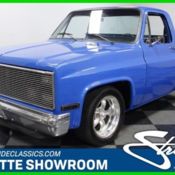 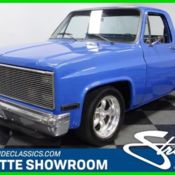