"Custom truck enthusiasts who are looking for a body-scraping stance know you don't get it by simply cutting some coil springs or clipping the front end of a pickup. The real way to lay metal to pavement is by using an airbag suspension, which is exactly what Mike King of Seymour, Indiana did when he decided to slam his '70 Chevy Blazer.

Having been raised on pro-street cars and street rods, Mike's upbringing gave him a passionate desire to construct unique vehicles. With his heart set on building a custom roadster that would be comfortable to drive and awesome to look at, he ended up purchasing the Blazer for a mere $400. No one could envision how mIke was going to turn a truck into a roadster, but after completely taking apart the body and frame, the transformation began.

Mike started by using 1/8-inch-thick, 2x4 box tubing from Art Morrison Chassis to create a new subframe for the Blazer, which included a Ford nine-inch rear outfitted with Moser axles and 3.50 gears. The rear uses a four-bar style suspension. KYB gas shocks and a set of Corvette 13-inch brake rotors to bring the large 17x10 American Racing wheels and 275-40/17 BFGoodrich tires to a halt. Up front, an Art Morrison Mustang II suspension was added that utilizes Corvette disc brakes and Mustang rack-and-pinion steering.

Instead of using springs at all four corners of the Blazer's suspension, Mike decided to use an Air Ride Technologies airbag system. The system replaces the springs with airbags that can raise or lower the ride height by a mere flip of a switch. A small air tank holds extra pressure in the system, while an electronic air pump keeps the pressure at maximum levels. The result is hydraulic-like suspension operation without the harsh ride, and the tank always has enough air to raise and lower the vehicle at any given time.

Once you get over the Blazer's ride height, you'll be drawn to its interior. The Tea's custom seats were upholstered in tan leather and accented with tan carpet, all of which was installed by Brian Barlow. The dash does not even resemble that of a factory pickup, as it came out of a '59 Chevy and features Auto Meter gauges along with Billet Specialties steering wheel and a polished ididit steering column. The stock stereo system was replaced by a custom Alpine unit that includes Boston Acoustic speakers hidden in the molded door panels and behind the seats. The head unit fits comfortably in the fabricated center console, which also houses the Air Ride air pressure gauge and switches.

If you look closely, you will notice that the console flows into the rear of the Blazer's tonneau cover, seperating the driver and passenger and creating the roadster effect Mike was trying to achieve. The bed cover was completely fabricated from steel and wraps around the seat backs before covering the bed and ending flush against the smoothed tailgate. The windshield was also cut two inches shorter and raked back to give the truck a more "swept-back" appearance.

Mike created his own taillights, making them flush with the body, and also spent many hours shaving the door handles and filling all of the holes in the factory sheetmetal to create an ultra-smooth finish. Once all of the bodywork was complete, Steve Allen of Bedford, Indiana sprayed the Blazer PPG King Red.

The engine compartment is as clean as the exterior, with a smoothed firewall and inner fender panels. The engine itself is a 400-cubic-inch small-block that uses a Clay Smith camshaft, Keith Black pistons, and factory heads with a 2.05 intake and 1.60 exhaust valves. A set of Street & Performance valve covers and pulleys birng some shine to the painted engine, while an Edelbrock Performnace intake and Holley 650 carburetor sit on top. An MSD ignition fires the small-block and a set of HPC-coated headers directs the exhaust through a set of Flowmaster mufflers. A 700-R4 automatic transmission located behind the engine uses TCI components and is operated with a Lokar shifter that pops through the center console.

Watching Mike cruise his Blazer down the street, you'd swear he was scraping the belly of his truck, hence the name "Lowbelly." Considering the current ride height of this Blazer, if it were any lower, Mike would be riding under it!"

-We offer free airport pickup. We can help facilitate low cost shipping to your door.

Call or Text Joel at 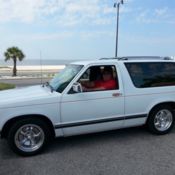 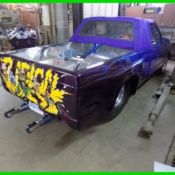 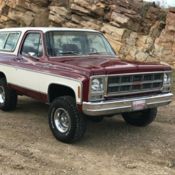 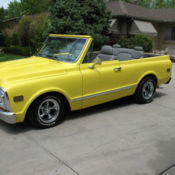 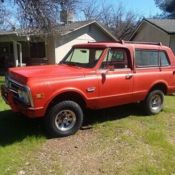 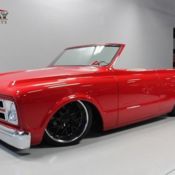 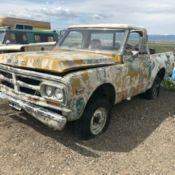 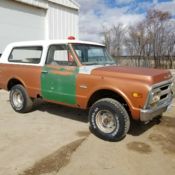 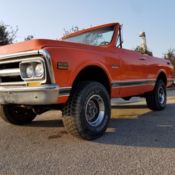 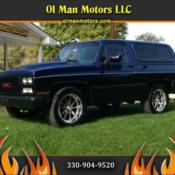