While you might think that the aging of the hobby means a simultaneous decline in the popularity of the Model T, ou'd be wrong. In fact, nterest in cars like this 1925 Ford Model T sedan seems to be increasing rapidly as younger enthusiasts discover the earnest mechanical simplicity of Henry's first love.In a field of much more common touring cars and open roadsters, his Model T 4-door sedan stands out. Well, f course it would because it's nearly seven feet tall, ut the enclosed body gives the simple T a much more formal and impressive look. It's easy to recognize, f course, nd the basic black was a hallmark of the Model T throughout its production, lthough it's a myth that Henry Ford says you could have "any color as long as it's black." Black was simply the fastest-drying color, hich allowed the assembly line to move at full speed, nd it's really the color that looks best on cars like this. Up close you'll find the paint has a soft period shine that's entirely appropriate and a single blue pinstripe surrounding the body adds some contrast. The brass era was over and chrome wouldn't be invented until 1929, o the Model T's trim is mostly painted black, lthough details like the headlight rings and door handles are nickel plated with a soft, atiny shine.Open one of the tall doors and you'll find a nicely appointed interior that belies the T's affordable price, oth then and now. Attractive gray broadcloth gives it a formal look and feel and even though it's a few years old now, t's holding up rather well. The story has it that this car was only driven to church on weekends, o it shouldn't be a surprise that there's so little wear. Simplicity was the key to the Model T's success, nd even in the (relatively) expensive sedan, he controls were basic: ignition switch and ammeter on the dash, fuel mixture knob that doubles as the choke, nd a fat wood-rimmed steering wheel that is quite directly connected to the front wheels. Set the spark and throttle just right, urn on the ignition, it the starter pedal, nd the jaunty little T motors off without working too hard. You'll have to practice your three-footed shuffle on the pedals, nd we'd recommend doing that before you put any friends in the rather spacious rear seat area.The eager little 177 cubic inch inline-four isn't a horsepower machine, ut it's about as reliable as an anvil and just as tough. Fabric-wrapped plug wires from the coil box add some contrast and the original updraft carburetor uses an accessory warm air intake to help atomize fuel. This is a later T so it also has a water pump and an electric starter with generator, o it's self-sufficient without requiring you to risk dislocating your shoulder cranking it by hand. The 2-speed planetary transmission is a breeze to operate once you get the hang of it and the brakes, ell, he brakes are terrible, ut that's the nature of the beast. The exhaust system makes all the right Model T sounds and it rides rather smoothly regardless of the condition of the pavement underneath the skinny tires and wood-spoke wheels.The Model T will always be a staple of the old car hobby, nd the 4-door sedan represents a great opportunity to get a fun old car for not a lot of money and still stand out in a crowd. Call today! 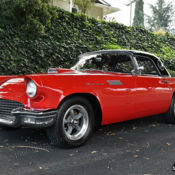 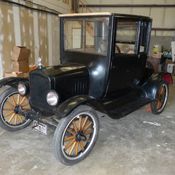 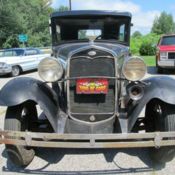 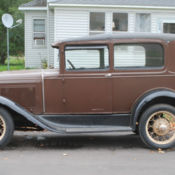 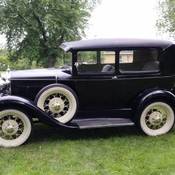 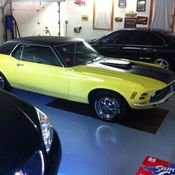 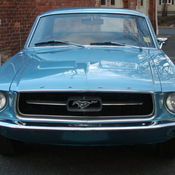 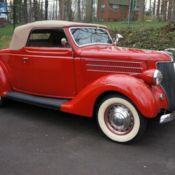 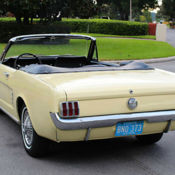 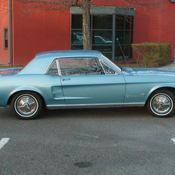