Cool resto-mod that keeps the early V8 feel but provides modern Chevy V8 power. Beautiful fresh Lebaron-Bonney interior. Runs great, looks awesome, drive anywhere!
Yes, thereâ€™s a Chevy V8 under the pointed hood of this Ford, but thatâ€™s kind of beside the point. Look at the graceful bodywork, a design that was as cutting-edge as any other mainstream vehicle this side of the Chrysler Airflow. Itâ€™s worth noting that for the most part, this â€™37 is pretty stock on the outside, with only a few subtle tweaks to give it a freshened look that doesnâ€™t eliminate any of the original designâ€™s most noteworthy features. The bodywork is very well done and while it was finished perhaps 20 years ago, itâ€™s holding up remarkably well thanks to great care over the intervening years. A few nicks and scratches are proof that this Ford was built for the road, but since it comes with a custom front-end bra for protection, itâ€™s in remarkably good shape. All four doors open and close with a very precise-sounding KER-CHUNK and you can see in the photos just how well everything lines upâ€”someone took their time getting this affordable Ford in top shape.
Inside, thereâ€™s a very correct Lebaron-Bonney interior that replicates the original tan broadcloth almost exactly. Patterns and materials are what Ford was using in 1937 and aside from a few gauges in the dash, youâ€™d never know that this was a modified car. Beautiful door panels incorporate the original chrome door hardware and the garnish moldings were painted to match the bodywork, a contrast that works quite well. The seats are plush yet firm, thanks to new stuffing under the fresh upholstery, and there are custom tan carpets on the floor that help control noise and heat. The three-spoke steering wheel is original, as are the two large gauge pods ahead of the driver. The speedometer and most of the original gauges are fully operational, although a pair of modern dials for water temperature and oil pressure were added, just in case. Thereâ€™s also an AM/FM/cassette stereo neatly tucked under the dash, discreetly enough that you may not notice it until you take a closer look. The trunk is surprisingly large and includes a full-sized spare tire plus a tool set tucked into one of the tool trays at the very rear. Youâ€™ll note thereâ€™s zero rust in there, which is common on these cars, suggesting that this green sedan comes from good base stock.
The engine is a mild 350 cubic inch Chevrolet V8 topped by a 2-barrel carburetor and designed to be smooth, reliable, and effortless. Itâ€™s a neat fit in the Fordâ€™s engine bay and surprisingly, it really doesnâ€™t change the carâ€™s character very much. Thereâ€™s a pleasant V8 burble but it doesnâ€™t sound like a hot rod, and with about three times the horsepower and torque of the original engine, it moves the sleek sedan with genuine vigor. Again, itâ€™s not a hot rod, just a bit more capable. A few chrome pieces dress up the engine bay and the wiring was completely new when the car was built, so itâ€™s ready for a long-distance cruise. Thereâ€™s also a big radiator, a modern 12-volt alternator, and cast iron exhaust manifolds to control heat and noise.
Keeping with the intent, the transmission is a Saginaw 3-speed manual, and the shift feel is very much like the original Ford unit. Obviously, the transmission upgrade precludes the use of the Ford torque tube drivetrain, so thereâ€™s a conventional driveshaft and a 10-bolt GM rear end with highway-friendly 3.55 gears inside, all hanging on a pair of leaf springs. Up front the stock suspension remains, including the transverse leaf spring, although the axle is a dropped unit that gives the car a bit of a rake, the only external clue that this isnâ€™t a stock Ford. Brakes are manual drums, the steering is light, and, well, it just feels like a V8 Ford is supposed to feel. Youâ€™ll note the floors are in excellent shape with no signs that this was ever a rusty car and everything has been painted to match the bodywork for a nicely finished look. Simple 15-inch steel wheels with hubcaps and trim rings are another OEM look and we love the staggered blackwall radials that tuck in neatly and ride very well.
This is an easy car to love. Itâ€™s reliable, smooth, and fun to drive, plus the great look will always garner a lot of attention. For those of you with a family, a 4-door hobby car is a slam dunk, and we can promise you just wonâ€™t find another one this pretty for less money anywhere. Ready to go, thatâ€™s this awesome little Fordâ€™s motto. Call today!
Harwood Motors always recommends and welcomes personal or professional inspections of any vehicle in our inventory prior to purchase. 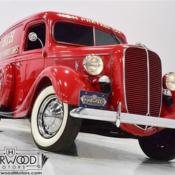 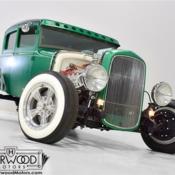 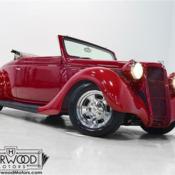 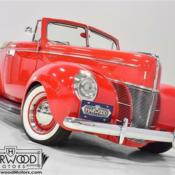 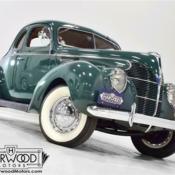 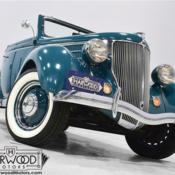 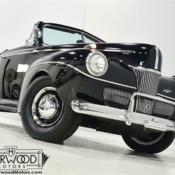 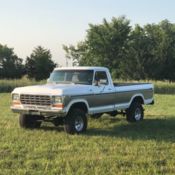 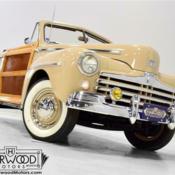 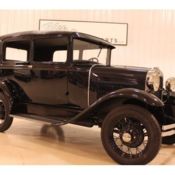