Here's a chance to own a really unique old survivor Model A.. I hate to use the clichÃ© "Barn Find," but I did pull this from a barn in Troutdale, Oregon, where it had sat since 1962. The owner during that era was a young guy in his 20's who had plans to turn this car into a hot rod. He pulled the engine out one day, closed the barn door that night, and sadly died in a plane crash just days later. The family never touched the car, it sat right where it had been left before the owner's untimely passing. For almost 60 years.
This little coupe had had an interesting life before it was acquired by the would-be hot rodder. And it still shows plenty of signs of the utilitarian farm life it had lived in it's "first life." There are a few period farm-fixes evident on the car, as well as the homemade gas-ration era wooden bed, which has a ton of character and is mostly intact. Someone painted "A-BOMB" on it some time a long, long time ago, undoubtedly a young kid with big plans of hot rodding his new toy.
Despite the patina, the car is actually pretty solid. The fenders are hammered, the body itself is not. The rear has been slightly altered to accept the wood bed, but they didn't hack it out terribly, the way a lot of the bed conversions were done on so many farms back then. It could be reversed easily. The roof opening has a metal insert screwed in place. The sub rails appear solid. Under seat pan pretty solid. The doors open and close as they should. A and B pillars are solid. Most of the usual areas that need patching on these cars are pretty solid on this one. A guy could patch the lower quarter in front of the wheel wells on both sides and the passenger side lower cowl if he wanted to, but they are not bad. Interior is sparse and tattered. Original seat with ragged upholstery included. Garnish moldings are there. Grille and driver's headlight are just sitting on the car for the photos. It's wearing 3 16" wire wheels and one odd-ball steel wheel with a small tire on the driver's side rear. It rolls somewhat reluctantly, the driver's rear wheel is stubborn but does roll and steer.
This would be such an awesome car to put a motor and transmission into and drive it just as it is. It has such a cool and honest presence to it. the patina could be minimized by washing it with a heavy detergent if you wanted to. The streaks of rust coloring streaming down for the pock marks in the paint rub off with elbow grease, so you could tone it down if you wanted.
This would also make a good candidate for a hot rod if you wanted. Ideally, someone will want it to preserve as it is, but it is also a nice enough body that it would be worth stripping and hot rodding if someone wanted.
There is no title. Location is near Portland, Oregon. 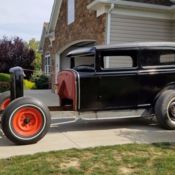 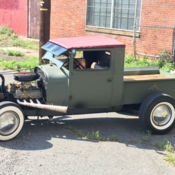 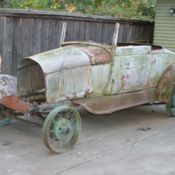 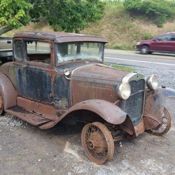 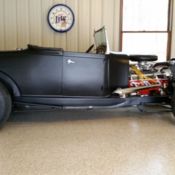 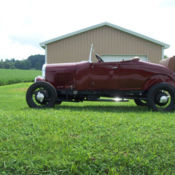 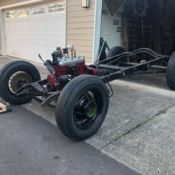 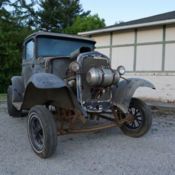 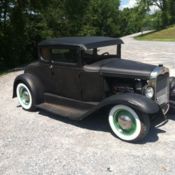 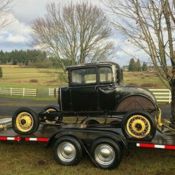