Here's a chance to get behind the wheel of a coveted first-generation Mustang at a very good price. This 1969 Ford Mustang is decked out in a great, period-appropriate color scheme and runs with the confidence-inspiring smoothness you'd want in a frequent driver that stands ready, willing and able to get you where you want to go while injecting some vintage mojo into your everyday routine.
With its Wimbledon white exterior ornamented by a broad swath of matte black across the scooped hood and a pair of reflective C-stripes providing extra flash along its sides, this Pony epitomizes late '60s style and carries a nice shine. It also represents an important chapter in the Mustang's evolution - in terms of size, it's a sort of a middle ground between the more compact models that came before it, and the markedly larger versions that would follow soon after. Take a look from up front and you'll see that the quad headlamps look great contrasted with the black grille sitting at the center. Take a lap around the car and you'll find that the glass remains nice and clear on all four sides and both bumpers are looking clean and show no obvious dings or corrosion. In spite of the 50 years of service this muscle car has seen, those bumpers also still sit impressively level, as does the body itself - in contrast to so many cars of the era that seem to be ambling down the road at an angle - and they're still another element that add to this Mustang's road-ready vibe.
A refurbished interior - with burgundy seating and door panels that look great against the black of the dash area and center console - awaits you inside. The seating looks especially sharp. Those high-backed buckets up front don't show any telltale creases on their bolsters and the bench seat in back looks to have seen very little use. The carpeting that runs underneath reflects the same condition - no heel marks or stains to be found. Ford went to a more futuristic, double cove dash configuration in '69 and the one here is a nice specimen of the updated design, with its group of oval-shaped gauges in the instrument cluster still readable, and a straight-looking, untorn dash pad sitting above. The optional center console adds a finished look to the interior, as well as offering some additional storage space. A retro-style AM/FM/cassette system sits in the center, just below a pair of vents signaling that this Mustang also comes equipped with air conditioning. The trunk area is nice and tidy, with clean fabric covering the floor and its full-size spare.
Raise the hood and you'll likely be impressed with the condition of the engine bay. From its walls to the components inside, everything appears stock, yet looks fresh and clean. The blue surfaces of the 302 cubic inch V8 carry a shine that's appropriate for such a strong-running engine, and the factory-correct decal on the air cleaner appears to have been recently applied. The Ford small block teams up with a 3-speed automatic C4 transmission and power steering to make driving this classic Mustang a low-effort proposition. Just in front of it, the radiator has been detailed along with the shock tower braces, entrusted with adding rigidity to the front end, so they are shiny and grime-free. 20 inch chrome Ridler wheels update the overall appearance and they wear 345/30 front and 295/30 rear Nitto performance radials. An air ride system in back allows for the perfect stance as well.
If you're itching to put a solid-running classic muscle car in your garage, you should check out this 1969 Ford Mustang. Call today! 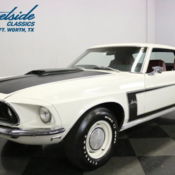 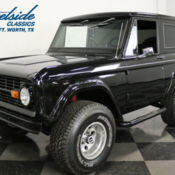 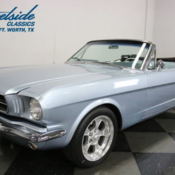 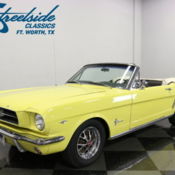 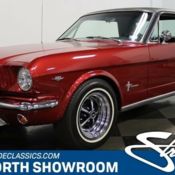 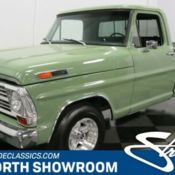 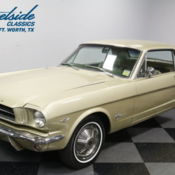 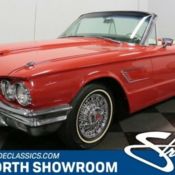 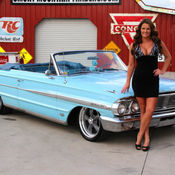 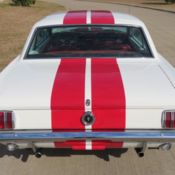