A top tier powerplant with torque aplenty anchors the drivetrain, while the outstanding craftsmanship on display both inside and out renders this 1934 Ford Cabriolet Rumble Seat a prohibitive favorite to vanquish competition on the car show circuit. You'll seldom come across a streetrod as impressive as this one - even in the best of streetrod company it will pull focus and it comes with both build receipts and photos to document its journey to greatness. ... Featuring a sturdy steel body well-positioned to stand up to the rigors of the road and the passage of time, this singular Ford's curb appeal is absolutely off the charts. It's draped in high impact black paint with a deep shine that absolutely radiates in the sunlight and a uniformly smooth texture. The dominant front grille will capture plenty of attention as this classic approaches and its ultra-clean chrome surface, matched by the rest of the exterior fittings, really pops against its black background. Like everything else on the car, the stance is totally dialed in, with a slight incline that pairs with the curvature of the front and rear fenders to make it appear that this Ford is coiled and about to strike. When a change in the weather calls for more protection while out on the road, the black convertible top is in great condition and seals well to keep the elements out. Given the unusually high standards displayed on the outside, you'd rightfully expect a showstopper of an interior to accompany it and you certainly won't be disappointed. The fully customized driving environment features a sharp red leather bench seat looming over an expanse of ultra-clean matching carpeting, with a pair of nicely detailed door panels to each side. In addition to the visual artistry inside the doors, there's also a surprising amount of room - this is a very comfortable ride in all respects. The aftermarket steering wheel sitting on a chrome tilting column provides a great feel, while just beyond it a collection of VDO gauges have been recessed into the billet instrument bezel. Raise the rear deck lid and you'll come face to face with an absolutely pristine jump seat, covered in well-crafted leather to match the interior up front. While in other cars the first to call "shotgun" is seen as the winner, the backseat becomes an undeniable place of distinction in this open-air stunner. An AM/FM/CD stereo with Bluetooth connectivity fills the cabin with sound via seamlessly installed speakers. Every exacting step was taken to ensure that the array of mechanical components featured on this one of a kind ride offers an uncompromising driving experience along with outstanding aesthetics. The Rousch 331 stroker packs museum-worthy visual impact and, equipped with Fast Fuel Injection for both adjustability and excellent all-weather performance, is one very eager powerplant. The engine exhales into a pair of ceramic coated headers to minimize backpressure and pairs with a 4-speed automatic transmission whose overdrive gear provides low revs at highway speeds - imagine the looks you'll get behind the wheel of this absolute gem. A Be Cool radiator and electric fan take their place at the front of the compartment to keep operating temperatures down, while an MSD ignition has also been added to maximize available spark. With its rack and pinion steering, tubular control arms up front and coilovers at both ends, this '34 offers a smooth, refined ride - not an attribute you'd normal associate with this niche. When it comes time to bring the set of American Racing wheels to a stop, power disc brakes in both front and back that feature polished Wilwood calipers get it done in a hurry. An exceptionally configured classic in all respects, this 1934 Ford Cabriolet Rumble Seat would be the crown jewel of any collector's garage. Call today! 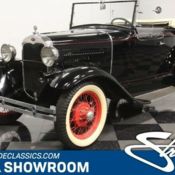 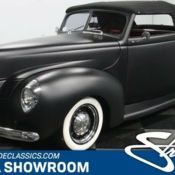 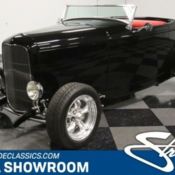 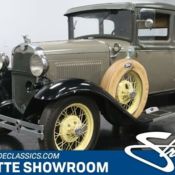 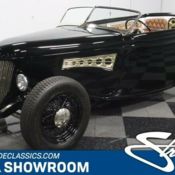 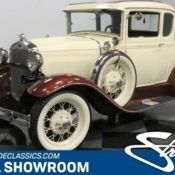 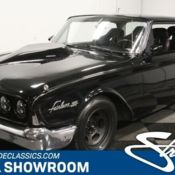 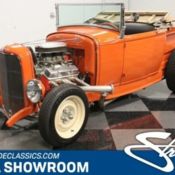 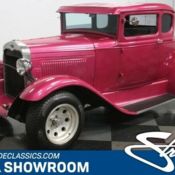 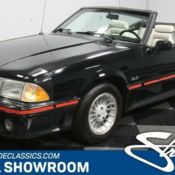