I have a 93 mustang 4cyl 5 speed coupe. Let me start off by saying that this is no showcar and that it has dents and scratches.It would make a great highschoolcar or a great v8 swap car.The car does not have any bondo at all. The only rust I know of is a little surface under the trunk mat. The car has a new paint job, t was painted the original base coat clear coat ford royal blue. I put new headlights and trim all around when I had it painted. I have tried to take as good of pictures I can showing the dents and trouble areas. The hood is the only part that I replaced on the car as the old one had rust issues, o it is black underneath.

The car just had and oil change, he front and rear brakes done, hanged the air filter, indshield wipers, nd I have a new fuel filter as well. I would recommend changing the clutch as it is weak, ut drivable I would replace it soon. The brakes are new but are a little hard so that will need to be addressed as well. The check engine light is on but I think that has something to do with the fact that at one point in the cars life it had a 5 speed swapped in it and they left the automatic computer in still. I have purchased a manual computer that will come with the purchase of the car. I also have a new brakeline for it as well because the rear one is a little soft. This car has some little bugs that will need to be worked out if you are looking to make it a daily driver. It smokes once in a while on first start, ut goes away after driving for a minute. The heater works, ut I do not know if the air conditioning does, s I have not tried it.

The paint on the car looks pretty nice.It has its fair share of parking lot dents. It has orange peel and a little bit of trash here and there. The rear trunk lid is one of the worst areas as it has some big dents I tried to get a good picture but its hard to tell, he passenger side door by the fender has some as well. The passenger side rocker has a big one as well. The hood has an outwards dent but isn't al that noticeable. The bumpers have some urethane scratches that weren't repared when it was painted.

The interior is in exceptional shape for its age and presents it self very well. the seatshave a few little stains but no rips. The passenger side has a little hole on the lower seat.The ashtray door is broken as most foxbodys are. It has an aftermarket radio installed. The power door lock feature doesn't work but can still be locked by manual locking. The front window has 2 ships but will still pass safety. The wheels are in good shape as well, he rear tires have about 4/32nds tread.

If you are looking for a great little car to drive around that needs a little tinkering, r that father son project highschool car this is the car for you. 500 dollar non refundable deposit after 24 hours by the end of the auction. Happy bidding and let me know if you have any questions. 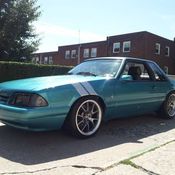 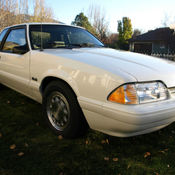 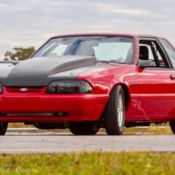 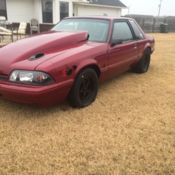 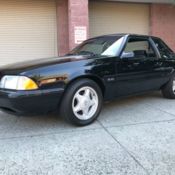 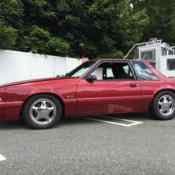 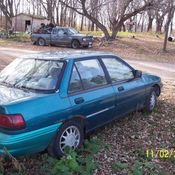 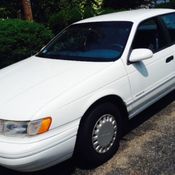 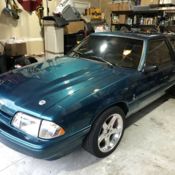 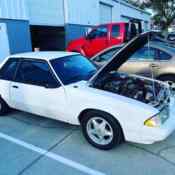