Meet Van Burgundy, a righteous 1973 Ford Econoline 200 conversion van ahead of its time. This was an original camper van sent to Ohio from the Ford factory in 1973 and the conversion was performed by Open Road Industries. Most conversion van are designed to haul people in comfort and convenience; Van Burgundy does all that plus it hauls ass, too! This fully restored van come from San Jose, California. Being sold on a California prior salvage title.

What we find particularly neat and useful with this van is that you can haul a small motorcycle or dirt bike inside the back. You simply fold both sides of the beds up and that gives you plenty of room to store a small motorcycle or dirt bike. There rear of the van has four corner tie downs for securing your motorcycle. We have placed our Honda 50cc moped inside to demonstrate some photos of use of the space but please note the moped is sold separately.

Professionally restored by Sundial Vans in Riverside, California, this Ford has new burgundy paint with a re-glazed white fiberglass top and it has new, sliding tinted windows. The paint with minor blemishes is in overall very good order and looks great with the black wheels.

The bodywork is straight and solid, the chrome bumpers look great and there are new weather stripping and seals on the doors. Van Burgundy rolls on General Grabber HTS tires, size 225/70R15 at all four corners. Each tire is mounted on black Pacer alloy wheels. A covered spare tire hangs out at the rear. The tires and wheels are in overall very good order.

Below and between the driver and front passenger seats is a crate V-8 bored and stroked to 347 CID by BluePrint Engines in Kearney, Nebraska and estimated motor value of $12,000 alone! It was dyno-tested at 430 horsepower and 440 pounds-feet of torque! It has the following aftermarket parts - aluminum heads and intake manifold; Holley 600 CFM carburetor; electric fan and fuel pump; Hooker headers and Magnaflow dual exhaust; chrome alternator. A new radiator, water pump, power steering pump were installed in 2014.

Backing this motor is a Ford C4 three-speed automatic transmission with auxiliary cooler and a 3.13:1 rear end. Convenience features include power steering and power brakes. Other upgrades include Moog progressive front springs and rear leaf springs built to one-ton specifications, newer heavy-duty shock absorbers in 2012, a newer steering gear and ram assist and a Scarebird front disc brake conversion by AAMCO, plus new drums and shoes.

Inside, is a relatively new, professionally done interior with four captain's chairs upholstered in two-tone Gray Mellow-hyde (similar to leather) with black carpeting and teakwood interior accents. The horn is currently inoperable. The seats are in overall very good order and they recline and swivel and each one has a three-point seat belt and armrests but there are blemishes visible on the driver's seat. The rear captain's seats are easily removable. In the rear is a four-inch thick foam bed that folds up and away for extra space such as a motorcycle with four corner tie towns to mount securely. The black carpet and black cloth continue in the cargo bed area.

The gray headliner is in similar very good orde,r as is the aftermarket three-spoke steering wheel with a thick wooden rim. The dashboard and inner door liners are in good overall shape and an Auto Meter tachometer hangs out near the steering column. The front center console has dual cupholders and plenty of pockets for small items.

The interior windows are framed in solid teak wood with curtains and stays. There is a six-speaker Pioneer AM/FM stereo with a CD player and a 400-watt amplifier. In the dash is a Pioneer DVD player and receiver with pop-out display for rear view camera. Van Burgundy has Bluetooth and USB plus there is a 12-inch DVD player that flips down from the ceiling and there are wireless headphones. All of the accessories run from an auxiliary deep-cycle battery with 55-amp hours of capacity.

As the result of a lengthy United Auto Workers strike in 1967, the launch of the second-generation Econoline van was delayed almost four months until January 1968. Instead of calling it a 1968 or 1968.5 model, Ford decided to call it the 1969 model. Shedding its Falcon roots, the second-generation Econoline became a heavier-duty vehicle, sharing many of its underpinnings with the F-series full-size pickups.

While the unibody construction of the previous-generation van was carried over, a major change was made in the overall layout in the body and chassis of the Econoline. To build a heavier-duty chassis, the mid-engine forward-control layout was abandoned in favor of a front-engine layout with the axle placed forward; this also allowed the use of the "Twin I-Beam" front suspension used in the F-series trucks. The redesign in the configuration resulted in major growth; the Econoline grew 15 inches in wheelbase; an 18-inch longer long-wheelbase model became the largest full-size van offered in North America at the time.

Documentation includes a Haynes manual, a binder of information and photos.

If a conversion van with a retro vibe is what you seek, then this is the van for you! Visit MotoeXotica Classic Cars soon to look this gem of a van over for yourself.

This truck is currently located at our facility in St. Louis, Missouri. Current mileage on the odometer shows 43,422 miles. It is sold as is, where is, salvage, mileage exempt California title. GET OUT AND DRIVE!!!

Or copy & paste link below into your browser:https://youtu.be/l_a6WQo484c 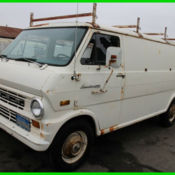 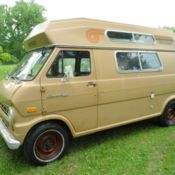 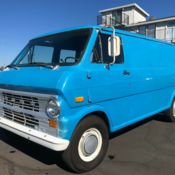 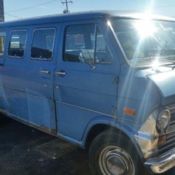 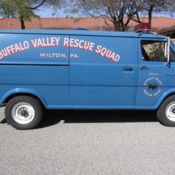 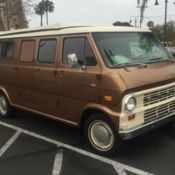 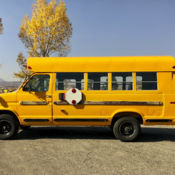 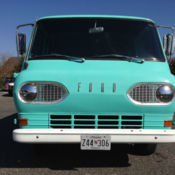 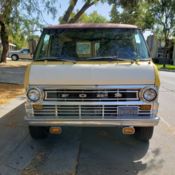 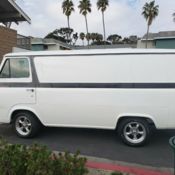