Why spend $50k or $60k on a new truck when awesome pickups like this 1977 Ford F-100 are still around and insanely affordable? Not quite a full-fledged collectable quite yet, it nonetheless remains a rugged, handsome truck in great colors that can still earn its keep around the homestead. While the other guys drive around in cookie-cutter pickups, you could have something interesting for a fraction of the price. Almost everything looks better with two-tone paint, including... working-class hardware like this Ranger. It's obviously had a good life, and as a lifelong southern truck, it shows no signs of rust or abuse underneath. The white-over-blue paint is newer than the truck, of course, and looks spectacular with a great gloss and no signs of botched bodywork underneath. Code S Midnight Blue Metallic is the truck's original color, so you don't have to worry about mismatched door jambs and underhood areas, because it's all equally well done. It's also not afraid to wear a lot of bright chrome trim, including the beefy bumpers, egg crate grille, and side trim that fits neatly into the groove running the length of the body. And we love the cab lights and bed-mounted spare for an industrial look. The 8-foot bed will carry a lot more than you'd expect, and with a recent spray-in bedliner, it's ready to work or play. If you do take to driving this Ford every day, the interior is a great place to do it. Freshly upholstered with a black seat cover that looks right in the vintage F-100, plus a heavy black rubber floor mat for low maintenance, it is ready to go immediately. Ford's familiar square gauges show crisp, bright markings, although they're only watching the basics of speed, temperature, and fuel level, which is why there are auxiliary dials tucked under the dash. A custom overhead switch panel on the headliner includes controls for the power windows and other controls, and a modern Pioneer AM/FM/CD stereo powers speakers built into the headliner itself. The three-spoke steering wheel feels suitably beefy for a big truck like this, and despite its blue collar origins, this is not a bad place to spend some time thanks to all the new components. The fresh and torquey 351 cubic inch V8 topped by an Edelbrock 4-barrel carburetor is the right combination of power and efficiency that you'd look for today. Both the engine and transmission were very recently rebuilt so the engine bay is nicely detailed and not too far from stock. Dress-up parts like the Edelbrock air cleaner and valve covers help with the performance look, and there's Ford Blue on the block. A fresh alternator provides plenty of juice if you're, say, towing a trailer or installing a camper top in the bed, and with power steering and brakes, it's easy to drive no matter the load. Ford's rugged "twin I-beam" suspension isn't the most precise setup ever devised, but it rides incredibly well for a big hauler. Out back, there's a 9-inch, which is equally rugged and according to the door tag, it carries 2.72 gears, which are great for highway cruising. The dual exhaust system offers modest mufflers so it's quiet out on the road, and while it's not detailed for show, the chassis is really clean. The 2-inch lift and slick black wheels (full spare mounted in the bed!) look awesome on the big Ford and use giant 265/60/18 Cooper radials to keep them off the ground. Clean old pickups like this still represent great value, and one that can double as a hobby vehicle on weekends while still working for a living is a bargain in anyone's book. And with an awesome look like this, we know this F-100 won't last long. Call today! 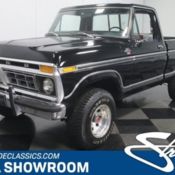 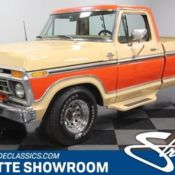 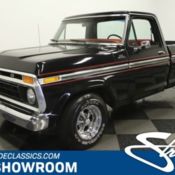 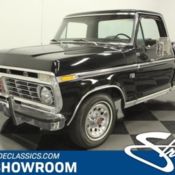 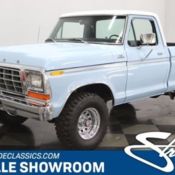 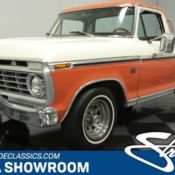 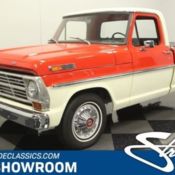 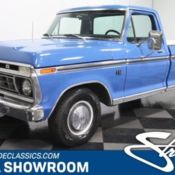 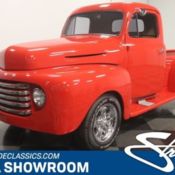 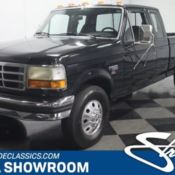