The original '65 GT 350s have become so valuable that the risk of actually driving them means that they usually sit in garages or museums. Tribute cars honor the originals and reduce the risk so that you can actually take them out and enjoy them. This one is a nicely built example that will attract lots of attention at cruise ins and is tons of fun to actually drive. Check it out. Instead of the much more commonly seen White or Blue, this car is presented in Rangoon Red with White Shelby GT 350 stripes, and it looks awesome. The view from the front of the car is intimidating with the hood scoop and set of hood pins there to make sure the hood stays locked down at speed. The grill has the galloping Pony in the center flanked by fog lights, is trimmed in chrome, and underlined by a pencil thin front bumper. The red paint catches the light as it runs down the side of the car and really shows off the lines of the fastback body style. A White GT 350 stripe runs along the rockers and a 289 badge along with a Mustang on red, white and blue stripes graces the front fender. Out back those iconic triple taillights have a Cobra gas cap between them and are underlined by a nice chrome bumper. Dual exhaust pipes have a healthy rumble as they exit out through the lower valence. Open the door and you will find a sharp looking black interior with a couple special treats. The door panel itself is super clean with a pleated center section trimmed in thin chrome piping. The first treat that you will probably notice is the deep dish three-spoke wooden steering wheel with the Cobra center. As you sit down in the comfortable bucket seat, take note of the Pony treatment on the seatbacks that adds such a nice touch. As you reach out and grab the wheel, the Rally Pak on the column becomes obvious putting the tachometer right in front of the driver where it belongs. The wood grained treatment on the dash is trimmed in thin chrome piping, and the other nice treat you will find is the white Hurst shifter for the 5-speed manual transmission in the center console that is just begging to be stirred around while burning up some backroads. Pop the hood (don't forget to release the hood pins first), and you will find a healthy 289 engine nestled down in a nicely detailed out engine bay. A chrome air topper has a 289 High Performance sticker on it and it sits on top of an Edelbrock 4-barrel carburetor along with an Edelbrock intake manifold. Aeroquip lines gets the fuel to the carb and Aluminum Ford Motorsport valve covers look sharp with the red ignition wires and blue cast iron block and heads. Doug's headers get the spent gasses out and downstream to dual Flowmaster mufflers and a Griffin aluminum radiator keeps things running cool. Power is sent back through that T-5 manual transmission mentioned earlier. An engine brace has been added for a bit more chassis rigidity, because this car was built to be driven. Longitudinal bars on the rear springs prevent wind up and wheel hop under acceleration and the rubber meets the road through BFGoodrich tires mounted on black and polished steel wheels. Come on down and check out this nicely done GT 350. It looks good, runs strong, and drives great. 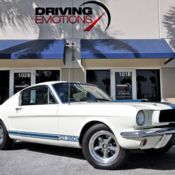 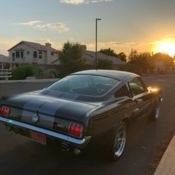 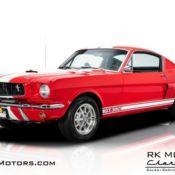 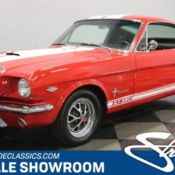 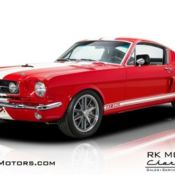 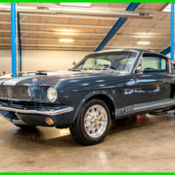 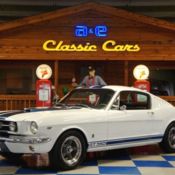 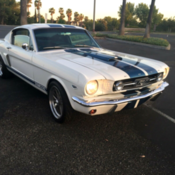 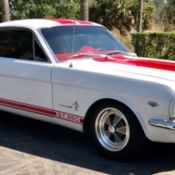 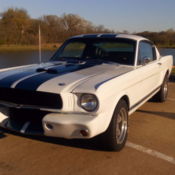