No need to adjust your monitor, there's nothing wrong; this 1969 Ford Mustang fastback really is that low. Professionally built to show standards, this Mustang is more than just radical, it's a runner! With a 428 Cobra Jet V8 up front, 4-wheel disc brakes, a 5-speed, and big wheels and tires, this is a pro-touring Mustang with a wild look that nobody will be able to duplicate. High-end customs like this rarely come to market, but if you want to stand out and get noticed, a pro build is a great way to do it. The roof was chopped two inches and sectioned three inches to give it that radically lowered profile, but it remains instantly identifiable as a Mustang. The astronomical amount of work required to build this car is visible everywhere you look, because without another Mustang next to it, it's hard to see where the modifications really took place. The fender flares still look right, the scoop in the quarter panel is intact, and while it looks even wider than stock, that part is just an illusion. Spectacular black paint is just the right choice to showcase the radical metalwork, and it's deep enough to prove that nobody was cutting corners on this build, because it's simply gorgeous. Red stripes are a riff on the Boss 302 and Mach 1 graphics, and all the factory stainless trim was trimmed, modified, and shaped to fit the altered windows. Out back there's a custom light bar for a taillight, the only part that doesn't quite look like it's from a Mustang. You could walk around this car for hours and not see all the tricks used to make it look like this. It's astounding. Don't worry, the interior is fully operational and comfortable enough for real-world use. The buckets are from a C3 Corvette, so they're the right size and shape for a low-slung car like this. The Mustang dash was subtly reworked and filled with beautiful Classic Instruments gauges in a carbon fiber panel and even the stock Mustang door panels were reworked to fit in the sectioned doors. Too cool! A 5-speed manual transmission has a cool carbon-fiber mini console and a pistol-grip knob and the three-spoke steering wheel is elegant. Full custom carpets, a powerful AM/FM/CD stereo system, cold A/C, and a few additional bits of carbon fiber make this a great place to hang out. It's strictly a 2-seater, with the former back seat area converted to a rather spacious storage shelf, while the trunk carries a spare tire assembly with matching cover. This Mustang remains 100% Ford thanks to a burly 428 Cobra Jet V8. It's tucked into the engine bay rather neatly, considering that they had three fewer inches of clearance under the hood. Wearing Ford Blue, it looks right, particularly with the oval air cleaner and finned valve covers for a vintage Ford performance feel. It isn't radical, but in this car, does it really need to be? It's reliable, powerful, and a lot of fun to drive thanks to the 5-speed manual gearbox and 4-wheel disc brakes. The front suspension is Mustang II with rack-and-pinion steering, so it feels modern, while the rear suspension is directly from a 2001 Mustang GT. It's amazing how smooth and composed this custom feels on the road. The custom exhaust system tucks up neatly to give it that pavement-hugging stance and it sits on 17-inch Coys alloy wheels that look giant only because of the radical body mods. Very few show cars drive as well as this one, and it looks spectacular. If you want to start winning the truly big trophies or just enjoy having the most radical car at any show you attend, this Mustang is the ticket. Call today! 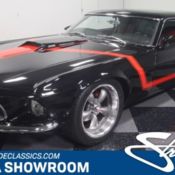 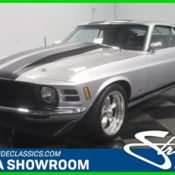 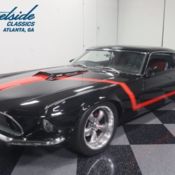 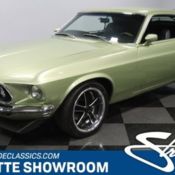 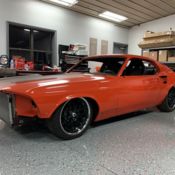 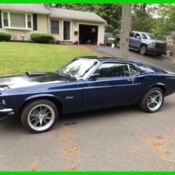 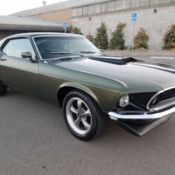 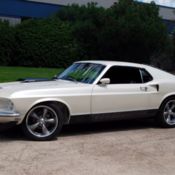 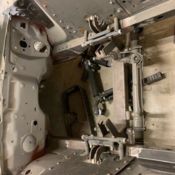 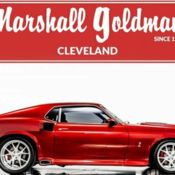