Sharply clad in a high impact color, this 1970 Ford Torino Cobra is an awesome rolling example of deluxe '70s automotive style. It packs original big block power under its hood and comes complete with a Marti Report as proof that this special muscle car left the factory with its upper-echelon Cobra features already on board. It's a great-looking, strong-running classic that's sure to attract attention on the road, and it's also well-suited to draw some serious accolades as a...Â worthy entrant on the local car show circuit. The Torino took center stage as a model unto itself the year this '70 debuted, and Ford commemorated the occasion by raising the model's style game significantly - veering away from the straighter lines of their full-size models and conferring a muscle car identity on it with its longer hood, shorter deck lid, and then giving it a lower and wider stance than any of its predecessors. Its sportsroof feature equips it with a gently sloping - almost fastback - rear roofline. The bright yellow paint on this deluxe Torino is a head turner, and as you get closer to this classic, you'll find it's in very solid condition, with nice even coloring and texture from front to back and nary a scratch on its contrasting flat black hood, where you'll find a fully functional scoop ready to usher cold, dense air to the top-tier powerplant waiting below. In back, metal louvres - a signature styling cue of the '70s - grace its sloping rear windshield. The black vinyl interior beyond the doors is another definite strong point - it's been thoroughly refurbished while keeping its original configuration intact. Open the door, climb inside and everything around you is in great condition. New looking seat covers in front and back sport knitted vinyl surfaces that show little wear, and the door panels they're bracketed by, as well as the expanse of carpeting running underneath, are in the same condition. The dash area is also looking sharp - there are no cracks in the dash pad above and a full complement of very readable original gauges sit in the instrument cluster. A Hurst shifter is within easy reach, beckoning you to put this powerful classic through its paces. Raise the deck lid and you'll find the trunk area to be in just the clean condition you'd expect after viewing the rest of the car, with signature Ford plaid fabric lining its floor and a full-sized spare and jack inside. The original matching numbers 429 cubic inch Cobra Jet V8 sitting front and center in this Torino's very clean engine compartment is in fine shape - starting promptly, running strong and sounding great as it sings into its Flowmaster mufflers. It looks sharp, as well, with silver valve covers contrasted by its Ford-blue block and air cleaner, and it's surrounded by a fresh-looking, deep black firewall and inner fenders. The Cobra Jet was a top-tier powerplant choice when it was introduced, and for good reason - equipped with its 4-barrel carb, it was conservatively rated at 370 horsepower and an impressive 450 lb-ft of torque when released -and with both a 4-speed, close ratio manual top loader transmission and 3.91 Traction Lok rear end sitting behind it, you can expect to be pushed back in your seat when you step on the accelerator. This great-looking, powerful vintage Ford cruises on a set of 14" stock Ford wheels outfitted with BF Goodrich T/A radials. With a numbers-matching drivetrain that's in great form, and benefitting from a thorough restoration that has left it looking awesome both inside and out, this 1970 Ford Torino Cobra is one impressive muscle car. Call today! 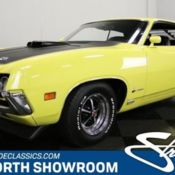 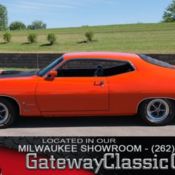 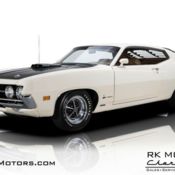 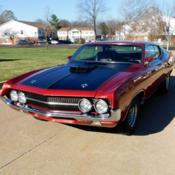 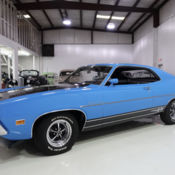 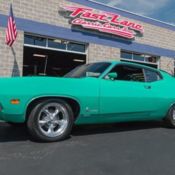 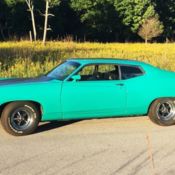 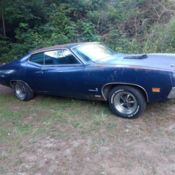 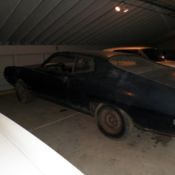