This 1967 Shelby GT500 fastback is a rather amazing find for those of us who love survivors. Placed into storage in 1970 when it was just three years old, it remained untouched until 2005 when it was fully rehabilitated, including a fresh engine rebuild. With original paint, original interior, and a dual-quad 428 Police Interceptor engine, this is an extraordinary discovery. Any Shelby will cause a stir at most car shows, but if you want to cause...Â a stir at a Shelby show, this GT500 is how you do it. With an unblemished history and fantastic patina that's seldom seen, this is a survivor in the purest sense of the word. That's original 1967-vintage Nightmist Blue paint on top of unmarked factory sheetmetal, and original paint means no nonsense hiding underneath. It is certainly not perfect but it would be a capital crime to even consider painting this car. It gives us a great window into the past so we can see exactly how these cars were built, the condition of the fiberglass back in the '60s, and all those other details that seem to get erased by time. It has spent its life in Alabama, so rust is a non-issue and the storage was clean, warm, and dry because even the chrome still shines up nicely. It's worth noting that this car also has all its original glass and lenses, factory emblems, and even the selling dealer's badge on the tail. This is as good as survivors get. Storage was equally kind to the interior, which features factory comfort-weave buckets, a beautiful Shelby wood steering wheel, and even original carpets. Yes, of course there's some fading but again, it's a wonderful glimpse into the past and a benchmark car for restorers looking to make tomorrow's show winners. And here's a hint: they were not perfect when they were new. It's great to see that there are no splits or tears in the upholstery, the gauges are bright with crystal clear lenses, and even the accessory Stewart-Warner dials under the dash look almost new. This Shelby is also equipped with factory A/C, which is still set up for R12 (the system was rebuilt in 2005 but needs a charge today). It does have the Shelby roll bar and shoulder harnesses, fold-down rear seat, and even the optional courtesy light package. The trunk is outfitted with the original mat and what is likely the original spare tire which is still in fantastic condition. When you stepped up to the GT500, you received the mighty 428 Police Interceptor V8, rated at 355 horsepower, although we've all pretty much realized that number is light by about 60 ponies. It's obviously the car's original engine, and it was fully rebuilt including new pistons, bearings, rings, valvetrain, and all the other little pieces so it's as good as new. With only 894 miles on the car since it was refurbished, the engine remains strong and ready to rock. They were careful not to erase originality under the hood, so it isn't shiny and perfect, but rather perfectly correct given the car's miraculous preservation. There are correct radiator hoses, the big Cobra air cleaner covers two rebuilt 4-barrel carburetors, and even the finned valve covers are those that were on it when it left the factory. The C4 3-speed automatic transmission shifts cleanly and spins the original 3.50 Traction-Lok 9-inch rear end. There's factory-applied red oxide primer on the solid floors, a reproduction exhaust system, and those lovely Kelsey-Hayes wheels with F60-15 Firestone Polyglas GT tires. Documentation is obviously extensive, including manuals, books, a Marti Report (showing this is one of only eight equipped this way), restoration receipts, and more. This is an incredible find and a benchmark Shelby that deserves to be in the most respected Shelby collections in the country. Call today! 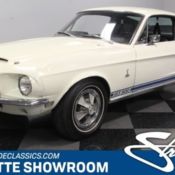 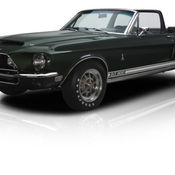 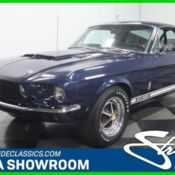 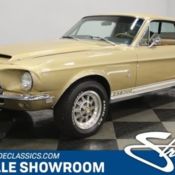 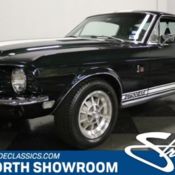 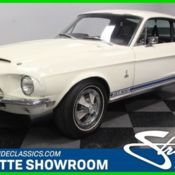 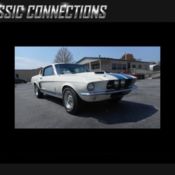 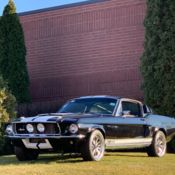 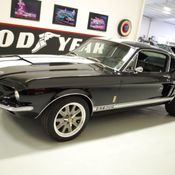 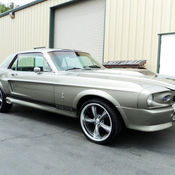