What could be more fun than a clean 1968 Ford Mustang coupe with a classic red paint job and a sweet-running 289 under the hood? Nicely finished and clean from top to bottom, this Mustang has been built as an all-around performer that you can be proud to show at the local cruise nights.
There really isn't much you can do to an early Mustang to improve its looks, so the fellow who built this one focused on getting it straight instead. The sheetmetal appears to be all original, with none of the usual tell-tale signs in the quarters, so you know this was never a wreck. Two-stage urethane creates the shine, and the paint is exactly right for a Mustang: bright and cheerful with a hint of aggression. It also works really well with the slightly more formal coupe body, and the white C-stripe works best on the '67-68 models. A Mach I style hood scoop was installed and painted to match the bodywork, while the original grille has been upgraded with a set of GT fog lamps. Chrome bumpers have been retained front and rear, as well as all the original Mustang emblems.
The car's black interior looks ready to cruise, thanks to a set of factory bucket seats. Wearing nice reproduction seat covers, it has a very correct look and remains comfortable enough to drive every day. The floor is covered with original-style carpet, and the door panels are accurate reproductions that lend an upscale feel to the interior. A fat wooden steering wheel takes the place of the skinny original piece, and there's a white-faced tach attached to the steering column. Factory gauges remain in place as well, and even though they're a little faded, they work properly. Entertainment is compliments of a modern AM/FM/CD stereo system that has been nestled into the original radio's spot in the dash and drives new speakers located on the rear package shelf. You also get a nicely-dressed trunk with a correct mat and full-sized spare tire with matching cover.
As I mentioned, power comes from a 289 cubic inch V8 that has been augmented with parts like an Edelbrock intake and 4-barrel carburetor, new ignition system, and a set of long-tube headers. It was originally a C-code 2-barrel engine, so it's a real V8 car, and the extra power will always be welcome. The engine bay isn't showy or detailed, although it's clean with satin black inner fenders and Ford Blue on the block itself. Edelbrock contributed a set of cast aluminum rocker covers and a matching air cleaner, creating a clean, simple look that works well with the car's personality. Those long-tube headers feed a FLowmaster dual exhaust system, and the 3-speed automatic transmission snaps through the gears without hesitation. Check out how clean the floors are, wearing just a hint of red overspray, just like it should be. Wheels are late-model pieces that resemble vintage Torque Thrusts and carry big 17-inch Firestone rubber.
Great Mustangs are still out there, and many of them are still very reasonably priced. This one has already had a lot of attention and effort lavished upon it, and it shows. With a high-impact paint job, that handsome interior, and a great-running small block under the hood, it's the kind of fun car that populates most local shows and cruise nights. Give us a call today! 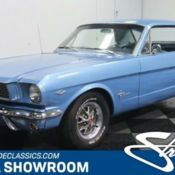 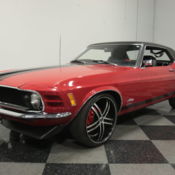 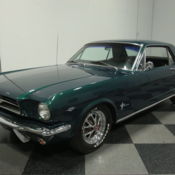 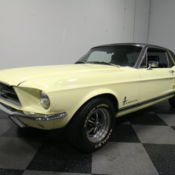 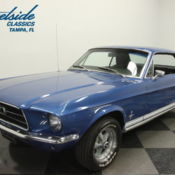 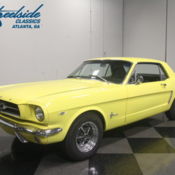 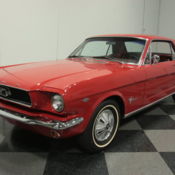 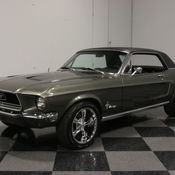 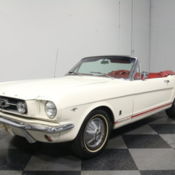 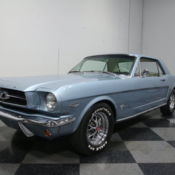