The Mach 1 was introduced for the 1969 model year and became a big success. Standard power train equipment was the 351 Cubic inch V8 that put out nearly 250 HP with the top of the line option being the functioning Ram-Air 428 Cubic Inch 7.0 Liter Super Cobra Jet option producing an estimated 340 HP as this car is equipped. Also equipped with a "R" Code traction lock and a 4-speed manual. This Mustang is on consignment and comes out of a 20 year ownership with nearly 15 of those years spent on... a meticulous restoration. The car was pulled out of orange grove in Florida back in 1999 and was told that the car had been there all of 20 years. At the time the odometer showed 4000 miles and which is believed to be accurate mileage based on the information given as the car had been sitting since at least 1979. When the current owner picked up the car it was in-tact however in disrepair with a lot of the car being in boxes in the interior and trunk. During the restoration process they tried to use as much of the factory parts that were included however some were just not useable like the clutch for instance that proved to be a lot harder to find than first thought. One was finally found in Cleveland OH. This is also a Radio-Delete R-Code which the Marti report shows only one being built....This one. At this time the owner was unable to locate the radio delete plastic panel and opted to outfit the car with a original AM-8 Track that does work. Body work was done by Jim Witt of Roscommon MI and the engine was completely rebuilt by Meyer Performance Engines using proper 428 SCJ specs. Although not sitting on the original wheels the stock wheels are included in the sale. As of recent Hammer and Dolly automotive restoration completed a re-fresh of the car including brakes and suspension and other odds and ends to make sure that this is a turn key automobile. This is a numbers matching Indian Fire Red R-Code that is an important piece of competition cars that could be purchased off the show room floor. The original Marti report window sticker and recent service are all included. 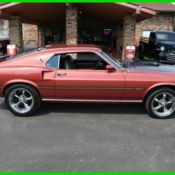 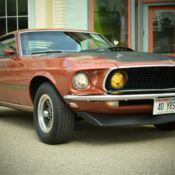 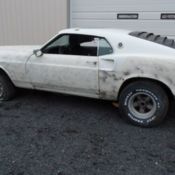 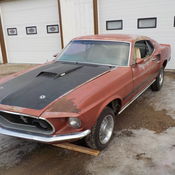 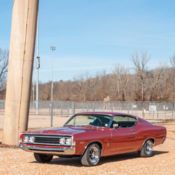 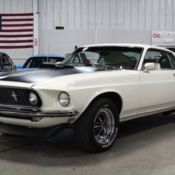 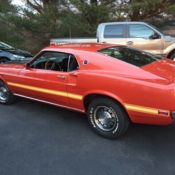 1969 Indian Fire Mach One for sale 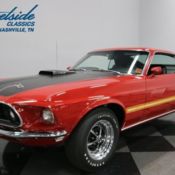 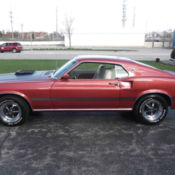 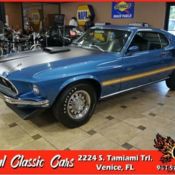