This 1932 Ford Vicky is a highly stylized tribute to the original, combining the stance and performance attitude of a traditional hi-boy with 21st century tech the create one of the most innovative rods we've ever seen. Beautifully finished with tens of thousands of dollars in recent work, it's the car you drive if you want to be the center of attention everywhere you go.The two-tone paint combination accentuates the radically altered 2-door victoria body style, which is itself a modified Rat's Glass tub. If you squint just right, you can still see the faint hint of the favorite '32 Ford bodywork in there somewhere, from the traditional grille up front to the handsome beltline and wheel arch moldings that define the car's lower edges. The top half is painted Mercedes-Benz silver and the lower areas are fire engine red, making for a high-impact look that also seems sleek and sophisticated. You'll also note a bright orange stripe around the perimeter and no, it's not nearly as garish as you'd think. Finish quality is outstanding, as you'd expect, and the ultra-smooth look extends to every single part, including the gently curved windshield, the flush-mounted LED taillight strip in back, and the profile-hugging top that gives it such a radical wedge-shaped look. HID headlights, lots of exposed chrome suspension bits, and those delicate little side mirrors all add up to a car that recalls the past but is looking squarely into the future.The four-place interior is spectacular, with custom-made buckets at the corners, all wrapped in bright red leather. Just about everything inside this car was custom made, from the sleek center console to the intricate door panels, and even the cool two-tone steering wheel. A simple gauge panel with simple instruments has the right look and they were careful to use red and silver in such a way as to balance everything out inside. Suicide-style doors open with a hand-held remote or hidden buttons and it's so fresh that there's still protective wrapping on the carpets themselves. Even the steering column and bracket are a beautifully formed piece of sculpture that turns a functional piece into a focal point. There's a hidden iPod stereo system, custom switches in the console for the power windows, and the neatest little shifter we've ever seen. The back seat area is first class all the way, with plenty of room, and an interface for your iPod, which is stowed behind the left rear seat.Somehow, some way, they managed to stuff a 468 cubic inch Chevy V8 under the pointed hood, a truly remarkable feat of engineering. Everything on the engine, from the Demon carburetor up top to the valve covers to the water pump has been chrome plated or polished, and the block itself was painted to match the red lower body. It features aluminum heads to build horsepower and shave weight, and an aluminum radiator up front uses an electric fan to stay cool. It's backed by a built TH350 3-speed automatic transmission and a very trick Winters quick-change rear end that uses a Jaguar independent suspension and inboard disc brakes. Up front you get tubular A-arms, coil-overs, and disc brakes, and the exhaust is custom made using glasspack-style mufflers and a ceramic coating to make it shine. Deeply staggered Boyd Coddington wheels give it just the right look and carry low-profile performance radials.Every bit the show car it appears to be, this incredible '32 Ford is gorgeous to look at, a blast to drive, and even at this price, impossible to duplicate. Call today! 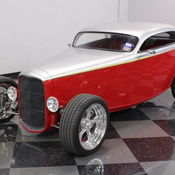 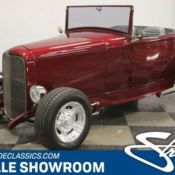 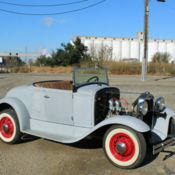 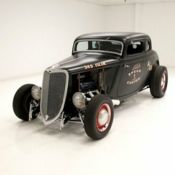 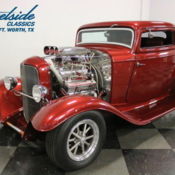 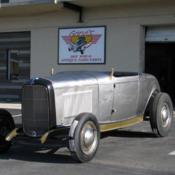 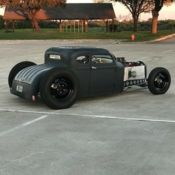 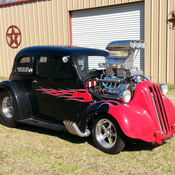 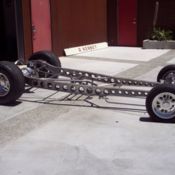 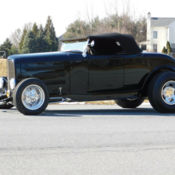