MotoeXotica is excited to offer this rare and attractive vehicle, a 1935 Ford Model 48 Deluxe Convertible Sedan, one of 4,234 copies made in 1935 from Orange, California. Originally purchased in the City by the Bay, San Francisco, California, this blue oval product spent most of its life with one family. It is handsomely presented in Cordoba Tan with a matching convertible top, red pinstripes and red painted wire wheels with chrome trim rings and center caps nestled within Universal 6.00-16 whitewall tires.

The Model 48 debuted in 1935, an update to the previous V-8-powered Model 40A. Nineteen thirty-five also marked the debut of Ford’s “convertible sedan,” which combined the best features of a closed body, a cabriolet and a four-door sedan into a single design.

Outside, the car’s brightwork is a mix of new and old. The grille shows some patina while the front and rear bumpers have been re-plated relatively recently. The car’s paint looks fantastic overall but shows some minor blemishes. Other exterior features are dual-mounted horns and fog lights, a rear-mounted spare tire within a hard case and a trunk rack with a new trunk featuring a blue interior. Car comes with vintage California black plates.

Inside, there is high-quality leather upholstery, wood accents, a factory AM radio, which replaced the standard ashtray, driver’s only vacuum-actuated windshield wiper, an optional oil gauge and the original “banjo” steering wheel. However, the fuel and engine temperature gauges are inoperable. The interior is so comfortable, you will feel like you’re in your living room!

In 1935, as Ford weathered the deepening economic depression, it tempted and encouraged those few families in America who could afford to buy a new car with the slogan, “Greater Beauty, Greater Comfort, and Greater Safety.”

Phil Wright, a Briggs designer whose resume included work with the Pierce Silver Arrow, aided in providing some of the attractive new styling for the 1935 Fords. On the outside, contemporary styling touches such a more sharply raked windshield, a narrower grille pushed forward and made more prominent by beginning front fender integration, which de-emphasized the fenders in relation to the grille. In back, there were new, twin taillights. Ford offered 10 body styles in Deluxe trim, including this convertible sedan (Code 740) and ‘Tudor’ and ‘Fordor’ models with a new built-in touring trunk.

The transverse leaf spring suspension remained but up front but the front spring moved ahead of the axle to provide more cabin room on its 112-inch wheelbase. In addition, ’35 Fords featured lower bodies and new passenger comfort was enhanced by “Centerpoise Ride”, which placed the rear seat just forward of the rear axle, reducing the effects of bouncing on rough roads.

Meanwhile, safety features included twin horns and taillights on DeLuxe models and both Standard and DeLuxe cars incorporated parking lamps placed within the painted headlights, eliminating the need for cowl lamps. Ford’s combination of price, practicality and looks combined to help it sell 820,000 units, taking the sales lead from Chevrolet for the first time since 1930.

Additional options on all ’35 Fords included – radio, heater, clock, cigar lighter, whitewall tires and a Greyhound radiator ornament. A fine representative of a rare and attractive body style, this vehicle will make a unique addition to any vintage car collection. GET OUT AND DRIVE!!!

Current mileage on the odometer shows 99,945 miles. It is sold as is and on a clear and actual mileage California title. 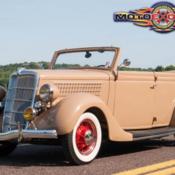 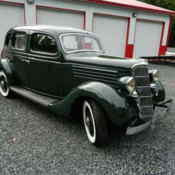 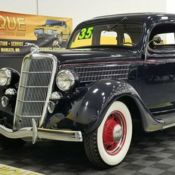 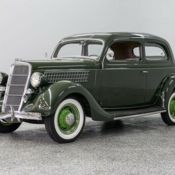 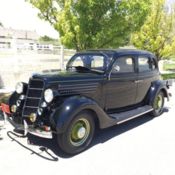 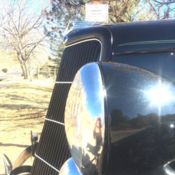 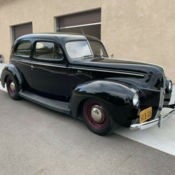 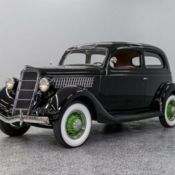 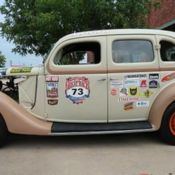 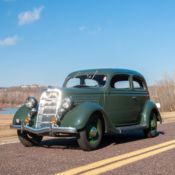