I am selling a real 70 Challenger RT that a really good friend of mine had owned for 30+ years. He restored the car to a street car even though he had only driven it on the street less then 200 miles in 15+ years after the car was redone, he is 64 years old. He would pull it out of his garage and take it around the block a few times and put it away. I think he built it faster then he was expecting and after owning it for 30+ years sold it to another friend of mine over a year ago. Fast forward to now, my friend and his family have decided to sell this car and a few other cars in the next few weeks to buy a vacation home. This car looks amazing, the paint and body are super nice, I would say 9+ out of 10. The car is rock solid and paint was done correct plum crazy. The interior is super nice with no rips and no cracks on the dash pad.. This car was a original B-5 blue, 383 - 4speed RT with factory ac. The owners do not have the original drivetrain, that's why it was restored the way it sits today. The only thing that shows any signs of the blue were the trunk hinges which can easily be painted purple. Alot of money went into this car, everything has been rebuilt, 440 Motor with estimated over 600+ horsepower, automatic trans with Ati torque converter and a 4.30 - 8.75 rear all redone. I only seen 1 chip in the back rear 1/4 less then a pinky nail ..That's it, super solid car, super straight car and will run 10.40 or better if you know how to drive. The car has been to the track for 2 runs and ran a 10.40's ..Indy roller motor, the drivetrain alone would cost you close to $20000.. If you want a awesome fun mopar street car this is it. The bumpers were painted to match the car, again everything was touched on this car when it was done..
I personally would love to own this car, if I owned it I would change the bumpers to chrome, and change the intake manifold and add a Shaker hood on this Challenger ( owner has a original RT hood that comes with the sale ) and it would totally change the look of this Beautiful RT Challenger. Someone will be getting a awesome car.. The exhaust dumps under the rear as you can see in the pictures. It is a great street car for sure.. car does have a fuel cell.. all seat belts..no roll bar.. street car.. Buy it now can be added for serious offer's.. Car is for sale local and can pull ad off at anytime.. Good luck selling as is like any 50 year old car..On Oct-06-20 at 12:28:04 PDT, seller added the following information:On Oct-06-20 at 12:36:25 PDT, seller added the following information:

The car was a little dusty in a few pictures.. You can see the 1st 2 pictures with out the dust.. Car has been garaged for over 30+ years.. 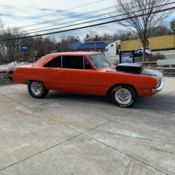 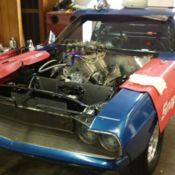 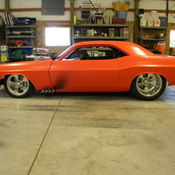 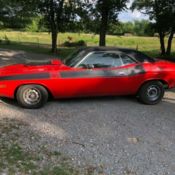 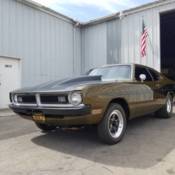 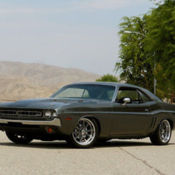 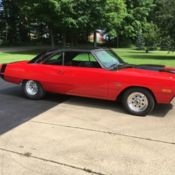 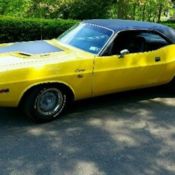 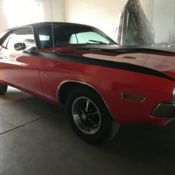 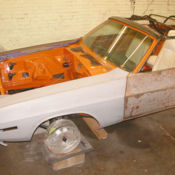