Price lowered 5-5.. You do not see these demons every day.. I am only selling for a friend who is buying another vehicle, so something has to go. The car is a original 340 Demon that has 2 fender tags of options and a original 1 year only Curious yellow, rare color offered only in 1971 as a high impact color GY3 color Demon with a black vinyl roof. The Demon had a new crate engine in it in early 2017, a 408 Storker motor that has 465 horsepower. The motor had some fine tuning from a local mopar expert and if probably closer to 485 to 495. The engine has less then a 1000 miles of street driven, local cruising and a few 100 mile trips. The transmission also has less then 1000 miles, 727 I was told numbers matching trans but never looked, 3000 stall speed converter, 3.91 factory 8.75 rear end. The exhaust is a 3 inch TTI, and is the best looking exhaust I have seen on a Mopar. I know the history of this car from back in 1989 when a buddy came across it for sale.
My buddy bought it in 1989 when it was painted, new bumpers, and interior and kept it till 1995 when he sold it to a local guy. In 1996 I purchased this car and did a few things, like added a tach in the middle cluster that still works today. I sold the car in 1999 to another buddy, and it switched hands in a few States since then. The car is still wearing the same paint and interior from 1989, Paint still looks very nice but has a few flaws that I point out, hood a little faded, The floors are super solid and nice, along with the trunk and look like no panels were replaced.
The original vinyl top has a few bubbles under it, nothing major and nothing I would be concerned about, as they were there in 1996. The car has new 15 inch rallys, 15x7 front and 15x8 rears with tires less then 500 miles on them. All glass is good, no issues, the car has front disc brakes, 4 inch bolt pattern, 1 rear lug is busted.. The rear 1/4's have some bubbling that he was going to have repaired but never did, driver side more then the passenger, no rust on doors, fenders, floors, rockers are all straight and solid.. Car is much nicer then these pictures show.. This is a solid car that shows very well with a lot of factory options ( some missing now ).. This is for sale locally and he is going to sell it or another car to buy a car by next Friday. Car runs and sounds great, all gauges work, all lights work, radio sounds great, just a great Demon << MIGHT CONSIDER SELLING LESS MOTOR AND EXHAUST>>>
I would not paint the car, I would have 1/4's fixed and blended in, leave the top as it is 98% great, I have the rear seat belts that were never put back in since 89, this is a real scat pack demon with factory scoops and spoiler, just a great car. Drive any where .. I have pictures of car on my phone if you need more or a video of it running.. 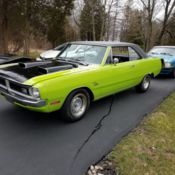 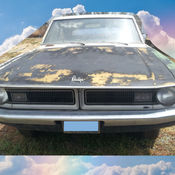 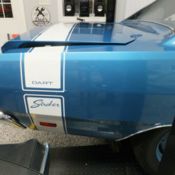 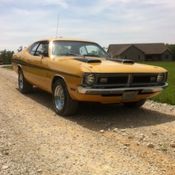 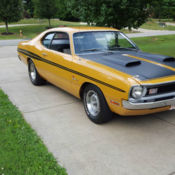 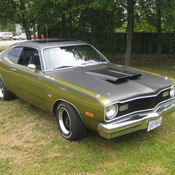 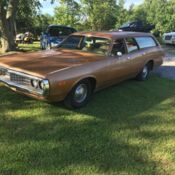 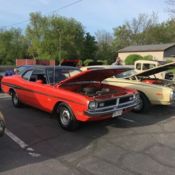 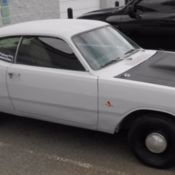 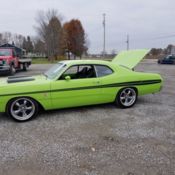