In 1969, the Dodge Coronet/Super Bee twins were celebrating the end of this legendary body-style (1970 received a not-so-popular facelift), and the horsepower was still as strong as ever. This cool 1969 Dodge Coronet Super Bee Tribute wears that final year with pride, with a great yellow paint job, aggressive attitude, and that powerful 318 V8 under the hood. Straight lines are especially critical on Mopar's iconic fuselage styled cars, and you can see from the unbroken curves... along the flanks that the bodywork has been well done. But the sheetmetal is only half of the story. Yellow was on Dodge's color pallet in 1969, but it never looked this bright and impactful from the factory in that year, but the louder shade looks amazing on this car. There has been an investment in a modern paint, and a professional hand applying it. So, now all the subtle creases of the Coronet's bodywork really pop when the sunlight hits this straight coupe. And combined with the black vinyl top, blacked-out grille, and black Super Bee stripes, it's an aggressive-looking package that didn't disappoint Mopar fans in 1969 and is still has an intimidating look today. It also sports cool brightwork, like the unique chrome bumpers fore and aft, as well as the trim that demarcates the yellow finish from the black on the sides of the car. We even love the blacked-out look of the 20-inch 5-spoke wheels, because they help highlight the overall black-and-yellow paint theme. When you have a pillarless hardtop like this, you know you're going to love cruising with all the windows down. That's why it's also great to have the tan leather interior match the quality of the exterior so nicely. The driver and passenger get high back leather bucket seats with a comfortable center console in-between. This is a nice reminder that the Dodge Coronet was based on was also built to be an all-day, long-distance cruiser with plenty of room for the whole crew. The rest of the interior is fresh and clean too, which makes it all feel like a period time capsule. The tan dash and painted portion of the door panels match the upholstery wonderfully, and everything from the heat/defrost controls to the three-spoke steering wheel with the horn ring has the right vintage feel. Out back the spacious trunk has all the space you'll ever need for car show goodies and/or luggage, and it's nicely fitted with a reproduction mat and full bias-ply spare that may even be the original piece. When it's time to go to the car shows, we know you'll be spending all of your time with the hood up showing what lies beneath. That's because within the nicely detailed engine bay sits a Mopar orange small-block that is most likely still the car's original. The 318 V8 powered by a 2-barrel carburetor is a dependable runner that starts right up and runs great, just waiting for its next opportunity to hit the road. The entire engine bay has a very tidy presentation so that nothing gets in the way of people seeing the shiny air cleaner and valve covers, and the Mopar block that fills the space between the fenders. Plus, with the rumbling Flowmaster dual exhaust, everyone will know you're coming even if you haven't come into view yet. And Mopar people know the Torqueflight A727 three-speed automatic and 8.75 rear end is the kind of stout equipment you want for getting the power to the road. Finishing the look is a set of black 20-inch rims that look downright sinister, wrapped 235/45/20 front and 275/40/20 Bridgestone blackwall radials. Nicely restored and with a very capable small block under the hood, great bodylines, and a handsome leather interior, this is now worthy of carrying the Super Bee name. It's the muscle car you've always wanted in a turnkey ready package for a fraction of the price. Call now!! 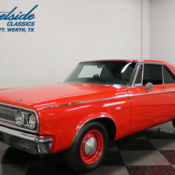 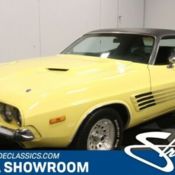 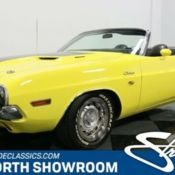 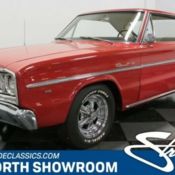 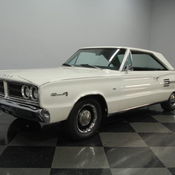 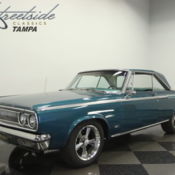 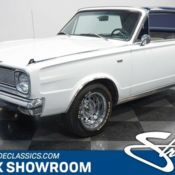 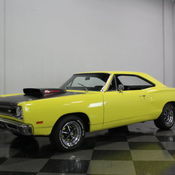 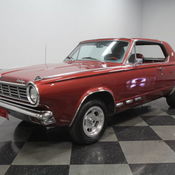 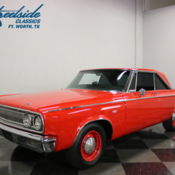