Here's a sharp looking Mopar muscle car in all of its glory. This 1973 Dodge Charger SE absolutely radiates vintage appeal and still features its original colors both inside and out. It's been armed with an ultra-coveted big block engine most synonymous with Dodge performance during its era that's been recently rebuilt while enhanced with some well chose aftermarket components and is running at its best. Long and angular, with a sharply inclined front windshield, this...Charger looks like a predator even when sitting among its muscle car brethren. Its bronze metallic paint is really nice, with a great shine and consistent reflection wherever you look. The contrasting black vinyl top is a defining styling element for the Chargers of this era and the one here is fresh and well fitted, with no peeling or bubbling in sight. As the vinyl gives way to the rear roofline, a trio of vent-shaped windows and a Dodge emblem on each side give this Charger a style all its own. A new-looking front air dam sits just under the front grille, the spoiler mounted on the deck lid is in great shape and the exterior alignment on this Dodge classic appears very precise even from up close - the doors are surrounded by tight, uniform gaps and as you trace the trim running the lengths of its sides you'll notice how even it is as it transitions from fender to door to quarter panel. The interior has been well kept and has seen some refurbishing over the years while still retaining its factory configuration. Both the front buckets and rear bench seats are sporting fairly new vinyl covers, judging from their well-fitted, creaseless appearance. The dash area is a definite strong suit on this '73 - the factory gauges in the cluster are all clear and easily readable and the pad running across the top shows no cracking at all. A pair of aftermarket displays have been added to keep tabs on fuel and vacuum levels while just below them, the clean center console offers up another signature Dodge styling element - a bona fide pistol grip shifter. The light tan carpeting lining the floor is also in good shape and features a pair of contrasting Dodge-branded floor mats in front. The trunk area appears to be very solid and even with a full size spare waiting inside there's all kinds of room on hand. Raise the hood and you'll find the most sought after Dodge big block of its era - the 440 cubic inch engine. It's been armed with a Holley 4-barrel carb, Edelbrock heads and an Edelbrock intake manifold to up its already considerable output even further, and an MSD coil and ignition wires have been added to maximize spark. The throttle response on this Charger is impressive as it pairs with a 3-speed automatic Torqueflite transmission and the deep roar emanating from the long tube headers leading out to its 3" dual exhaust will serve ample notice of your arrival. The looks of the engine compartment are very much on a par with the power its harboring - there's a nicely badged chrome air cleaner, as well as a chrome alternator and air conditioning compressor inside, and all surfaces are impressively clean. With traction bars mounted in back, maximum power hits the pavement, while power steering and power disc brakes at all four corners make this Dodge an easy navigator with plenty of stopping ability as it cruises on its set of 15" stock wheels wrapped with BF Goodrich T/A radials. With its freshly rebuilt big block power and outstanding curb appeal, this 1973 Dodge Charger SE is a definite "must see". Call today! 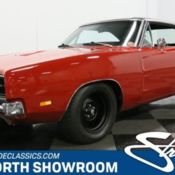 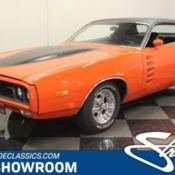 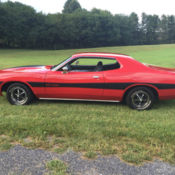 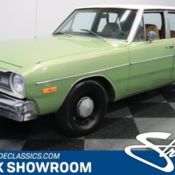 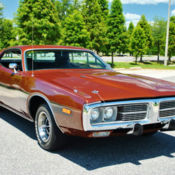 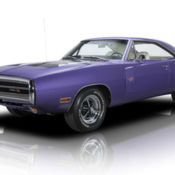 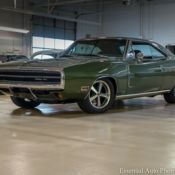 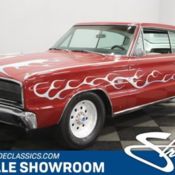 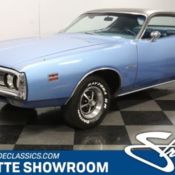