Mopars are still grade-A investment muscle, and if you're going to park some cash in a car with a pedigree, we might suggest this 1970 Dodge Challenger R/T, complete with its numbers-matching 440 Six-Pack engine, 4-speed manual gearbox, and a ton of documentation. This car is the real deal. Subtle muscle cars with big engines are just plain nasty. While Chrysler was famous for their high-impact colors, nobody would see this cool dark green Challenger coming. It...could hunt out in the open in 1970 and today it remains an extremely rare find, particularly in this condition. It is gorgeous and it stops people dead in their tracks and while we wouldn't say the paint is perfect, it definitely retains a great shine and finish throughout with only the smallest of imperfections. Panel gaps are very good and we like the fact that it's a "Stripes: Delete" car, adding to the car's subtlety. It does have hood pins, correct R/T badges, and those intimidating '440' emblems on the hood, so nobody's going to mistake this for grandma's grocery-getter, don't worry. It's also got the correct driver side outside mirror, nice chrome and good glass, so you can show and drive it with pride. If you're into rarity, this car totally nails it. We have to admit that the green interior works rather well and the industrial look of the 4-speed shifter (complete with pistol grip) coming out of the transmission tunnel suggests this car was built to do one thing only. Adding to the rarity, it is also a center console delete car, yet it does have a full set of Rallye gauges, including a correct factory tach, as well as the woodgrained wheel and dash inserts, which add a bit of upscale elegance to Dodge's premier pony car. It does have a replacement AM/FM radio that fits right were the original was, but otherwise, it carries nothing that will get in the way of going fast. It's all beautifully restored and nicely preserved, including the trunk which is filled with a correct mat and space-saver spare that appears to have never been used. The mill under the hood is the original, numbers-matching V-code 440 cubic inch V8 topped by a trio of 2-barrel carbs, known as the Six Pack. With 390 horsepower, it was second only to the Hemi, in terms of power, but if you talk to guys who were there, they'll probably admit that this car was probably unbeatable on the street. It's beautifully detailed with Hemi Orange paint, a correct air cleaner with decals, and factory cast iron exhaust manifolds. The block carries casting number 2536430-7, date code 6-5-69, and a correct partial VIN, which is also found on the transmission, cowl, and radiator support. It's the real deal. The 4-speed manual gearbox channels power back to a set of 4.10s in the Dana 60 rear end, and with that you know this is a Super Track Pak car and obviously built for combat. The undercarriage is spectacular, painted to match the body and nicely detailed with a new exhaust system, brake components, and shocks, suggesting that it hasn't been driven a whole lot since it was finished. It starts and runs extremely well, and if you're going to drive a Mopar, you'll be hard pressed to have more fun than in this Challenger. Correct Rallye wheels finish the look and are wrapped in staggered 235/60/15 front and 275/60/15 BFGoodrich T/A radials. Documented with Galen Govier paperwork, restoration photos, and other nice details, this is a pedigreed Challenger in a rare color combination that's 100% ready to rock. Call today! 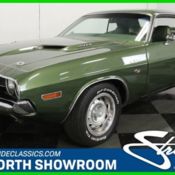 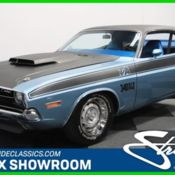 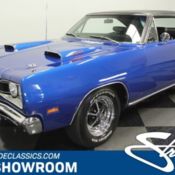 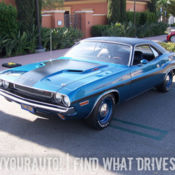 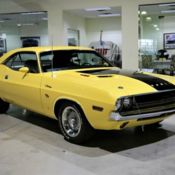 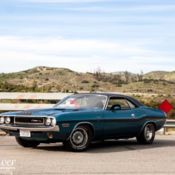 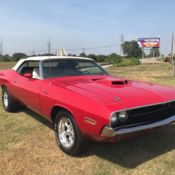 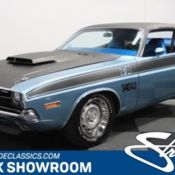 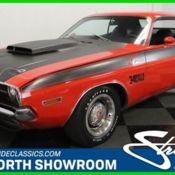 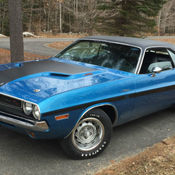