1964 Dodge W300 Powerwagon
1 ton 4x4
Runs and drives pretty good. (for a 1964 1 ton 4x4) I take it to work occasionally which is about a 15 mile drive each way
The Good:
*Original 318 poly V-8 (I believe they made 333 of them with the v8 in 1964)
*Original NP-201 transfer case. Twin stick
*PTO for front mounted winch on the transfer case
*Original 4-speed manual transmission with hydraulic clutch
*Dana 70 rear axle 4.88:1 gears Posi
*Dana 70 front axle 4.88:1 gears open I believe
*Both axles are from a 1970 W300 and have 8 lug wheels
*New brakes, wheel cylinders, bearings and seals in the rear
*Freshly packed bearings in the front
*Original Power assist brakes. (the booster is mounted to the frame under the drivers seat)
*New master cylinder
* steers nice and drives straight. not much play in the wheel
*Converted to electronic ignition
*converted to spin on oil filter.
*Solid 8 ft box from a 1970 - 1972. it's dented up but it has no rust holes.
*former US air force base truck, then fire dept truck. (under the black is yellow, under the yellow is blue)
*OEM front brush guard.
*Awesome custom front and rear bumpers. They are welded up to be air tanks.
*New windshield seal
*Solid doors, fenders, roof, running boards, hood, and cab for the most part. Originally from Wyoming / western south dakota area, so no salt from roads.
*4-wheel drive works

* Engine does not leak oil or coolant. Transmission and axles do not leak oil. Transfer case has a small drip where the front drive shaft comes out.

The Bad:
*Brake lights, tail lights, and blinkers are not wired up currently. (rear light sockets are present, just needs to be wired)
*Could use new exhaust, but what is there does work. ( glass packs and straight pipes with a couple leaks)
*float sticks sometimes on the Holley 2 barrel carb ( later 70's- 80's carb)
*Tires are old cracked and checked. They have tubes so they hold air. I have driven it 55-ish MPH on the freeway with them. It's not so bad.
They ride OK after you get a couple miles and they warm up. Sometimes it gets the "death wobble" when the tires are cold. It has never done it after the tires have warmed up ( get new tires and problem should be solved...)
* Cab mounts are rusted, but not all the way through. Typical sweptline stuff.
* no front winch or PTO shafts
* No speedometer cable
*drivers half of the seat is tore up ( has a seat cover on it now)
* needs a hand brake lining. (for the NP-201 output shaft drum. I have the old one, it just needs to be re-lined.)
* the rust free 8ft sweptline box is not correct for this chassis, should be a 9 ft.
* about4 inches was cut off the end of the frame at the back of the truck
* no powerwagon emblems on the hood. I do have the Dodge fender emblems, but the holes are filled in on the fender.
* no sun visors. The rods are there, but the visor part (cardboard) that was originally there is gone
Awesome looking truck. Rare and fun. Gets Tons of attention. It's not perfect, but it's cool!
It does not fit in my garage, and I live in town so it's not very practical for me to keep
I hate to see it go, but it's time to get something I have more of a use for.
Drive it home if you live somewhat near me. I wouldn't go more than a couple hundred miles with it because of the tires and tail lights
I can hold on to it until shipping arrangements are made by the buyer. Generally around a grand or so to ship a vehicle.
I have tried to describe it as best i can. If you have any questions feel free to ask and I will try to answer them. 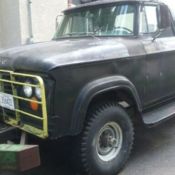 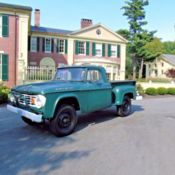 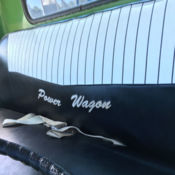 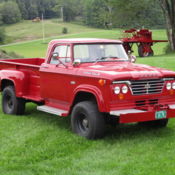 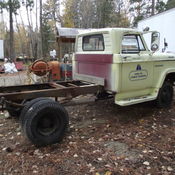 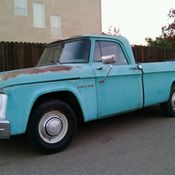 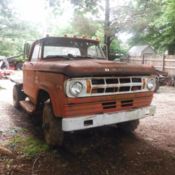 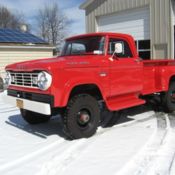 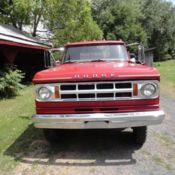 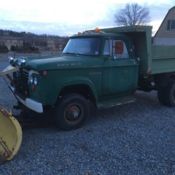