it is folks this is the auction you've been waiting for. Welcome to my auction. this Dodge Full time 4x4 runs good. The person I got it from said they used it as a dailydriver for about a year. They have only had to put an alternator, attery, amp; I put in a starter after having the vehicle a week or so. tThe former starter was dragging, nd would barely start it sometimes. I've been driving it daily also. It runs good,I've had itgoing on a couple weeks. I think the prior owner said that there is no choke hooked up. It starts fine without the choke however. O.K. so we've established that it runs good. I think its slightly missing. Which causes slight odd vibrations. Other people have also said it sounded like an excellent engine to them. They would have no reason to lie about it. Those are some pros. Now for son cons. The gas gauge doesn't work. The oil pressure gauge registers the engine as low. Like one or two notches up of the 10 or however many there are notches there are. Its possible the oil pressure gauge isn't working right. Several things on the truckdon'twork at all. All of the trim is gone. There are either the holes or the rivets sticking out where the trim used to be. Their is no front bumper or grill. I'll list more cons, nd more pros further through the description. Tires have been on it awhile. They still have some tread on them. The front end probably needs aligned. However if need be after you buy this beauty. I'll drive it to you location for 10 bucks an hour, lus you pay for least one meal a day, nd a motel room every 48 hours plus a bus ticket home (airplane ticket if its over 300 miles)plus you buy the gas to get your truck to you. I think it will make to anywhere in the USA or neighboring countries good enough. Now for some more details about it. Front windshield has a crack on the drivers side around a foot long give or take. There's heat, ut the blowers not working. Nice Sony Explode am FM CD player with aux. jack, nd remote control. Two door speakers. Sound good for what it is. Seat cover that covers the seat which appears to be in good condion unless you look at where the holes are. the material is in alright condition, ut there are rips in it under the driver etc. it has a blue seat cover . The cab is carpeted. The carpet needs shampooed. I'll at least clean it better before you come pick it up or beckon it too you. Their are a few small dents on the body of the truck. Nothing real bad except on the drivers side front fender. Looks like it bumped into something. There are a few more dents which some might consider bad. The body is rough. Be sure to have me get you more pictures of the truck for anyreason that you feel you would be more comfortable seeingbefore bidding. The 4x4 unit is a full time 4wheel drive. When putting of into 4 wheel drive you don't have to get out to lock in the hubs. You just pull back a gear shift located on the the center floorboard in the cab in front of the bench seat. Pull it back while idling,and maybe giving a it a little bit of throttle. The four wheel drive lit illuminates on the dash. Just like that your in 4x4 mode. The 4x4 does work. It will climb very good compared to 2wheel drive pickups. The prior owner stated he put a lift kit in IR. Ihaven't encountered any mechanical problems other that whats stated above exceptoccasionally the transmission takes a second to engage. This happens when its cold mostly. the powersteering also takes a second to engage when its cold. even then its rare. The cab inside is rough. One of the door panels os off. This was to get the door working. Then the door stopped working again. A guy would need to findadequate clips to get the door working right. The door panels were put back on the doors with screws here, nd there. The former factory clipsweren't effective. Needs a shiftknob for the transfer case. Thisdoesn't affect the workingperformance of the 4x4. It needs a dome light cover. dash panels are missing a few screws. glove compartment needs a latch. The words "Sweet Poison" are written on theglove compartment. I'm not sure if this is the trucks name. It was therewhen i bought it.

After checking everything again. The seat wasn't in that good of shape. It was just where I could see it through the seat cover. It might have a few other cosmetic and/or other minor issues. I'm currently working on the windshield wipers. They work, ut I need to find a clip for the blades to stay on. Also the hood latch and cable needs repaired. After a payment is received I will buy the assembly. I'll either install it or just make sure its included with the truck. The auction does come with an extra air cleaner filter. transmission gasket, nd a couple other similar things.

Im still using the truck as a daily driver. Still runs great. The bendix on the starter is not working right. I'll take the starter back, nd replace it with its warrant.

There are lots of viewers, amp; several watchers. Act quickly if you're going to win. 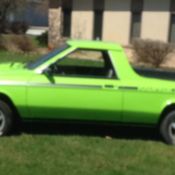 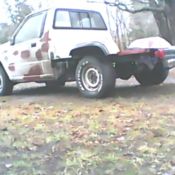 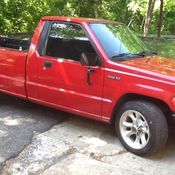 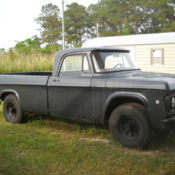 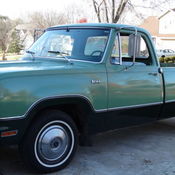 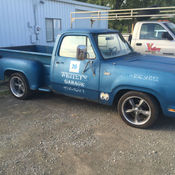 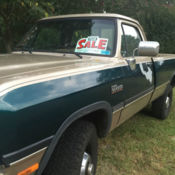 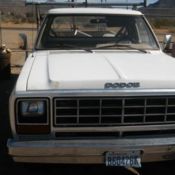 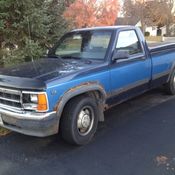 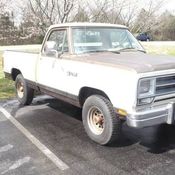