There's not much left to say about the DeLorean: a fascinating story of triumph and tragedy or a distinctive pop-culture icon? Can it be both? I'd argue yes, and this ultra-clean early DMC-12 shows just 5840 original miles (not a misprint) and comes with a very desirable 5-speed gearbox, so there's a good possibility that it is more than just a footnote in history.
The look is as stunning today as it was in 1981, and there aren't many cars more recognizable. For that you can probably thank the "Back to the Future" movies, but that's not the only reason why these cars are special. Instead, let's focus on the sleek stainless steel body, which was a great idea that eliminated the possibility of corrosion and made the cars look as expensive as they were. The downside of stainless is that it's impossible to straighten, especially when it's naked, so you can see at a glance that this DMC-12 has never been hit or wrecked and the panels are as crisp as the day they popped out of the press. With low mileage, it has always been a hobby vehicle, never a daily driver (they never were), and as a result has enjoyed the past three decades in comfortable climate-controlled environments that were ideal for preserving its condition. The gullwing doors fit well, the front and rear body caps aren't faded or cracked, and even the rubber bumpers and chin spoiler appear to be unaffected by the passage of time. There are lower-mileage cars, but not many that are this well-preserved.
The interior is just as futuristic and dramatic as the bodywork, and would you really expect otherwise? Handsome gray leather buckets look like they belong on a movie set, but are actually quite comfortable and easy to climb into, even with the tall sills. They show a little wear commensurate with age and mileage, and the softer, high-quality glove leather used in the DeLorean was more susceptible to use than the heavily processed stuff we're used to. Instrumentation is quite complete with large analog gauges in a very '80s pod atop the dash, and the center stack houses the AM/FM/cassette stereo and A/C controls in a logical fashion. Almost everything was standard in these cars, including power windows and locks, a tilt/telescope wheel, and a rear defroster. The critical feature, however, is the clutch pedal and 5-speed shifter, which transforms the DeLorean from ho-hum to a truly fun driver's car.
Open the rear hatch and you'll find the Renault-designed OHC V6 powerplant, which many will agree has gotten a bad rap over the years, again thanks to "Back to the Future." It's not fast, but the car does have a competent feel and running it through the gears makes it an entertaining drive. This one has extensive service records that show thousands of dollars in new parts and labor to make sure it runs and drives like it should, a very uncommon feature among low-mileage DMC-12s. It's very nicely detailed with all the correct decals and fittings under the hood and you'll note that the A/C has been upgraded to R134a refrigerant, so this is definitely not intended to be garage art. The list of new stuff includes a front end rebuild with lowering springs, new brake system, clutch master cylinder, starter, and a new fuel pump module. It's extremely clean underneath, befitting its low-mileage status, and even the original aluminum wheels look fresh and crisp with 195/60/14 front and 235/60/15 rear tires, one of the first production cars to offer staggered sizes.
Owned for many years by MLB pitcher Phil Niekro, this DeLorean is heavily documented with title documentation, invoices, receipts, and manuals, making it the rare DeLorean that's not only well-preserved, but also well-maintained. Call today! 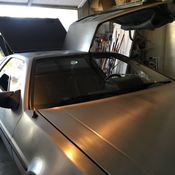 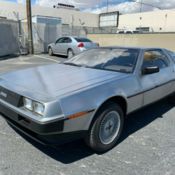 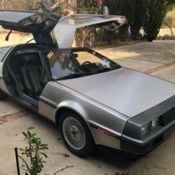 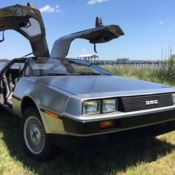 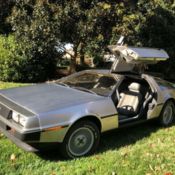 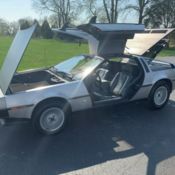 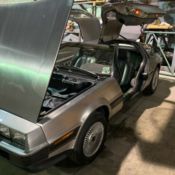 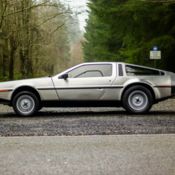 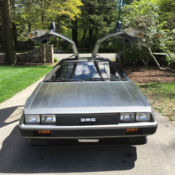 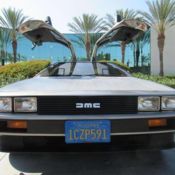