Top-of-the-line Speedster Motorcar built Auburn Boattail Replica! Driven sparingly since 2006 completion having just 2,579 miles. Packed with modern features including fuel-injected Vortec V8, 4-speed automatic, power steering, power 4-wheel disc brakes, chrome wire wheels, power windows & seat, air conditioning, and more! Awesome good looks, one owner history, and excellent road manners!
The Auburn Boattail Speedster is considered one of the most striking cars to ever hit the open road! As Auburn dedicated itself to art-deco design styles, it employed some of the best designers of the era. With the model 851 and 852 Speedster credits going to designer Gordon Buehrig, very few were ever made before Auburn had to close its doors forever. Because of this, they became highly sought after for highline collectors and reproduced heavily by a great number of replica car manufactures for enthusiasts. One of the original manufactures was Antique Autos of America based out of Largo, FL. As a prominent classic car restoration facility already, it began to produce some of the most highly acknowledged Auburn and Cord replicas ever manufactured professionally! It was largely under the supervision of project manager, Michael Atkins, who now owns and operates Speedster Motorcars in their new facility in Cullowhee, NC!
Speedster Motorcars produced this very striking 1936 Auburn Boattail 852 Speedster in 2006. Finished in a sporting shade of Deep Blue Metallic & Cream over Tan Leather upholstery with Blue canvas top, this example is powered by a brand new Vortec 5.3L V8, 4L60E 4-speed automatic transmission and 9" rear end! Complete with a host of factory equipment that includes staggered 15" wire spoke wheels wrapped in whitewall tires measuring 235/70R15 at the front and 275/60R15 at the rear, adjustable coil-over independent front suspension with tubular upper/lower control arms, machine-turned aluminum dash, air conditioning, power steering, power 4-wheel disc brakes, power seat, power windows, tilt steering column, Lokar shift knob, stainless brake lines, transmission oil cooler, air horns, Stewart-Warner gauges, cowl lights with side mirrors, front fog lights, simulated engine exhaust ducting, hood ornament & badging, billet pedals and vents, dual exhaust with twin exhaust turn downs! Safety items include emergency handbrake, seat belts, and turn signals.
The beautiful one-owner example has only been driven 2,579 miles since completion! Fitted with a full convertible top and canvas tonneau cover, this Speedster would be just as much at home driving across the country as it would be parked at a show. The car is titled as a 1936 Auburn Speedster with an Arizona-issued VIN identification, and should therefore have no issues registering at the DMV in most States. The high end build quality and preservation of this Speedster is still apparent today; all interior touch points as well as all exterior cosmetics are in fantastic condition with only the smallest signs of use. The car is sure to turn heads anywhere it goes and should make for many years of reliable transportation! For any additional questions, please feel free to give us a ring! Act quickly! 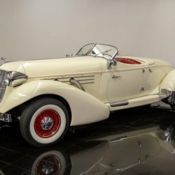 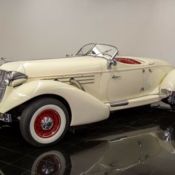 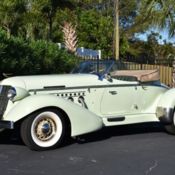 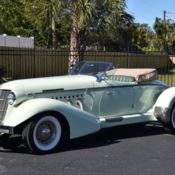 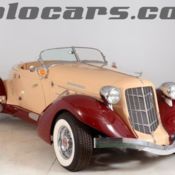 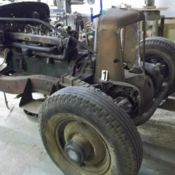 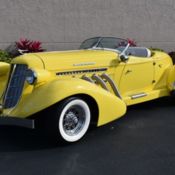 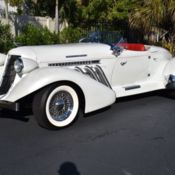 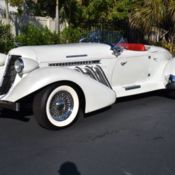 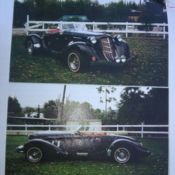