1936 Cord 810 Beverly Sedan
Cream exterior with Rich Maroon interior
Previously owned by Glenn Pray, the late owner of the Auburn, Cord, Dusenberg company as shown on the title
289 CID Lycoming L-head V-8 engine
Four-speed semi-automatic transmission with Bendix pre-selector
Four-wheel hydraulic drum brakes
Independent front suspension with trailing arms and transverse leaf spring; live rear axle with semi-elliptic leaf springs
Original price was $2,095 in 1936
Documentation includes miscellaneous parts and service receipts
Front wheel drive and hidden headlights are just some of the American production firsts that came on the Cord 810/812 automobile. Come on down to MotoeXotica Classic Cars and check out this 1936 Cord 810 Beverly Sedan.
The 810's reception at the November 1935 New York Auto Show was enthusiastic and orders poured in. Four very attractive body styles were initially offered, including two sporting sedans, the Beverly and Westchester, and two open cars, a two-passenger Convertible Coupe and the two-door, five passenger Convertible Phaeton Sedan. However, production started slowly with the first Cord 810's assembled and delivered to Auburn dealers in February 1936. By the time supply finally caught up with demand, some customers had changed their minds. The 810 returned for 1937, and a new supercharged engine option, developed by Augie Duesenberg, was now available. Only an approximate 3000 examples of the Cord 810 and 812 were produced in all and all survivors are rightly recognized as CCCA Full Classic automobiles. This 1935 Cord Beverly Sedan was originally finished in maroon and repainted once in a cream many years ago. It was acquired by Bobby Monical during 2011 from the estate of Glenn Pray the late owner of the Auburn, Cord, Duesenberg Company. The interior appears to be original and remains in remarkably good condition with only the rear armrests being restored about a year ago. Bobby Monical reports that this 1935 Cord 810 Beverly runs and drives well.
Finished in a cream exterior, the paint is in decent order but has obvious blemishes. Prospective owners have a choice – leave the car’s finish as it is or prepare to have it restored. The glass panels are in fair condition and the lights look good. The hidden headlights operate not by electric motors or via vacuum hoses but through a pair of mechanical controls, one on each end of the dashboard. The front side doors open in the so-called “suicide” style, while the rear side doors open conventionally.
This Cord rolls on Goodyear Deluxe All-Weather wide whitewall tires, size 6.50-16, with factory wheel covers. The car’s body panels are all in good shape with decent-looking bumpers.
Inside, this car’s Rich Maroon interior with cream accents is still in very good overall condition. The bench seats look great while the black carpet is in good order, as is the maroon headliner. The cream and metallic dashboard, with its multiple round gauges, including a tachometer, levers and other controls, still looks snazzy. The original, three-spoke steering wheel is present. The inner door panels, mirror glass and shift lever looks good.
Contemplated as a “Baby Duesenberg” yet made for only 1936 and 1937, E. L. Cord’s 810/812 series has been a collector favorite for many years. The 810/812 series succeeded the L-29 Cord, continuing Cord’s penchant for blending stunning styling with engineering wonders, all at affordable prices. Indeed, Cord chief stylist Gordon M. Buehrig penned the design, using cues from styles rejected by Harley Earl, his former GM styling boss. With its “coffin” nose, retractable headlights and pontoon-style front fenders, other new ideas included hidden door hinges, a hidden fuel filler door, variable-speed windshield wipers and a rear-hinged hood as opposed to the regular side-opening type.
Continuing to use front wheel drive meant the car had no driveshaft beneath the passenger compartment so there was no transmission tunnel to steal foot room and rob passenger space in the cabin. The car’s body was lower than many of its contemporaries and made running boards a thing of the past. Its Lycoming L-head V-8 engine was matched with a four-speed semi-automatic transmission with Bendix’s electrically operated pre-selector gearshift system.
Competition to this Cord in 1936 included Auburn’s Speedster, Buick’s Century, Cadillac’s Series 60, Chrysler’s Airstream, Duesenberg’s Model J, LaSalle’s Series 50, the Lincoln-Zephyr, Packard’s One-Twenty and Oldsmobile’s Series L.
Documentation includes miscellaneous parts and service receipts.
This car is currently located at our facility in St. Louis, Missouri. Current mileage on the odometer shows 90,543 miles. It is sold as is, where is, on a clean and clear, mileage exempt title. GET OUT AND DRIVE!!!
VIN: 81017944 (8101744 or 8101944)
Note: Please see full terms and conditions listed below that pertain to the purchase of any said vehicle, thank you. 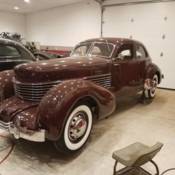 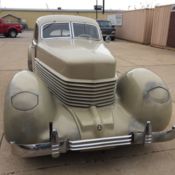 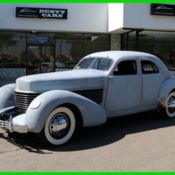 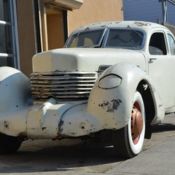 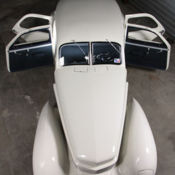 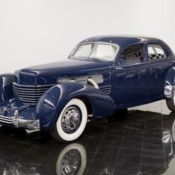 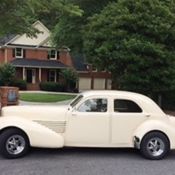 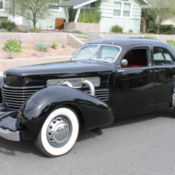 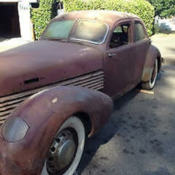 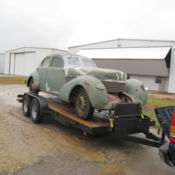