This car was traded to me a couple of months ago, I believe in honesty and will give you all the information I know here.
If you recognize this car, it was for sale on eBay a couple of weeks ago. The previous owner saw the auction and got in touch with me requesting to take it down so we could update it with more information. I believe this is very relevant as the car contains a lot of previously unknown upgrades, I will list the work that was done here above the original posting:
-OEM gas tank cleaned and recoated
-New 255lph high flow fuel pump, new fuel filter
-Rebuilt cylinder head, mild porting/smoothing of casting flash of exhaust/intake runners, jet valve delete kit, one new exhaust valve, new head gasket and new head bolts. New hydraulic lifters.
-'93 3000GT VR-4 alternator upgrade, 1G Eclipse Turbo MAF. Rebuilt throttle body, injectors, and new injector clips. MSD Blaster 3 coil, new plug/wires/cap/rotor, aftermarket fuel pressure guage.
-Pre-cat converter (directly after the turbo) deleted, EGR deleted, OEM exhaust manifold and turbo exhaust housing were also mild ported and opened cup where exhaust enters the turbo.
-New windshield, fresh rear windows tint, transmission serviced w/ new filter and ATF
-New front brake pads new front sway bar links, front wheel bearings serviced.

ORIGINAL POSTING:No part outs. These are climbing up in value so this could be a great chance to scoop one up. Sold AS IS and a CLEAN TITLE. You must arrange shipping or pick up. Other than meeting a courier at my place, I can't be bothered to drive it out somewhere and meet.
This is very clean for the age. The miles are low (57,000) and I believe they are original due to the condition of the car. This is turbo and it pulls very strong. Runs and drives with no problems. Mechanically it seems sound, no overheating or funny noises. Clean leather seats all around, no major holes or tears tinted windows all around too. Black powder coated wheels. Amenities function as they should including Cruise Control, Power Windows, Radio, Power Seat Belts, Power Antenna, Lights, Wipers, etc. However, the A/C seems to need a charge.
Being an older car, there are imperfections. No major deal breakers for sure, but I believe in transparency so I will list those here.
Cosmetically the chin spoiler is missing. There are some small dimple dings I have found. The paint on the hood could use a buffing. The trunk is missing plyboard that hides the spare. Minor scuffs and wear throughout the interior and exterior.
Mechanically, if you make a hard tight turn, there is a click. The coolant overflow reservoir has been replaced with a plastic bottle (I guess the OEM ones are hard to come by since they crack easily). The battery housing cage also looks homemade. There is an oil leak when you park it for a while, nothing massive.
Electrically, the radio controls on the steering wheel go in and out of working. Similarly, the ignition usually starts right up, but sometimes you need to turn the key a few times to get it to engage.
If you want a manual trans, the previous owner 1 mile from me that is selling one for a few hundred dollars. Also, the Starion & Conquest Universe Facebook group has a few guys on it selling chin spoilers if you need one.
Thank you for looking! 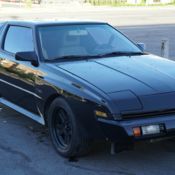 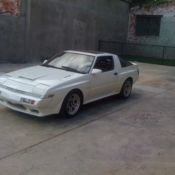 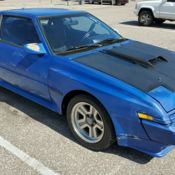 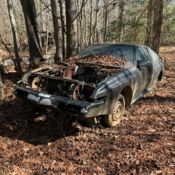 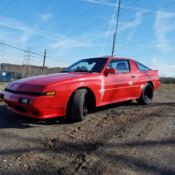 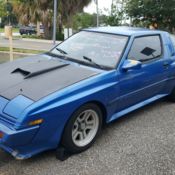 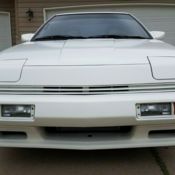 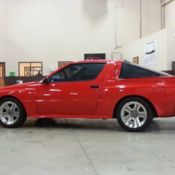 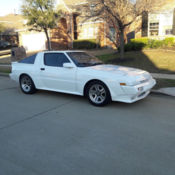 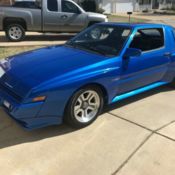