Are you looking for a hopeless and hideous money pit? Do you want to drive something that causes complete strangers point and laugh at you? Need a car in your driveway guaranteed to piss off your neighbors and lower property values? Well look no further than this horrific example of one of the ugliest cars ever made.
I purchased this 1983 Chrysler Lebaron Town and Country Mark Cross Edition as a joke. The seller owned 22 of these, YES JUST LEBARONS, and was liquidating his fleet. When I called, I told him I was looking for a car that had no rust-- and the Chrysler EVA "talking car" feature. He delivered on the talking car part, which reminds you to fasten your seat belts, and warns you of any faults-- like low fuel or engine oil pressure-- but, unfortunately, the seller missed the mark slightly on the "no rust" part.
I spent almost $1000 to have this car shipped across the country, and knew I made a massive mistake the moment it arrived. The car literally has rust on every panel. The floor has a double-fist sized hole in the rear seat, and the rest of it is Swiss cheese. The shag carpet is the only thing keeping you from being Fred Flinstone.
I should have set the car on fire the moment it arrived, but instead, I spent another $1000 to make it barely drive-able. I repaired the brakes, which didn't work, installed cheap cherry bomb exhaust, as the original was rusted and falling apart, and fixed various leaks... It still leaks, but there's no puddles... Though don't be fooled, I still wouldn't trust this car to make it across town.
The tires on this Lebaron hold air, but were probably installed during the Clinton administration. The carburetor is toast, giving the engine a rough idle when warmed up. There's also the constant risk of other drivers wrecking into you after being sent into an uncontrollable laughing fit at the sight of this turd. The interior is shockingly well preserved, but after years of water intrusion, the inside of the soft top is moldy, and smells like Grandma's basement filled with old newspapers.
Shockingly, the "talking car" feature works, along with the quartz radio (quartz????) as well as the windows and the power top. Unfortunately, the top latches are rusted and wont secure, and the rear plastic window has split. All the lights and the horn work as well, probably. Honestly, I don't even want to look at this car again, let alone check to make sure. Miles are TMU.
If this Lebaron were in mint condition, it would only be worth $3000 or so, and when you consider the cost of restoring it, the car is worthless-- actually less than worthless-- as it can't have any parts value. The car is parked in my storage barn, so I can advertise this car as a BARN FIND SURVIVOR OMG!!! My opening bid is $1.00, with no reserve. My sincerest condolences to the top bidder.
Here's a little video I made on the Lebaron earlier this year:

I Bought the Ugliest Car in the USA-- AND IT TALKS!!! - YouTube 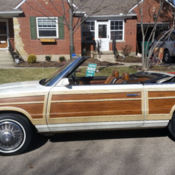 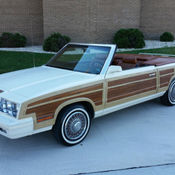 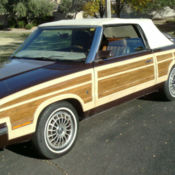 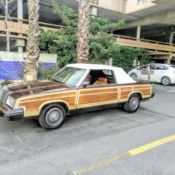 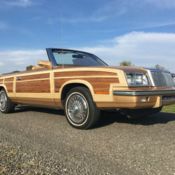 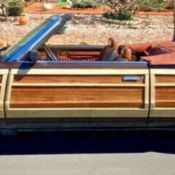 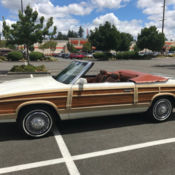 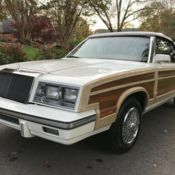 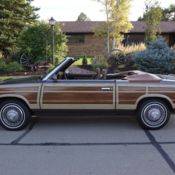 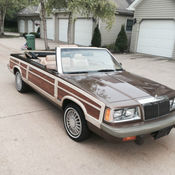