Ok, o sometimes you have to give up things you love for things you love even more. It’s a true RS/Z28 with factory AC and original paint. I’ve wanted this car since I was 14 years old and have known about it my whole life. The previous owner has owned it since September 17, 974. It was purchased by Mark with 15,645 miles and currently has less than 85,000 original miles. The motor, ranny and rear end are original to the car. Mark, he second owner was an Engineer so he kept meticulous records from 9/14/1974 – 10/5/1996 at 83,048. For most of it’s life this car was documented from every oil change to fill up with gas. The field book has date filled up, allons used, ileage, rice per gallon and total amount spent. Who does that? To say this is car was well cared for is an understatement.

Purchased new by Mr. MacGregor on 6/12/1973 with 0006 miles it is my understanding that Mr. MacGregor ordered a new Camaro every year. He had a long standing history with Waconda Motor Company in Coker City Kansas. He was a professor and like to parking lot autocross on the weekends. He always liked black cars and this car was special ordered black which means it’s a paint code and stripe delete ordered car. (the dealership installed the gold rally stripes.) When it was new at the dealership Mr. MacGregor had the car upgraded to Jim Conna standards. Headers were installed, ear sway bar turned upside down (it’s now correct), &M Shift Kit installed with stall converter. Torquer Intaker and Holly Carb were also installed before it ever left the dealer lot. It even originally had a Hone Overdrive but that was removed when it was traded in. The guy spared no expense to setup his car and if you pull up the address this car was originally registered to it is now a $2.5Million dollar home.

Mark purchased the car for $2,900 in 1974. It was a daily driver until 1980 when a new Citation replaced daily driver status. This car set outside during the day for work but never outside overnight. In 1975 he was messing around and slid the car into a stop sign pole. It bent the rear quarter over the left rear wheel. Since it was turned into insurance he demanded they replace the whole quarter with a factory full quarter. The rim was also slightly bent at the time. He decided to respray all the rims black at the time the quarter was installed. So the left rear quarter is not original to the car but it’s a factory piece installed in 1975. You can tell when looking at the paint and you can see where they blended into the door and roof line. As a side note, hen I purchased the car there were two small holes on the right rear quarter behind the rear wheel. I replaced the lower section of the quarter and had it sprayed satin black. It’s hardly noticeable unless you look closely but you can see the tape line.

Shortly after purchase, he car was gone through top to bottom. Compression within all cylinders is within 3%, ear end oil changed. I put a new radiator in because the old one was weaping around the filler neck (still kept original), ew plugs, ires, ear brakes and a completely brand new interior in the car. New dash pad, enter console, arpet, eadliner, tc. It’s first class. I still kept the 70’s touches but its all new and done right. New window felts and all panels were died back to black. I would hate for someone to paint the car but to make a really nice upper end car all that’s needed is a paint job and detail under the hood. The AC even works but the fuse is removed. It was tried just long enough to make sure the compressor still kicked on. It’s still the R12 freon. I don’t have any R12 and haven’t converted it to R134a yet. Even has new tires and a carb tune up. I seriously wouldn’t be afraid to drive this one across the country.

What’s this car need? Well, othing in my opinion other than a really good detail under the hood and a guy might paint the rims the correct color. It gets 10 times the looks compared to an original restored #1 car. The poor guy with the newly restored 70-1/2 Z28 barely got any looks at the local car show compared to this. It’s ready to be driven and enjoyed. I love the fact that I can enjoy it without having to worry. Door hinges are tight, VAC control lever broke and I haven’t been able to find another suitable 73 AC/Heater panel to replace it so to switch between hot and cold you have to reach under the dash and pull the wire. AC needs charged with R12 or converted. There’s really not much else I would change. There was no build sheet on the back seat and the tank has never been dropped but I assume the build sheet is on top of the tank still. Oh, nd I have the missing RS brace that goes over the battery. It will go with the car. The paint should be self-explanatory from the pics. It’s almost 43 years old. There is checking, ading and cracking. But it’s original. This is by no means an original paint show pony. It’s certainly not a rat rod either but it does have character and patina. Dings are minor in nature. Nothing fatal or that some paintless dent removal couldn’t take care of.

So, hy am I selling this car if it’s so great? I normally don’t sell much of anything, specially since I’ve wanted this car for well over 25 years. However, ometimes we give things up we love for things we love even more. My father, ell, y step father had a scare with lung cancer earlier this year. It just goes to show how short life really is. Good thing is that he made it great through the surgery and everything is good. But what a scare. Life is short and he never chases his dreams. So, found his dream car and am going to give it to him for Christmas as a complete surprise. Not even mom knows so if you know me and this car then please keep it to yourself. I already have the new car identified and fly down to Houston to pick it up with the next couple weeks. I don’t have to sell this car to purchase the new one but it sure would help. Besides, ’m a single dad with 4 little kids and we drive the 55 Chevy convertible (with LS2/Air Ride) most of the time since we can’t fit the whole family in Goldilocks.

What have I missed? Car is located in Tulsa Oklahoma. I’ll happily pick you up at the airport for delivery. $500 deposit due 24 hours after auction end. The reserve is low and I’m certain it will sell. It is listed elsewhere for sale and I reserve the right to end the auction early… however I do not intend to stop the train. I would really like for this to go to a true collector who would consider giving me the first right of refusal to buy it back should they ever sell it. Feel free to email, all or text with questions. Please ask all questions before you bid and not afterwards. And please contact me first if you have less than 10 feedbacks. Thanks!


Terms of Sale
See item description. $500 deposit due with 24 hours of payment. Full payment with 7 days. All funds must clear account before car will leave my possession. Please as all questions and/or inspect before placing a bid.
Shipping Information
Shipping the expense of the buyer. I can help arrange if needed.


The following two pictures are from 1975

Just to be clear, he gold stripes are not factory applied. You could not order a car with gold stripes from the factory. The black paint is original and the gold stripes were applied by the dealership before it ever left the lot when new along with the Jim Conna upgrades mentioned. For 1973 this is a very strong runner!

Ok, 've had a few questions so I'll try to consolidate the same of them here. The original intake, arb and manifolds are not with the car. They never left the dealership when new. Nor do I have any original sales paperwork other than what you see in the pictures. This was ordered and sold from a small dealership when new and the sales guy knew the car and seller when it was traded back in hence that information was relayed to the second owner. There is no other original documentation so technically my story can't be proven so please price accordingly. The left rear quarter and the blend areas are not original paint. The rest of the car is. I am very certain this will meet reserve and as a result I have no intention of ending the auction early. Thanks again and feel free to ask away! 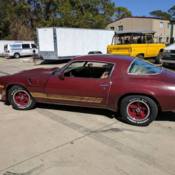 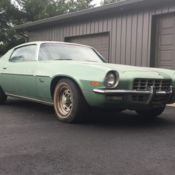 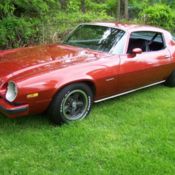 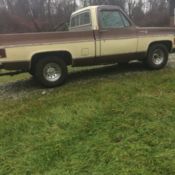 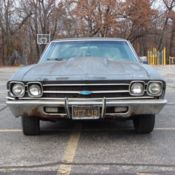 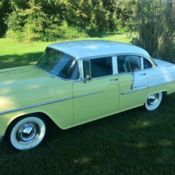 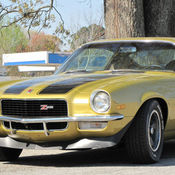 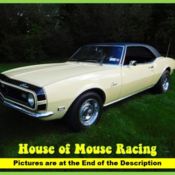 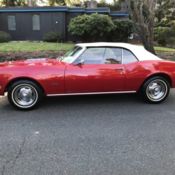 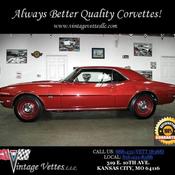