1971 Chevrolet Chevelle "Malibu 400"
Iâ€™m selling a Great American Muscle Car which I have owned since 2006.I have enjoyed the car but have my sights are on another, so it must go.
I have only driven the car to car shows and cruising around local towns, totaling a mere 3,000 miles since I've owned it. Always waxed, garage kept and has never been out in the rain nor snow. It is NOTa show car, but I do believe it is a good quality "pretty-original" driver that still looks awesome and gets thumbs-up everywhere it goes.
This 1971 Chevelle is a rare Malibu 400 model. It was built the second week of March and is only1 of 548 built.See information listed on picture included, information is from the web site www.chevellestuff.net
The Chevelle came from the factory with a 402cuin Big Block, but in the fall of 1971 it was replaced with a direct replacement "CE"402 block(CE155787- see below for information)under factory warranty at the Chevrolet Dealership. Only the block was replaced, all other items were reinstalled and are original to the car which include the heads, intake, carburetor, oil pan, water pump and distributor.
These are some other items that are original factory options and still equipped on the car:Muncie Heavy Duty 3 Speed Manual Transmission(vin number stamped on housing),12 bolt 3:31 Posi Rear End, F41 Suspension,Front & Rear Sway Bars, Entire Black Interior includingBench Seat TypeincludingLap andShoulderSafety Belts,AM Radiowith front and rear speakers, SportSteering Wheel,Deluxe Astro Ventilationwith upper and floor controls, Chrome Wheel Well Trim, ChromeRockerMolding, and the Original Spare Tire andBumper Jack.
All of the electronics, lights and accessories work perfectly, except the gas gauge hasn't worked since I have owned the car (2006). TheKey Buzzereven comes on when the door is open and the key is in the ignition.
The car drives well and needs nothing to be enjoyed and shared with others at car shows.
The car sits onCragar SS Rims -15x8 with215/60/15BFG RWL on the front and 15x10 with255/60/15BFG RWL on the rear.
The exterior is a 10-footer with is original sheet metal. The paint job was done by the previous owner (early 80's) Cranberry Red matching the original Factory Color and cowl tag code 75. The previous owner also told me he only had to do a little body work hence the reason it only needed a frame-on restoration. And at that time he also added a mild cam, ceramic coated headers, MT valve covers, dual exhaust and an air cleaner.
It fires right up, runs, drives, and stops great! The engine growls, the transmission shifts smoothly, the brakes are strong and it moves very well. Structurally, the car is in great shape. The frame is rock solid. The floor pans are actually very good and the trunk is literally perfect.
The auction also comes with the set of rally wheels and tires that were on the car when I bought it, as well as these other original items from the car...the air cleaner, valve covers, exhaust manifolds, original spare tire & rim. I will also include a car cover, operators manual, 1971 Dealership Chevelle Brochure, and 2 sets of car keys.I can only add 24 pictures so I added the most relevant I could. I will not end the action early unless it sells locally, so bid accordingly. A $350 non-refundable deposit is required as soon as auction ends to myPayPal Account.Final payment and pick up will happen within 7 seven days of auction ending.Winning bidder will contact meafter the Auction ends to set up the final arrangements.Car must be picked up within 7 days of auction ending.
The car is sold as-is, no warranty.
Do NOT bid if you don't have the Cash nor intensions of not completing this Auction. Thank You.

What does "CE" block mean...Most over-the-counter replacement engines or short blocks in the 60's were ordered by part number based on their application, and had blank pads; those ordered specifically as 5/50 warranty replacements in the late 60's - early 70's were "CE"-stamped (and 5/50warranty replacement transmissions were "CT"-stamped).

The CE block could NOT be ordered by an individual at the counter or exchanged as a core by an individual. It was only issued after being inspected by an authorized dealer and approved by a GM area service representative. All CE engines were short blocks, they came without heads and attaching parts like water pump, intake etc. The dealer transferred those parts from the defect engine or ordered new from catalog. 99% of the engine problems were with the rods, cam and cranks and associated bearings. Rarely did an intake manifold break. The servicing dealer was required to return the defective engine to Chevy for failure analysis.

Had some questions and here is my response...
Clean and Clear Illinois Title.
Headliner is original and in great shape.
Rear tires do not rub, nor are the wheel wells cut. They are original to the car. The 15x10 rims on the rear have 5.5 back spacing. Special order from Summit back in 2009 I believe.
Also, the Cowl-Type Hood was added in the early 80's by the previous owner when he painted the car. Forgot about that.
Radiator is also original to the car. Doesn't overheat. Had it flushed out back when I bought the car. Runs about 180 to 190 with the 180 thermostat.
The front wheel wells are original to the car too and are made of a plastic material. They say... 'Made in Canada LH and RH and a GM part numbers on them.

Just to be clear....
Again, like I stated above.... the car was painted by the previous owner in the early 80's, that is close to 40 years ago. Eventhough it shins very nice, and it really does, it has some flaws, like scratches, nicks, cracks, door dents, etc....
Thank You!

My 1st YouTube video of the paint and flaws on the car..https://youtu.be/-p4_McNe3uU. 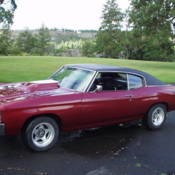 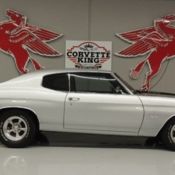 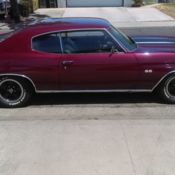 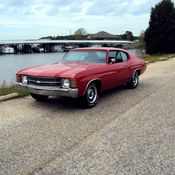 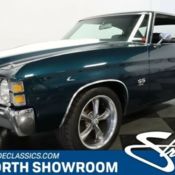 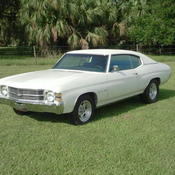 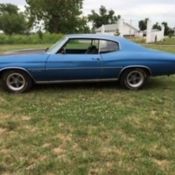 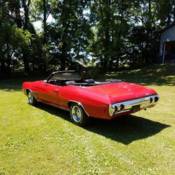 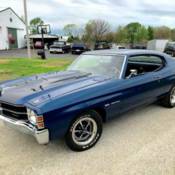 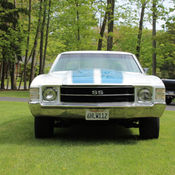