If this 1967 Camaro RS/SS 396 was the real deal, it would cost at least twice as much. So why not enjoy the look and feel of the nastiest F-body built in 1967? With black paint, a 4-speed gearbox, cold A/C, and that big block under the hood, this is a big, bad Camaro that runs as great as it looks.
Black isn't this car's original color but it sure looks right on this one. It's dressed like an RS/SS, so it has the folding headlights, cowl induction hood, and rear spoiler that make it the best-looking Camaro we've seen in a long time, and it even includes the single-element taillights and RS gas cap. A total lack of stripes adds a touch of formality to the overall look, and if a Camaro can be stealthy, this might be it. Bright chrome bumpers look especially good against the black paint and the clean lines of the early Camaro always look best in dark colors.
The all-new black bucket seat interior is the only choice with the sinister black paint job and it's just as upscale-looking as the bodywork. It has been treated to new seat covers, fresh carpets, reproduction door panels, and a dash full of crisp, clear gauges and auxiliary dials underneath. A 4-speed manual gearbox uses a Hurst shifter with a cue ball knob and no console for an industrial all-performance feel. The new Vintage Air A/C system uses a factory-style set of sliding levers to blend in almost invisibly and the factory vents indicate this was a factory A/C car. It's not over-dressed, just functional. The trunk wears correct spatter-finish paint and needs only a reproduction mat (very inexpensive) to complete the high-quality finished look.
It says '396' on the air cleaner but it's actually a burly 454 cubic inch V8 living under the hood. It looks right wearing Chevy Orange paint, chrome valve covers, and a proper open element air cleaner that inhales through the cowl induction hood. Upgrades include the polished Edelbrock intake manifold, Holley 4-barrel carburetor, a giant aluminum radiator, and long-tube headers to fatten up the torque curve. You'll be glad for the power steering and power front disc brakes on a car with this much performance and it sounds spectacular with the fresh Flowmaster dual exhaust system cackling underneath. There's also a 10-bolt rear end with easy-cruising highway gears inside and the chassis is just as clean as the engine bay, worthy of the car's expensive look. Handsome Rally wheels and 215/70/15 white-letter tires complete the look.
This is a very impressive car on every level. Smart upgrades make it a lot more desirable and there's just nothing like a big block Camaro dressed in basic black. Call today! 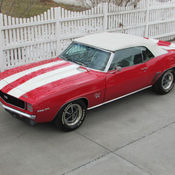 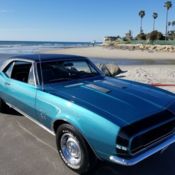 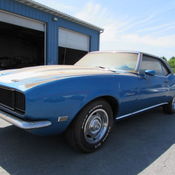 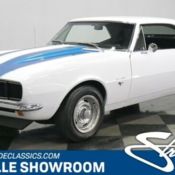 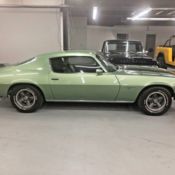 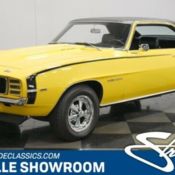 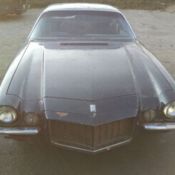 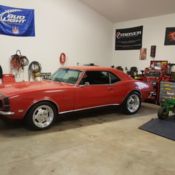 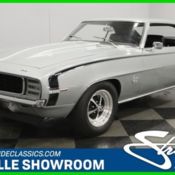 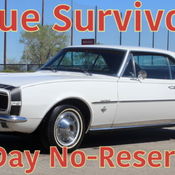