No other automotive nameplate occupies the same time-tested status as the Suburban. Getting its start all the way back in 1935, some eleven generations later it's the longest continuously running brand in automotive history. This 1968 Chevy Suburban is a fitting homage to that extensive legacy. Combining classic styling with some aesthetic and feature upgrades, it's one seriously tasteful and unique SUV for the ages. Although five generations had hit the market before this one, it was... the '67-'72 models in particular that fueled a sharp rise in SUV sales that would carry on to this day. Sure, the earlier versions sold, but this body style really caught people's attention and sold more than four times better than its counterpart a few years earlier. Look at this Suburban and you can see why. It's got a classic ruggedness to it, sturdier and beefier than earlier versions. Its Whataburger Orange exterior (that's right, the actual paint code was supplied from Whataburger, so it's an exact match) compliments that timeless look while at the same time giving it a definite vitality. Some well-applied and tasteful modifications combine with the Suburban's standard styling features to create an SUV with a decidedly custom yet utilitarian appearance. Sure, it's a conversation piece, but you could also see yourself behind the wheel, taking it out on plenty of adventures. It sits just a little lower than most, but still with plenty of clearance for its bright Baby Moons. It's got a very distinctive look from the sides, with only two doors for the driver and passenger, long windowless panels down each flank, and a set of ambulance-style doors that replace the standard liftgate with an almost gull-wing appearance when open. Fit and finish is quite good, although not perfect, so you won't hesitate actually putting this 'Burban to work. And the high-impact orange finish is brightened even further by the spacious chrome grille, bumpers, door handles and mirrors, all of which look brand new and glisten in the sun. Inside is a very comfortable-looking and well thought out interior. Its sheer spaciousness is impressive as well Ã¢â‚¬" plenty of room for cargo. The comfortable, high-backed, power cloth bucket seats and middle console were all borrowed from a later model Chevrolet truck or SUV and fit perfectly in the front cabin. The padded dash carries a soft tan paint that is matched on the door panels, and the plush carpet in the front cabin is newer and really warms things up a bit for the driver and passenger. Ahead of the driver is a later-model 4-spoke Chevrolet steering wheel mounted on a tilt column, and just beyond it the factory gauge bezel is filled with clear and original gauges that monitor the engine's vitals. An aftermarket R134a A/C system was neatly installed under the dash and it blows nice and cold, while tunes are provided via a modern AM/FM/CD/AUX head unit inside the factory dash slot. Out back, the cargo area has been finished with dark wood slats on the floor for a period look, and the inner walls and headliner is wrapped in tan upholstery to match the subdued theme of the front cabin. Plenty of room to install a couple of rows of seats for your friends, or to haul just about anything you can find at Home Depot. A Chevy 454 V8 sits in this amply-sized and very clean engine compartment, decked out in matching orange paint on the inner fenders and firewall that makes the engine and components, including the black-out block, and chrome air cleaner, compressor, and alternator, really jump out at you. M/T valve covers were painted to orange match the truck, while a newer Edelbrock 750CFM 4-barrel carb and HEI ignition ensure this Suburban is very reliable. A TH350 3-speed automatic transmission spins a heavy-duty 12-bolt-rear end while power steering and front disc brakes make moving all this metal quite manageable. Underneath, the Flowmaster dual exhaust system sounds great and is surrounded by a nice, straight undercarriage that looks exceedingly unblemished for the decades of duty this venerable SUV has provided. The stance on this Suburban is decidedly modern and low, and its attention-grabbing Baby Moon wheel are wrapped in 215/70/15 front and 275/60/15 rear blackwall radials. Looking for a truly unique classic SUV that's equipped for the present and waiting to take you and your passengers on a new chapter of adventures? This '68 Chevy Suburban is the one for you. Call today! 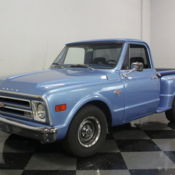 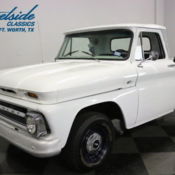 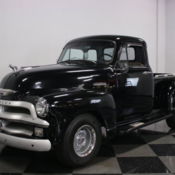 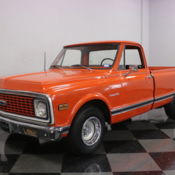 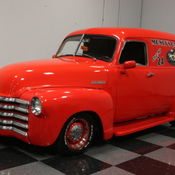 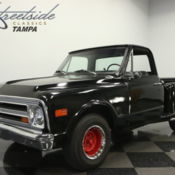 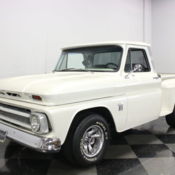 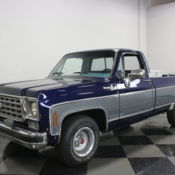 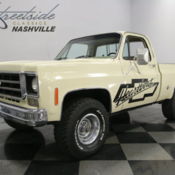 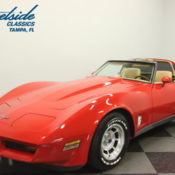