1965 Chevrolet Impala ''13th Hour" previously owned and restyled by Bob Huffman of Norwalk, California. Bob bought the Impala brand new from Paramount Chevrolet in Downey, California in September of 1964. He paid $3100.00 for the car, took it home and started restyling it almost immediately. The first version of the Impala was completed in 1966, featuring a bumperless front end design and Hydraulics on all four corners. The hydraulics were installed by Bob and Jim Dickerson of Hollydale, California. The rear end of the car was restyled by removing the stock taillights from the trunk lid. The stock taillight holes were welded shut before Bob rounded the corners on the trunk-lid and installed new taillights between the trunk-lid and rear bumper. The new tailights were tunneled in. The body was nosed, decked and shaved for door handles and trim before the car was sent to the paint shop. Bob did everything on the car himself, except for the paint. David Brewer of Paramount gave the car a gold metalflake paint job at Art Chrome Body Shop. David lived down the street from the Art Chrome Body Shop, and he cut a deal with them to rent the spray booth. Once completed, Rod & Custom magazine did a photo-shoot with the car in 1967. The story appeared two years later, in Rod & Custom June 1969.[1]

In 1967, Rod & Custom Magazine published a concept drawing by Harry Bradley in their October issue, that Bob really liked. He asked his friend Tom Chafin, who worked for George Barris at Barris Kustoms at the time, if he could help him restyle the car after Harry Bradley's design. Tom agreed, and he and Bob started restyling the car again in October of 1967. The second version of the Impala was completed in 1968, featuring a Pearl Orange paint job. On his way home from Seattle the car was damaged in a snow storm. The damages were fixed, and the car was painted Pearl white.[1]

After the car had been restyled after the Harry Bradley design, and repainted white, Bob was at a repair shop in Torrance, California when a guy came in and asked if it was his car sitting outside. Bob told him it was his car, and the guy introduced himself as Harry Bradley. He then asked Bob where he had come up with the style for the car. Not knowing what the guy wanted, Bob answered Rod & Custom Magazine. Harry asked if he could do a photo-shoot, and Bob answered yes of course. A few days later Bob went to Harry's house at the beach. They did the photo shoot, and Harry showed Bob his cars before, Bob left again without knowing how famous Harry was going to be. Harry's story on Bob's Impala was published in Rod & Custom April 1969.[1]

Bob sold the car to Bob Schoonhoven, a car show promotor and car builder of Seattle, Washington, for $3000.00 in 1969. The car was sold so Bob could buy his first home. After Bob had sold the Chevrolet he met Lee Prat, who told Bob he had designed his LeSabre after Bob's Impala.[1] A featured story on the Impala can be found in Street Machine July 1978. At the time it was still owned by Bob Schoonoven. By then the top had been chopped, and the doors had been suicided. According to that story the front and rear had been extended 18 inches. That version of the car had been painted in a burnt candy orange. The upholstery was gold crushed velvet and the dash was handmade, The seats came from a 1969 Chevrolet Corvette. Power came from a stock 283 Chevrolet V-8 engine that had been dressed up with a lot of chrome. According to the story, Bob had $13,000 in the car, and he had won People's Choice award in every show he attended.[2]

The car was later owned by Chuck Mathis of Roseburg, Oregon. According to Dick Page, Phil Schiefer had chopped the top and painted it pearl white with gold pearl and hair paint panels by then.[3]

In May of 2012 Bob Huffman was able to locate his old custom. By then it was in the collection of Mike "Blackie" Gejeian in Fresno, California. On June 8, 2015 Bob went to visit Blackie to see the Chevrolet for the first time in 46 years.

In 2016 Mike "Blackie" Gejeian passed away. In May of 2018 David of Ontario, California bought the old custom from Blackie's granddaughter. David cosmetically cleaned the car up before he installed new hydraulics and more period correct tires, and put it on display at the 2019 Grand National Roadster Show in Pomona California.

David has now decided to downsize his collection, and is putting the Impala up for sale. He is currently looking for a good home for the historic custom, so if you're interested you can reach David direct at 626.216.6399. The car runs and drives good. It has a new hydraullic set up, and according to David, it rides smooth. He also has the old set up that will go with the car. It comes with a clean and clear California title. Serious buyers/bidders only please. We reserve the right to end auction early as the car is listed locally for sale as well.
for more pictures go to;
https://kustomrama.com/wiki/Bob_Huffman's_1965_Chevrolet
or
https://drive.google.com/open?id=1Q4nU7ZyjsLI01eNF8vJYKp3oQO5xg8m3 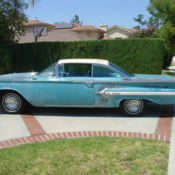 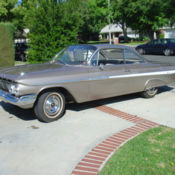 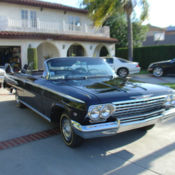 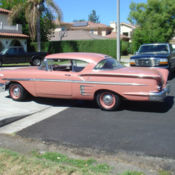 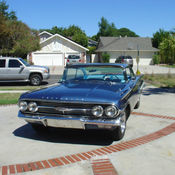 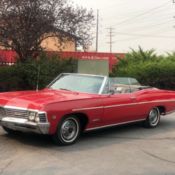 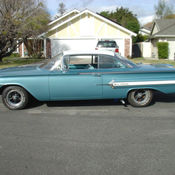 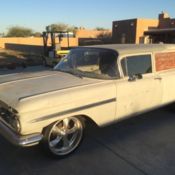 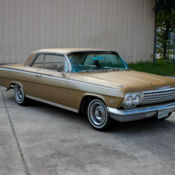 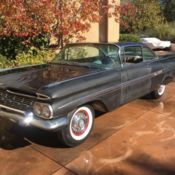