After witnessing the visual magic of this 1969 Chevrolet Camaro RS for the first time, your next inclination might well be to wonder if it's got the muscle to back up its singular look. Rest assured that it does. This masterfully customized muscle car has only ventured a short distance since its thorough restoration not only equipped it with celestial curb appeal, but also with a potent, rumbling big block under its scooped hood. All focus... is certain to be turned its way when this vintage Chevy comes into view. With the already high impact of its exterior amplified even further by a blacked-out front grille, tinted cabin glass and flat black bumpers both fore and aft, this is a classic that simply demands attention. Its glossy black paint defies the color's tendency to magnify any flaws it may carry - there are no major blemishes to be found here and a simple buff and wax session will elevate things to an even higher level. The emblem free appearance of the front grille with its hidden headlights adds an even stronger touch of customization to the mix and as you follow the contour running across the middle of the hood toward the windshield, the cowl scoop serves notice that there's some serious power lurking just below. Its tastefully inclined stance makes it seem like this Chevy classic is coiled and ready to strike at any moment. All this flash comes with no compromise to precision - the exterior alignment looks great as well. The stare inducing exterior pairs with an interior that's been thoroughly restored in largely factory configuration and it's a very compelling combination. The front buckets and rear bench seat wear black and white houndstooth check covers that mirror the signature configuration of the upper crust Camaros of the era and are nice and clean as they loom over fresh black carpeting. A woodgrain steering wheel is perched on the column, and just beyond it the dash area and center console are both in top condition, with the former harboring an assortment of Classic Instruments gauges that have been seamlessly installed in place of the originals. The added Vintage Air climate control system cools the cabin via in dash vents for a nice, finished look, while a retro radio offers USB connectivity for added audio options. Just as the aggressive appearance of the hood would have you believe, there's a monster of a motor standing by in the compartment in the form of a 454 cubic inch V8 that's been armed with aluminum heads, as well as an Edelbrock intake manifold and 4-barrel carb. It sits in a very nicely detailed engine bay with its chrome valve covers and air cleaner polished to perfection and is surrounded by an array of fresh hoses and top tier components that include aftermarket headers, an HEI ignition, a Wilwood brake booster and a sizable aluminum radiator that teams with a pair of electric fans to keep temperatures down. The accompanying 5-speed manual transmission puts full control of its considerable power in the hands of the driver. This classic Camaro is not only about straight ahead acceleration - it offers an impressive overall driving experience, with added tubular A-arm front suspension, smooth power steering and power brakes that feature discs up front. Those brakes also add more eye candy to a car that's already absolutely chock full of it as their painted red surfaces peer out from a set of 17" Rally wheels wrapped with BF Goodrich G-Force tires. Maximum visual impact and boundless power make this 1968 Chevrolet Camaro RS an absolute "must see." Call today! 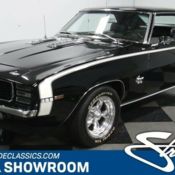 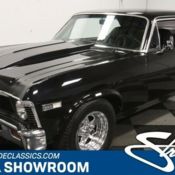 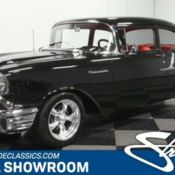 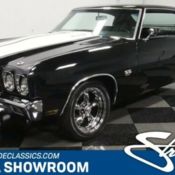 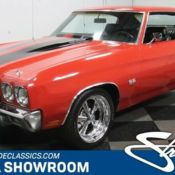 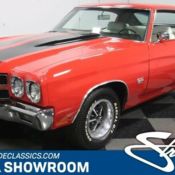 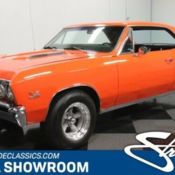 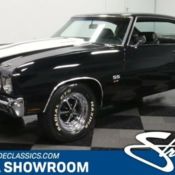 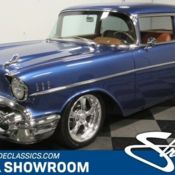 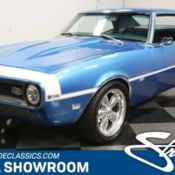