If GM had unlimited time and money to spend building cars, perhaps every 1967 Chevelle would have looked as good as this bright red SS396 convertible. It's a real code 138 SS and thanks to a stunning restoration with a few smart updates, it makes grown men stop in their tracks. If you're going to build a car that looks this brilliant and attracts this much attention, it had better be able to back it up. Fortunately,... it's a real-deal SS396, so those looks should probably serve more as a warning than an invitation. Either way, this car is going to have eyeballs all over it wherever it goes, and the paint is just the beginning. The bodywork is crisp and smooth, with great character lines running through the side panels and good alignment on the doors. A stock hood with bright chrome inserts is far cooler than any generic cowl-induction piece would be, and the simple Chevelle look is only enhanced by the lack of a roof. The correct badges and emblems are retained and this car comes by the SS grille legitimately, so you don't have to worry about people calling it a fake. There's also nice chrome on the bumpers, shiny stainless around the windshield, and a nicely finished posterior, which is the view most folks will see on the street. If you're able to get close to this beast, you'll be happy to learn that the interior lives up to the standards set by the bodywork. New upholstery on the seats and door panels, a center console with a proper 4-speed shifter, and a handsome 3-spoke steering wheel that almost looks stock, but isn't quite. Sharp-eyed viewers and Chevelle experts will note that this is a factory A/C car, which is always a pleasant upgrade, and the center console still houses its original "Gas Master" vacuum gauge, ostensibly designed to improve fuel economy. The rest of the instrument panel is very nicely detailed, with shiny knobs and crisp gauges plus an AM/FM stereo radio in the center. Overhead there's a brand new black convertible top with correct plastic rear window, and the fit is so snug and wrinkle free that you could bounce the proverbial quarter off its surface. The trunk is also nicely finished with spatter paint, reproduction mats, a space-saver spare just in case, plus an Optima battery and master cut-off switch. That big block under the hood is a 1969-dated 396 cubic inch V8 that may look somewhat stock at a glance, but delivers the goods in a big way. A Weiand intake with a Holley 4-barrel makes the intake side, a Mallory Unilite distributor lights the fires, and a set of long-tube headers and a mandrel-bent Flowmaster exhaust system handle the exhaust. All told, it makes this a ferocious car on the street, but one that's happy enough idling in traffic and running pump gas, the perfect combination. It's also nicely detailed with Chevy Orange paint, a few chrome items, and lots of new equipment, including all the lines and hoses, brake master cylinder, power brake booster, and the aluminum radiator up front. The underside is extremely clean, with a 10-bolt rear end hanging just ahead of a new gas tank. It gets that awesome stance from a set of slick Torque Thrust wheels wearing staggered 225/40/18 front and 255/30/20 rear Toyo performance radials. Frame-off restorations aren't cheap, and if they didn't have to keep up with an assembly line, I bet the guys who built this car back in '67 would have wanted every Chevelle to be this amazing. Call today! 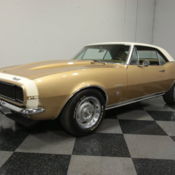 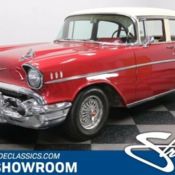 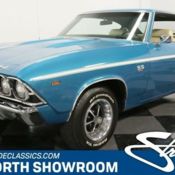 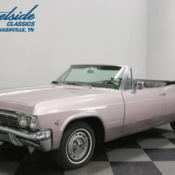 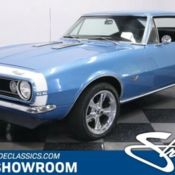 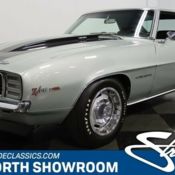 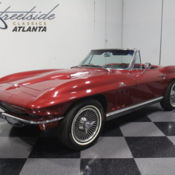 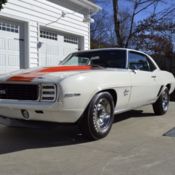 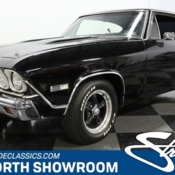 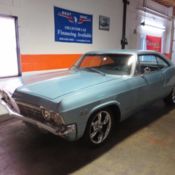