Looking for a distinctive classic ride that will give you the last word in asphalt torching power while still offering plenty of curb appeal? Pull up at any stoplight in this 1970 Chevrolet El Camino SS 454 Clone and you're covered. It's carrying a level of rumbling big block power under its hood that puts it in truly rare company and its magnetic exterior color makes it look like it's already flying even at a standstill. ... With the candy apple red shade draped over its exterior accented with white racing stripes, this El Camino will remind you of that one particular Hot Wheels car of yesteryear that everyone clamored for when it was busted out, simply because it just had to be seriously fast just by virtue of its color alone. It's a head turning look for sure, though some freshening up in the paint booth would bring out its best. Despite its nearly half century of service, its body remains reassuringly solid - have a look at it from all angles and you'll see that the gaps surrounding its hood and doors are tight and even and both latch solidly and open and close smoothly. The gracefully subtle scoop on its hood is fully functional - ushering cold dense air into the monster of a powerplant waiting just below - and a pair of hood pins are a nice finishing detail as they add to the view from the front. The burgundy interior provides a fine driving environment to put this classic through its paces and its combination of factory buckets that straddle a center console carrying a distinctive Chevy horseshoe shifter is a rare one to come by. An updated steering wheel sits on the tilt column with a nicely sized tach perched within easy view to keep tabs on RPMs, and just beyond it the factory-issued instruments in the dash are joined by a trio of aftermarket gauges sitting just below a Nitrous Oxide badge - another proclamation of this Chevy's outstanding accelerative ability. A JVC AM/FM cassette player is on hand to bring its era appropriate technology into play, combining with aftermarket speakers and two 12" pioneer subs to fill the cabin with sound. The bed area in back offers a good amount of cargo space and its surrounding walls and inner wheel wells are in good order. You'll hear a deep resonant exhaust note as this vintage Chevy draws near, but it only hints at just how much power it's carrying. The 468 cubic inch big block sitting in the engine compartment features a host of top of the line components, including a Holley 850 double pumper carb, ported Corvette heads and an Edelbrock Victor Jr. intake manifold, to bring its output to a truly epic level - estimated to be at over 700 horsepower, thanks in part to the nicely detailed nitrous kit that's also on board. The 3-speed automatic TH400 sitting just behind it has been understandably beefed up to handle what comes its way, and with 4:11 gears in back, the off the line acceleration at your disposal is astronomical. Traction bars and air shocks have been added in back to make sure all that power gets properly applied to the pavement. Smooth power steering makes this unusually powerful ride easy to navigate and power brakes that feature discs up front bring it to prompt stops when called upon as it works its magic on a set of 15" American Racing wheels outfitted with Hoosier Radial G/T tires. You don't see all that many El Caminos on the road anymore and certainly almost none that can offer anywhere near the outstanding power of this 1970 Chevrolet El Camino SS 454 Clone. Call today! 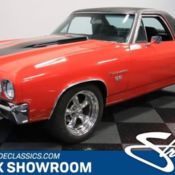 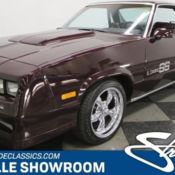 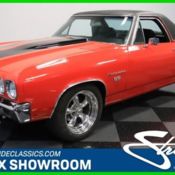 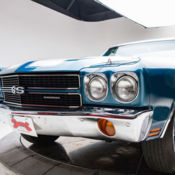 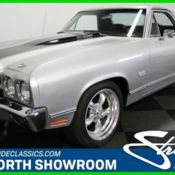 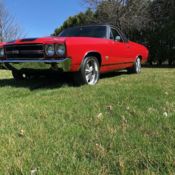 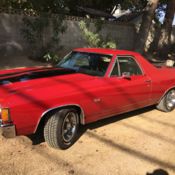 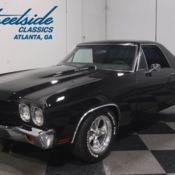 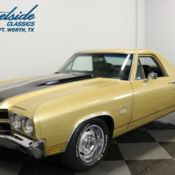 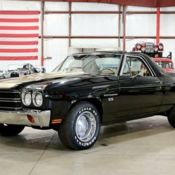