Clean summer drivers don't get much better than this 1966 Chevrolet Chevelle Malibu hardtop. With a 283 cubic inch small block V8, it's plenty entertaining to drive, while the bright red flanks look great hammering down the highway. Freshly reskinned for 1966, Chevy positioned the Chevelle (the Malibu was a trim option on the Chevelle in '66, not a separate model) as a car that could do anything. With a wide variety of engines, transmissions, body... styles, and options, it could be anything from an economical commuter to a scary fast track terror. This one seems to have landed somewhere in the middle, and if you're anything like me, you're probably pleased to see that this one hasn't been over-dressed in fake SS livery. Code R Regal Red was the car's original, and it was a few shades darker than the current color, but who can argue with the way this car looks today? A simple full-width front grille emphasizes the car's basic integrity, and has been nicely preserved. Chrome on both bumpers is good, and the stainless sure looks like well-maintained original stuff. The only notable modification is the cowl-induction hood, but we'll bet nobody will complain about that little detail because it looks great. Like the body, the interior appears to have been restored as needed, and today combines original and replacement components. Dressed in classic black, its simple, elegant design shows you what Chevy was aiming for in '66, with a full-width speedometer, and simple high-mounted controls for things like the lights and wipers. The seats are in good shape, with the only significant wear item being a bit of scuffing on the driver's side where you would climb in and out of the car. Carpets still look new, thanks to a set of heavy-duty rubber floor mats, and the console features the shifter for the PowerGlide automatic transmission and a set of auxiliary gauges was mounted down low in the traditional fashion. Upgrades include an AM/FM/cassette stereo and factory A/C to keep things cool. The very clean trunk has also been upholstered with black carpets, giving it a very tidy look. Under the hood there's a 283 cubic inch V8 with all the traditional hot-rod parts, including an Edelbrock 4-barrel carb and intake manifold and an HEI ignition system. Bathed in a bright coat of Chevy Orange, the engine looks very fresh with not much use since it was finished. Chrome valve covers and air cleaner add some flash to the otherwise very stock-appearing engine bay. Power steering and power brakes are part of the package, making this Chevelle a pleasure to drive. It's backed by the aforementioned PowerGlide and a 10-bolt rear end. The floors have been undercoated for protection and sound control, and the exhaust system features mandrel-bent tubing and a pair of Flowmaster mufflers. It runs and drives quite well and rides on a set of traditional Chevy Rally wheels and staggered 215/65/15 front and 255/60/15 rear blackwall radials. This is a great car for people who like to drive. Get in, turn the key, and start enjoying it immediately. Don't let this one get by because nice Chevelles are getting more difficult to find all the time. Call today! 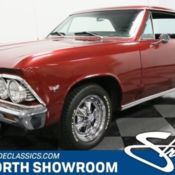 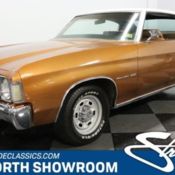 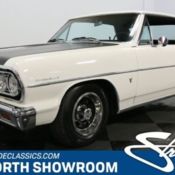 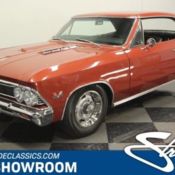 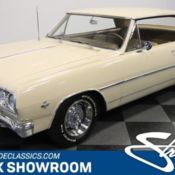 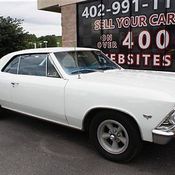 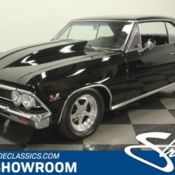 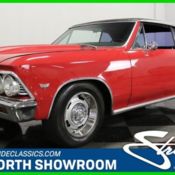 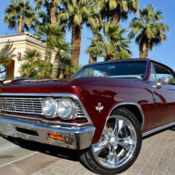 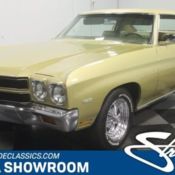