The muscle cars that seem to be gaining traction in the market are those that capture an old-school look and feel but deliver a few modern upgrades for comfort. This 1968 Camaro RS coupe is just such a machine; a clean RS with a 5-speed, cold A/C, and a brutal look, all restored to look and drive just the way it did back in the day. Following a 5-year restoration that rebuilt the entire car practically at the molecular level, this neat Butternut Yellow coupe looks great. You can imagine the soul-searching the owner must have faced with a super-clean Camaro shell that could be anything he wanted, but he wisely chose to put it back the way the factory built it, although original code R Matador Red is an easy path to follow. The smooth paint hugs the shapely Camaro bodywork and gives it a subtle look that actually works really well, and you can see in the photos just how straight it really is. A black stripe around the nose works rather well and without the usual Z/28 stripes, the cowl induction hood almost looks subtle. The Rally Sport package, as you undoubtedly already know, includes the awesome folding headlights that give the Camaro a totally unique look, as well as some special badging, different taillights, and back-up lights moved to the rear valence. The rear spoiler gives it a purposeful look and the chrome is so brilliant that it's probably better than new. The black and white houndstooth interior also sticks to the factory recipe, and it's kind of cool that even this '60s upholstery looks upscale to us today. The buckets are in good condition, showing only very minor signs of use, and again, they resisted the urge to add options or customize things. Then again, the Camaro's interior is so stylish that it really doesn't need the upgrades to be a great place to spend some time. You'll note this is a factory A/C car and that upgraded 5-speed uses a shifter that looks like it could have been born there. The factory gauges are in beautiful condition, with a tach in the dash and auxiliary dials down on the console (those were actually two separate options). This is a factory A/C car, so everything was already there, but it's now powered by modern hardware working behind the scenes. The trunk was also nicely detailed with a reproduction mat and matching spare tire assembly. The 350 cubic inch V8 under the hood looks like it belongs there, although it's a CKL suffix code engine dating to 1973. It was bored .030 oversize during the rebuild and now makes an estimated 350 horsepower, so it's extremely entertaining to drive. It was also detailed for show with Chevy Orange paint, a chrome air cleaner assembly, and finned valve covers that really look great. An Edelbrock carburetor lives on a Winters intake manifold from a Z/28, and there's a Mallory distributor to light it up. The 5-speed manual shifts nicely and the heavy-duty 12-bolt rear is surrounded by a fresh exhaust system with transverse muffler. The satin black floors make a fantastic background for the nicely finished chassis and simple painted steel wheels with F70-14 Goodyear Polyglas tires complete the no-nonsense look. This is how most Camaros wish they could look, and with V8 power and a 5-speed, it'll probably attract more attention at shows than all the over-done SS clones you see every day. Call now! 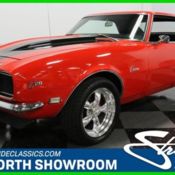 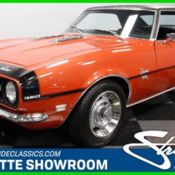 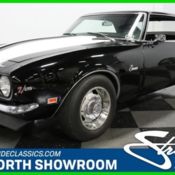 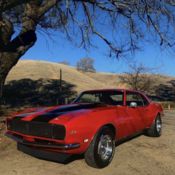 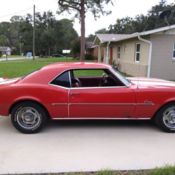 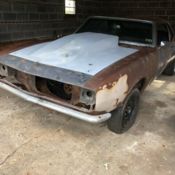 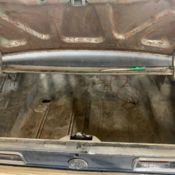 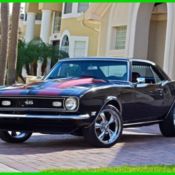 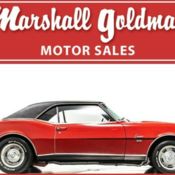 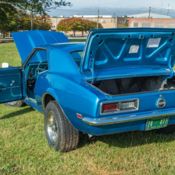