Cool sport trucks aren't a new invention, but many times they're so over-styled that they stop being practical as trucks, and what's the point of that? This 1986 Chevy C10 looks like those pickups you see on magazine covers, but can still do a few odd jobs around the house and drives well enough to take cross-country. OK, so the ride height and oversized wheels suggest that you won't want to be hauling gravel with this one, but you can't argue with the look. The simple white paint isn't actually paint, but primer that's been flattened and sanded to give it a ton of patina that contrasts brilliantly with the slammed stance. The look is understated, yet makes a bold statement, and there's just no way to ignore this truck when it shows up. But don't make the mistake of thinking this is some junkyard dog, because the sheetmetal underneath is quite good and you can easily tell that the weathered effect is totally intentional. Look closely and you'll see that there was a lot of care involved in making it fit together, although perfection wasn't necessarily the goal. Remarkably, this truck gets its trick look with only a few alterations, including some shaved badges, and the only notable non-OEM piece of hardware on the truck is the rear roll pan out back. Much of the trim is original, including the front, and you'll note that there are no identifiers anywhere on this truck, not even a bowtie emblem on the grille. In back you'll find a nicely done spray-in bedliner as well as the air ride suspension system and Optima battery. This truck was an up-market Silverado from the start, so that means it's loaded with options and a comfortable cockpit is part of the deal. A set of production buckets with custom black and orange upholstery work with OEM door panels that are in good order, and the combination works perfectly with the white paint. Gauges have been upgraded to a full array of white-faced Auto Meter dials in a custom panel that fits into the original dash, and there's a wood-rimmed wheel on the original tilt column. A new AM/FM/CD/iPod head unit and speakers throughout the interior ensure you'll be entertained while you cruise and power windows and locks are part of the package. New carpets, custom kick panels, and a trick shifter all give it a unique feel when you're behind the wheel. A 383 cubic inch stroker motor was built with the good stuff so this lowrider runs as great as it looks. Aluminum heads, an Edelbrock intake, ProForm 4-barrel carburetor, and electronic ignition all make it feel more like a Camaro and less like a pickup truck. It's nicely dressed with some aluminum valve covers, but for the most part, it was built to run. Obviously the inner fenders were removed to make room for the lowered stance and giant wheels, but the hardware is familiar, including a big aluminum radiator and a GM power master cylinder. The exhaust is brand new and uses turn-downs ahead of the rear axle for obvious reasons, and the air ride suspension was professionally installed so that it rides well and works like it should. A TH350 3-speed automatic spins a 10-bolt rear end, and the reliable powertrain means that cruising should always be a pleasure. It also appears to be wearing new shocks all around, plus those giant 24-inch Vision wheels with 255/60/24 performance radials. We've got plenty of cool trucks in stock, but few of them combine the slick looks, functionality, and mind-blowing stance of this C10. Call today! 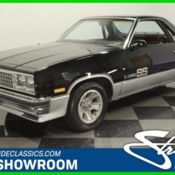 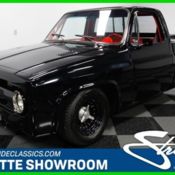 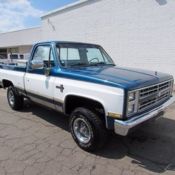 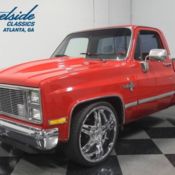 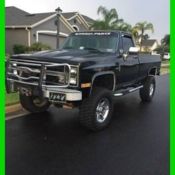 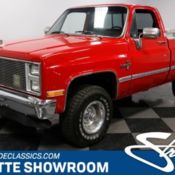 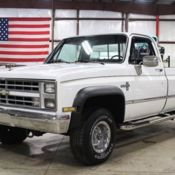 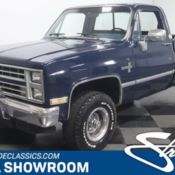 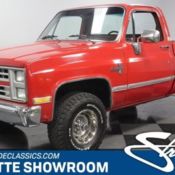 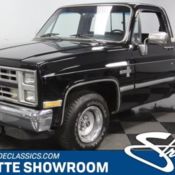