This is a 2 owner fully documented Camaro SS. Car was purchased on July 21, 1969. I have the original invoice and the protecto plate. This is not a recreation or clone SS. I bought the car from the original owner and it underwent a frame on restoration at that time....about 15 years ago. It was stored in his garage for 17 years after he quit driving it. The car was sent to a body shop and needed a new trunk pan, the door bottoms were patched. The rest was solid. A new full trunk pan was installed and 2 NOS doors were located and installed. Not reproduction doors but original GM doors. Car received a new deluxe houndstooth interior, carpet and dash pad after receiving a great coat of Hugger Orange paint.

Car now has a Muncie 4 speed transmission attached to the original numbers matching 350 engine which also received a complete rebuild to stock specifications. A new brake booster, aluminum radiator, period correct rally wheels, headers with flowmasters and console gauges were added. Front spoiler was added but has a crack in it.....cheap to replace. Original radio is still there but not wired as I had a deck in the glove box. The rear deck speaker are dried out, likely from lack of use or sitting.

I have all the removed pieces including the steel wheels, wire hubcaps, exhaust manifold, automatic transmission, radiator, brake booster, horseshoe shifter and cable, so this car could be easily brought back to reflect how it was bought, per original invoice, using the actual original parts. I even have the original bumper guards.

This car runs great, original engine starts right up a purrs, transmission shifts great and is a blast to drive. The body is straight, gaps are real nice and paint still shines. This car has about 2500 miles since restoration. Sits in my garage 99% of the time except for the occasional ride. It is started regularly and still has its oil changed every year.

It is an older restoration and could use a new or rechromed rear bumper as the chrome is peeling around one of the bolts. There is a few small bumps under the vinyl roof at the lower rear sides so that would need attention. Tires are fine, good thread but older.

These cars are hard to find in unmolested condition and documented original versions even harder. This car could easily be made original right down to the wing nut on the breather, backed up by the original dealer invoice and protecto plate. A desirable color combination, supporting documents make this car even more attractive.

Car runs strong, is comfortable and fun to drive, tracks and rides perfectly. All gauges, lights, wipers work as they should. This is a great example of an ORIGINAL CAMARO SS without doubt.

I have included the maximum allowed pictures (24) but can send you more if you wish. Ask any questions before bidding...I can be reached at 613 858 6927. Leave a message if you get voice mail and I will return your call promptly. Car is located in Ottawa, Ontari, Canada about 40 minutes from the N.Y border, zip code 13669.

I will assist as much as I can to facilitate getting the car to the winning bidder. Car is in my name and has a clear title. Car is licensed and insured currently.

Car is offered locally with reference to this ebay listing so I reserve the right to end the auction should an acceptable offer be received prior to the auction ending.

I am selling this car after about 15 years of ownership as I do not drive it enough. It sits in the garage 99% of the time which is a shame. I am older now and prefer to have modern comforts when I go out.....It is a Garage queen and needs to go to someone who will appreciate it and give it the attention it deserves. This car runs and drives like a charm and could simply be driven as soon as the buyer gets it.

I can bring the car to Ogdensburg New York 13669 which is 40 minutes from my location in Canada to facilitate pick up by the buyer or the shipping company. I understand it is more expensive if the transport company has to cross the border and the expensive paperwork it would require ...so this option would make the purchase easier for US bidders.

To answer common questions received, the car has travelled about 2500 miles since the restoration so the drivetrain has 2500 miles since it was rebuilt. The engine and transmission run perfectly, no issues. The engine is the original, numbers matching engine.The odometer was reset to 000000 when the car was restored so this is easily known.This car is mostly original including the original quadrajet carburetor which was rebuilt as part of the engine rebuild. All parts which were replaced such as headers, radiator, wheels, automatic transmission, horseshoe shifter...etc. were kept in storage and are included with the car so this car could be easily returned to 100% original using the actual original, date correct parts. 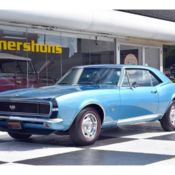 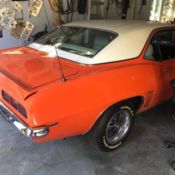 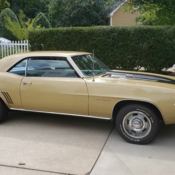 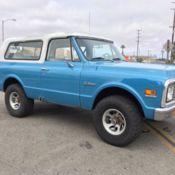 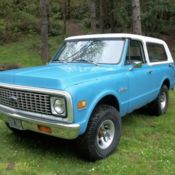 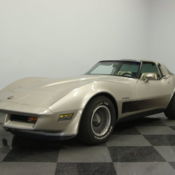 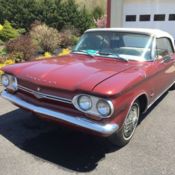 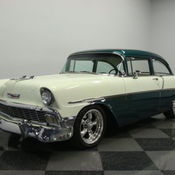 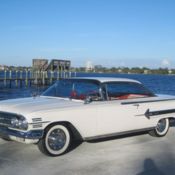 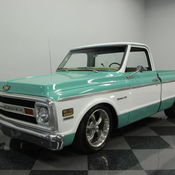