Classic Chevy Impalas are about as closely associated with car culture as asphalt itself and in its early days the model went through a fairly unusual trajectory, graduating through its first two generations in just three years as Chevy sought to get things just right. In addition to its eventual ascendance to boulevard aristocracy, the car would go on to set sales records, and specimens like this 1961 Chevrolet Impala Bubble Top, with its distinctive vintage styling, played a huge...Â part in setting the stage for that success. Representing the third generation of its model, this '61 is noticeably trimmer than those before it, especially as far as its more reined in rear fenders and tail. The sharp looking Victory red shade it wears sits in place of its original beige paint, adding a substantial amount of visual impact over its predecessor. You'll notice its unique "Bubble-Top" styling right away. The aggressively-curved front windshield and sizable pillarless sides really make it stand out in a crowd - especially with the windows rolled down. Impalas of this era feature prominent stretches of trim on their sides that widen into contrasting panels toward the back to proudly display scripted "Impala" logos and they're looking particularly sharp here. Up front, the grille - with its pair of dual headlights and long horizontal ribs - sits nice and level, while in back, the dual triple taillights look very fresh as they straddle a great looking Chevy emblem mounted on the center of the deck lid. The interior has been refurbished in red and white cloth that's very much in keeping with this classic's vintage identity while adding an air of customization. The bench seats in front and back are still in good shape, sporting plenty of padding underneath their tuck roll surfaces that are matched by the door panels and quarter trim in back as they sit over an expanse of still-fresh red carpeting. The dash area features chrome accents that provide a great contrast to the red steel just behind them, and its factory gauges - all of which are functional - are joined by a column mounted tachometer and oil pressure gauge that fit in nicely with the assortment of control switches on board. A level and uncracked dash pad sits just above. The trunk area in back is roomy, bordering on cavernous, and with no lining covering its floor, you can see that it's in solid shape. Underneath the hood a 409 cubic inch V8 sits at the center of one seriously clean engine compartment, sporting a Holley 4-barrel carb underneath its chrome air cleaner and a pair of chrome valve covers on its sides. The engine was one of the premium powerplant options when this Impala came out and it's in great form here, providing plenty of pickup, as well as a very appealing exhaust note, and it's paired with a 3-speed automatic TH400 transmission that's shifting with slip-free precision. The brake system has been upgraded with power disc brakes at all four corners for fade resistant stopping power and with new rear shocks recently installed, this vintage Chevy rides impressively well. Power steering makes for easy navigation as this iconic cruiser prowls the asphalt on its 15" wheels outfitted with BF Goodrich T/A radials. The undercarriage below is quite a sight - it would be considered reassuringly solid for any vintage car, let alone one that's more than 55 years old. This 1961 Chevrolet Impala Bubble Top represents the rare opportunity to own a nostalgia-inducing classic that's looking sharp and is ready, willing and able to hit the road just as soon as you bring it home. Call today! 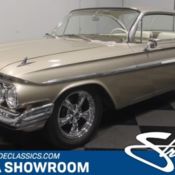 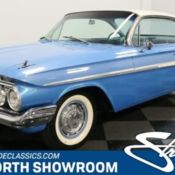 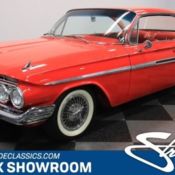 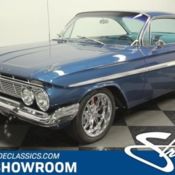 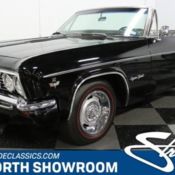 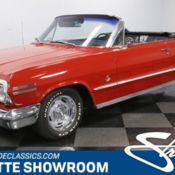 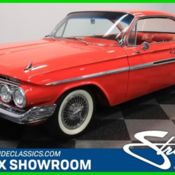 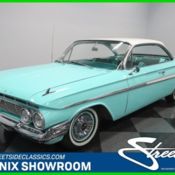 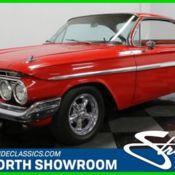 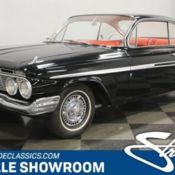